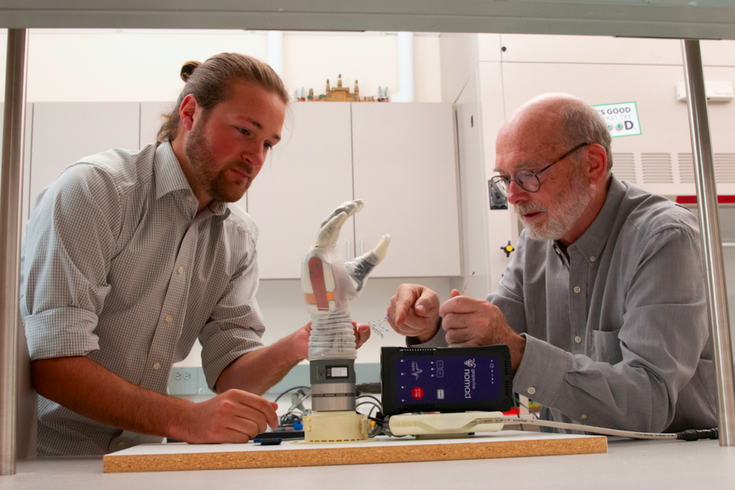 Scientists have engineered a high-tech prosthetic arm that provides a sense of touch to its users – some of whom had not felt that sensation in years.

The LUKE Arm – named after the robotic hand that Star Wars character Luke Skywalker receives in "The Empire Strikes Back" – mimics the way humans feel objects by sending and receiving signals from the brain.

That enables the arm – complete with a hand and fingers – not only to move with a person's thoughts but also to feel the objects being touched. Users can sense the hardness of an object, better understand how to pick it up and complete delicate tasks that are difficult to manage while wearing a standard prosthetic.

The arm is being developed by a team headed by Gregory Clark, a biomedical engineering associate professor at the University of Utah. The researchers' latest findings were published in the journal Science Robotics.

So far, seven people have tested the LUKE Arm, include Keven Walgamott, who lost his left hand and a portion of his arm in an electrical accident 17 years ago.

Using the device, Walgamott was able to pluck grapes without without crushing them and pick up an egg without cracking it. He also held his wife's hand, gaining a sensation similar to those felt by abled-bodied people.

"It almost put me to tears," Walgamott said in a story published by the university. "It was really amazing. I never thought I would be able to feel in that hand again."

The prosthetic itself was developed by DEKA Research and Development Corp, based in New Hampshire. It is mostly composed of metal motors covered by a clear silicone skin over the hand.

Another system – developed by Clark's research team – enables the the prosthetic to send and receive signals through a bundle of 100 microelectrodes and wires. This bundle, which relies on sensors in the prosthetic hand, is implanted into the user's forearm nerves and connected to an external computer. 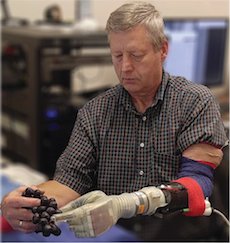 Keven Walgamott uses the LUKE Arm to pluck grapes – a task that is impossible with standard prosthetics.

Recreating signals that could be correctly interpreted by the brain was a significant accomplishment, Clark told the university. When a person touches an object, a burst of impulses shoot through the nerves to the brain before tapering off.

"Just providing sensation is a big deal," Clark said. "But the way you send that information is also critically important and if you make it more biologically realistic, the brain will understand it better and the performance of this sensation will also be better."

The system also can replicate temperature and pain.

For now, the LUKE Arm must be wired to the external computer, limiting the user's ability to move. But the team is developing a portable version that will connect wirelessly.

The team anticipates three test subjects being able to take home the state-of-the-art prosthetic in either 2020 or 2021, pending federal regulatory approval.