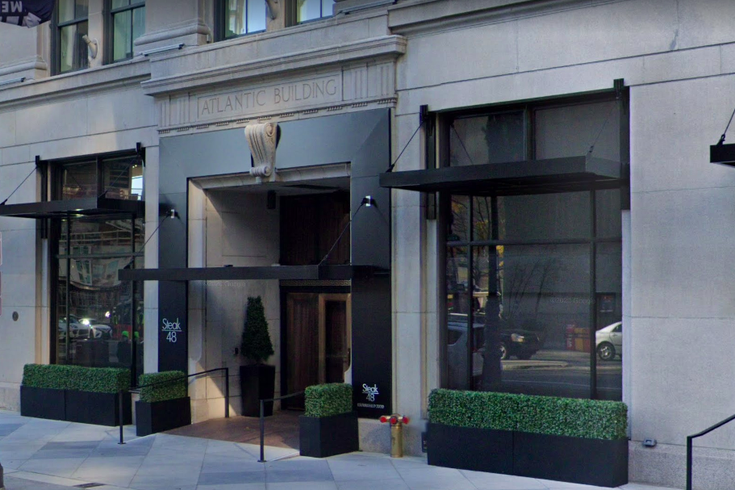 Steak 48, located at 260 South Broad St., opened its Philadelphia location last September. The upscale restaurant has been criticized for implementing a $100 per person minimum and a strict dress code.

With most pandemic dining restrictions set to be fully lifted in Philadelphia next month, there's been a sense of exuberance about the return of uncomplicated nights out at local restaurants.

Normalcy may be nearing, but for many in the restaurant industry, the hardships of the last year and the revenue impact of COVID-19 won't go away overnight. As these businesses find ways to create a sustainable path forward — balancing the needs of the bottom line, their employees and fickle customers — there's a risk that one false step could become a public relations fiasco.

That's been the story this week at Steak 48 in Center City, where the upscale restaurant imposed a $100 per person minimum — not including tax and tip — and implemented a strict dress code, banning casual attire and "marijuana odors," among other unwanted garb.

Reaction to the policy on social media was a usual mix of harsh and hilarious, but many were simply off-put by Steak 48's presentation of the rules as a way to ensure a top-notch experience.

They said no brokies 😭😭😭😭 #Steak48 no more appetizer dates and step photos pic.twitter.com/yk2Tf64KxH

That’s $98. Am I getting arrested? pic.twitter.com/sFnPJxdb3z

So, if Steak 48 is going to charge a minimum $100 per person, then does this mean they will be raising wages for the employees too?

This is the dress code for Steak 48. #Steak48 pic.twitter.com/YDswilVe9V

Steak 48 is a family-owned chain operated by brothers Jeffrey and Michael Mastro. It has four other locations in Houston, Chicago, Phoenix and Charlotte, some of which also have imposed the new $100 minimum and dress code.

The Philadelphia restaurant opened across from the Kimmel Center last September, right before the city was hit with another crushing wave of COVID-19. The business shut down after two months and didn't reopen until the end of January.

A restaurant staff member contacted Wednesday called the online outrage "ridiculous," adding that people were not trying to understand the policy from the perspective of Steak 48 or the industry as a whole.

To be clear, Steak 48 is a fine dining establishment. It isn't a stretch to get to $100 per person by any means. Pricing at the Philadelphia location ranges from $48 for a small 12-ounce New York strip to $74 for an 18-ounce bone-in filet mignon. That's before you consider appetizers, sides, cocktails or desserts. It's certainly possible to spend under $100, but a typical bill would pretty easily cross that mark — whether at Steak 48 or any other upscale steakhouse in Philadelphia.

That's partly why the policy reads as a bit of a code for the kinds of guests the restaurant wants to attract. The business can seat up to 450 people. It's doubtful that those spending under $100 were keeping out wealthier and free-spending patrons.

Representatives for Steak 48 did not return a request for more information about the $100 minimum as of Thursday afternoon. In a statement obtained by CBS3, the company indicated the policy was about both the guest experience and keeping the business alive.

"Like many restaurants in our industry, we've had to make some updates to our policies, like the $100 per person minimum in effort to support our staff and restaurant's operations, and provide the ability to be successful as a steakhouse designed for the full sit-down experience," the company said.

In Chicago, where there's been a similar outcry about Steak 48's policy, a local public relations professional told Crane's Chicago Business that the restaurant's policy was "counterproductive" in creating a sense of exclusivity and targeting affluent customers.

And Darren Tristano, CEO of Chicago-based research and consulting firm Foodservice Results, added that he felt the policy could backfire if Steak 48 doesn't offer something truly unique.

"My guess is, they don't have anything that can't be replicated," Tristano said. "There's way too many steakhouses out there and restaurants to go to have a nice experience, and that's going to be a learning experience for them."

What's happening at Steak 48 is a high-end microcosm of the pressures facing restaurants around the country.

The Pennsylvania Restaurant and Lodging Association represents hundreds of members, from small independent restaurants to large, fancy hotels. They provide money-saving programs, advocacy and other resources to help businesses compete and sustain their success.

The trade association has been around since 1937 and often has worked to connect members with their peers to discuss best practices. During the coronavirus pandemic, PRLA temporarily discontinued billing for membership in order to pivot toward connecting struggling businesses with COVID-19 assistance programs. They played a key role in shaping the $145 million CHIRP legislation that has provided grants to hospitality businesses across Pennsylvania, and they have continued to press for more assistance from the state.

A PRLA spokesperson said the organization does not offer commentary on specific restaurant policies, but acknowledged that many businesses have grappled with similar tough decisions throughout the pandemic. Steak 48 is not a member of the trade association.

"We want as many businesses as possible to survive because it has been so challenging for them with the mitigation efforts," the spokesperson told PhillyVoice. "We help them make the best decisions. We can't make them for people, but we can provide information and connect them with their peers or legal counsel. Our members reach out to use numerous services and talk best practices. We encourage businesses to reach out to us."

Consider COVID-19 surcharges, which have been tacked on to some restaurant bills for months to help cover costs for outdoor dining configurations and other revenue impacts. Throughout the pandemic, the PRLA heard from many members who sought guidance on whether to assess this type of fee. In most cases, the inquiries came from urban locations like Philly and Pittsburgh, where tougher restrictions were more likely to squeeze businesses. PRLA believes these fees are not a long-term solution and likely will be on their way out as the reopening continues.

But the trade association stressed the importance of recognizing the diversity of businesses in Pennsylvania and how their locations influence the challenges they face.

The widely reported worker shortage in the restaurant industry actually predates the pandemic and has been intensified by the instability and restrictions of the last year, as many displaced workers seek a different professional path. While urban restaurants have increasingly enticed jobseekers with higher wages, sign-up bonuses, tuition help and other benefits, restaurants in rural communities are hard-pressed to find sustainable ways to increase wages, especially as political pressure builds to create a more fair industry in Pennsylvania and beyond.

The direction chosen by Steak 48 may well have been a calculated risk. Are they really concerned about the opinions of critics who likely would not have been their target customers, anyway? If anyone considers a $100 meal overpriced, the restaurant clearly doesn't covet their business. And given the abundance of restaurants to visit in the Philadelphia region, there are plenty of other places that offer a fulfilling experience for under $100.

It's easy to get carried away with making fun of a business that seems pretentious, and tempting to pile on, but as Philadelphia Magazine's Ernest Owens wrote, this isn't something that needs to impact anyone who doesn't want to spend money at Steak 48.

"To eat at a fine-dining space like Steak 48 is a luxury, not a necessity," Owens said. "Like all things luxurious, it costs to be the boss. Those who aren't willing to dine maturely and tip appropriately should reconsider their entitlement (and arguably their morals). And those who want to get mad on the internet should find a more worthy target."

I’ll take Steak 38 (the steakhouse inside a motel in Cherry Hill) over Steak 48 any day. pic.twitter.com/AMcnS5HZGN