Step back from the ledge: Player grades for New York 3, Union 2 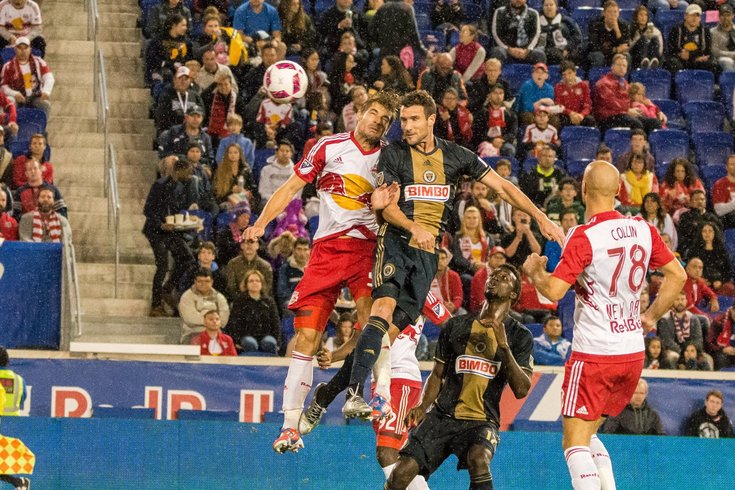 The Union fell to sixth place in the Eastern Conference following Saturday's 3-2 loss to New York.

Ex-NFL coach Jim Fassel has a message for all of you:

In all seriousness, the concern is understood.

This is a team that hasn't won since August. It blew leads in Toronto and New York. Josh Yaro is likely done for the season and C.J. Sapong hasn't scored in a dog's age.

I think you have to step back and consider a few things, number one being that this team has punched above its weight and overachieved for the better part of an entire season. This team doesn't have a goal-scoring striker. There are a bunch of rookies playing significant roles and the leading goal scorer was thought to be physically cooked before the season even began. Vincent Nogueira went back to France. Maurice Edu hasn't played a single game. Jim Curtin has platooned the right center back spot. Ilsinho is on the shelf and Tranquillo Barnetta is still playing at a high level on two bum knees.

Plus, nobody expected the Union to win any of these three road games. They were underdogs in Portland, Toronto, and New York (New Jersey). A win in any of these matches would have been monstrous, but most people predicted one or two points total. They finished with one.

It comes down to October 16th, 2016, at home. If the Union can't beat the playoff-eliminated, lame duck, defensive sieve that is Orlando City, then all of your above complaints will become valid.

To me, the biggest issue in this game was school boy defending. It wasn't even about the New York press, or the road atmosphere, or the weather conditions.

Here's video of the first one:

Sacha Kljestan finds himself wide open from about 16 yards out after a football-style crossing route to get into the box.

He originally has Warren Creavalle following him across the top of the area, but when Dax McCarty cycles the ball back into the corner, Creavalle leaves Kljestan to try to close down Felipe, who is off screen.

Alejandro Bedoya is with McCarty to start the play, but remains static when the ball comes back into the box. It looks like Bedoya turns his head to have a look at the box, but doesn't pick up Kljestan coming across, and ends up in a position where he can't influence the play. 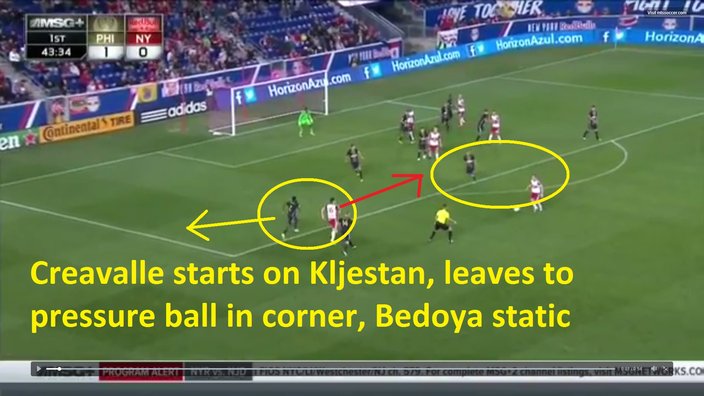 Here's the second goal, which put New York up 2 to 1. It's just a simple long ball over the top of the Union defense:

This one is just wretched. It's horrible. It's awful.

It actually goes back to the type of ball that the Union struggled with in the 3 to 1 home loss against Toronto. You're basically looking at a midfield win for New York, then a quick one-touch clip over the top of the defense. Ken Tribbett and Richie Marquez aren't going to beat Bradley Wright-Phillips in a foot race, and that type of first-time ball will give anybody fits. 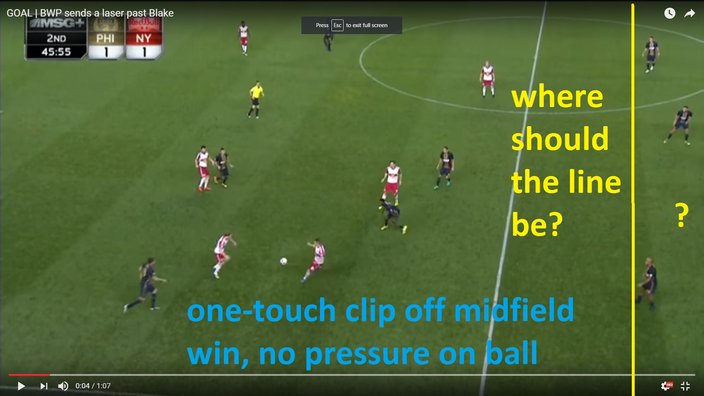 Marquez is actually off-screen here because I think he's sagging with BWP in anticipation of the pass. I'm not quite sure where the defensive line is supposed to be, but it looks pretty loose here.

The third goal, then, is a Dax McCarty free header.

The third goal is a Dax McCarty free header.

McCarty is five foot nine, yet somehow scores a lot of headers for some reason. Maybe it's his ability to get lost in a scrum.

In this case, the play starts with Brian Carroll on Aurelien Collin and C.J. Sapong on McCarty. Carroll is not ball-side of Collin, and instead, holding an offside line right around the 18. 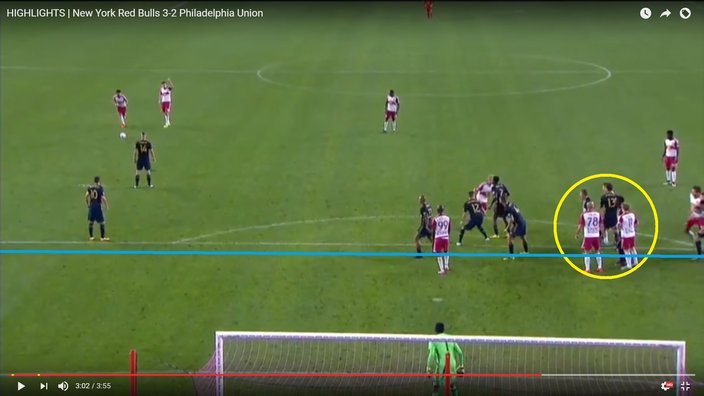 I'm not sure why they would matchup like this to begin with, but it was probably a heat of the moment type of situation where everybody tried to grab a mark. You can see Sapong physically on McCarty and below the offside line that Carroll is trying to hold.

When the play develops, Sapong leaves McCarty and goes to Collin, and Carroll is caught somewhere in between. That leaves McCarty wide open at the back post. 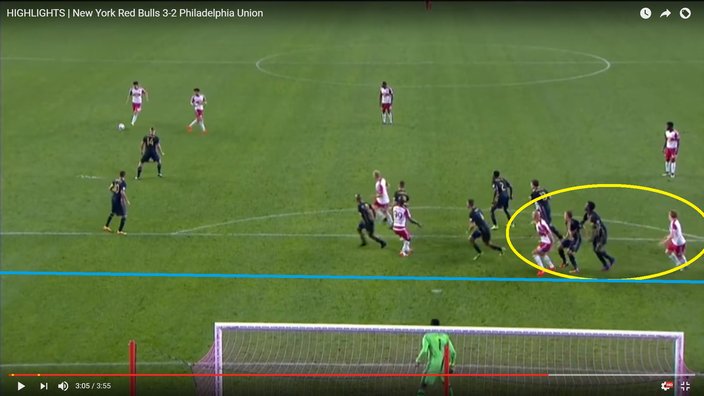 They really, really need to find a way to get him going, or get him some help up top, because he's stranded up there and short on confidence.

This is his chart dating back to the beginning of August:

Even if his goal took a deflection on the way in, it was still well-taken from a smart position.

Herbers was the only Union player with more than one shot attempt in this game. He quickly learned the wide right position and is performing at a high level while other, more experienced players are struggling down the stretch.

Tough game for Barnetta, who only managed one shot, conceded six fouls, and just couldn't impact the match like he normally does. Credit to Red Bull for frustrating him and squeezing him out of the game.

One goal on one shot, one assist on one key pass.

Pontius continues to make the most out of every touch and every sniff of the ball. He has four goals against Red Bull this season and tied his career high with his 12th goal on Saturday.

Shame to see him come off injured. They could have really used his defensive mettle in the second half and instead had to rely on Brian Carroll, who just isn't built for these types of games.

We went over the first goal, where Creavalle probably should have stayed with Kljestan instead of cutting him loose in a dangerous area.

It was a fast-paced, hectic, combative game, and Creavalle fit in pretty well for large chunks of it. He shifted up to the eight when Carroll game in, which pushed him a bit higher and got him involved in more midfield scraps.

He gets the assist on the Pontius goal, which I thought looked like just a generic ball into the box.

I feel like Fabinho gets the “easier” matchup against Red Bull, with Alex Muyl and Chris Duvall coming down the right-hand side. He wasn't culpable for any of the goals.

On the second goal, he's reading the long ball over the top, but just doesn't have the pace to keep up with Wright-Phillips. I'm not sure where that line should have been placed, but maybe he could have played the striker offside by pushing a touch higher.

Otherwise, he logged a ton of clearances and interceptions in this game, and was busy putting out fires for the majority of the night.

He was excellent early, and his departure really changed the flow of the game.

He looked shaky early, with a shanked clearance followed by a weird throw-in that seemed to slip from his hands due to the wet conditions.

Later, while tracking a long pass into the corner, the ball actually struck him and rolled all the way to the end line, resulting in another botched clearance that almost turned into a New York half-chance.

He seemed to settle in as the game progressed and did a decent job of limiting Mike Grella and Kemar Lawrence.

What is this team without him?

He got beat for pace on the Wright-Phillips goal, but so did Marquez, who was at least level when the ball was played.

Offensively, he actually had a great win in the New York box, where the ball fell to Pontius for that ridiculous overhead kick.

Just didn't have it in this game.

He should have come on for Barnetta, who apparently signaled that he was good to play 90 minutes.

So, instead of leaving the excellent Herbers on the field, the rookie came off to let Alberg play an unfamiliar wide position.

The result was a lack of urgency and a couple of crossing opportunities that didn't beat the first man.

Yeah, whatever, he let Felipe get away with some whining and falling down, and maybe New York got the benefit of some calls.

I think he did a good job of containing early emotions and keeping things relatively stable.