“I don’t know why I said this. This was inexcusable. I am truly, truly sorry.”

After frequently attributing his success to his experience escaping the World Trade Center attacks on Sept. 11, 2001, comedian and star of "The League" Steve Rannazzisi admitted Tuesday that the story was a lie, The New York Times reports.

In the past, Rannazzisi, 37, has claimed he was working at Merrill Lynch’s offices on the 54th floor of the south tower when the first plane struck the north tower.

"I was there and then the first tower got hit and we were like jostled all over the place," he told an interviewer in 2009. "I still have dreams of like, you know, those falling dreams."

He fled to the street just minutes before another plane slammed into his building, he said, and decided that very day that life was too precious to waste opportunities. So he abandoned his New York desk job to pursue a career as an entertainer in Los Angeles.

However, when he was confronted this week with evidence that undermined his account, Rannazzisi owned up. 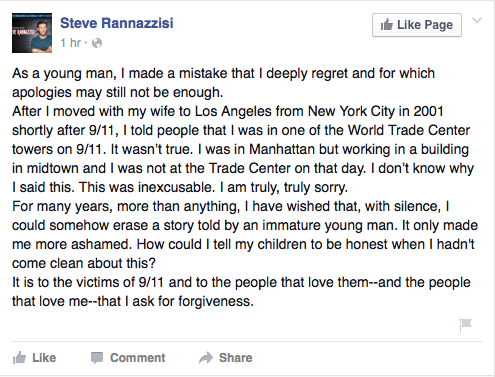 “We are disappointed to learn of Steve’s misrepresentations regarding the events of September 11, 2001,” Buffalo Wild Wings, one of his sponsors, said in a statement Tuesday night. “We are currently re-evaluating our relationship with Steve pending a review of all the facts.”