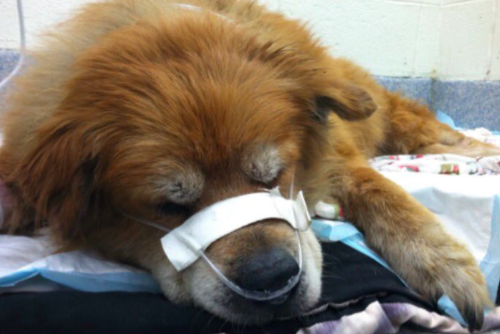 A family in Port Richmond is alive Sunday night thanks to a family dog who alerted them to a spreading overnight fire in their home.

The incident occurred just after 4:30 a.m. on the 3100 block of Memphis Street, according to multiple reports. The homeowner, identified by 6ABC as Andrea Bulat, awoke startled when her dog Che began barking incessantly at an unusual hour for him.

Firefighters who arrived at the scene found Che — a retriever, by the looks of him — unconscious on top of Bulat, who was also unresponsive due to oxygen deprivation. Both were revived and taken to hospitals for treatment, according to the Red Paws Emergency Relief Team in South Philadelphia

Bulat is reportedly receiving treatment at Temple University Hospital where she's been listed in critical condition with extensive burns. A second woman inside the home was also reportedly injured, but details of her condition were not immediately known

Che is receiving treatment for smoke inhalation at CARES Animal Hospital in Langhorne.

Our hero #firedog Che, still stable (but guarded), is all tucked in for the night at @CARESvet. Sleep tight buddy. pic.twitter.com/cmy07koJaE