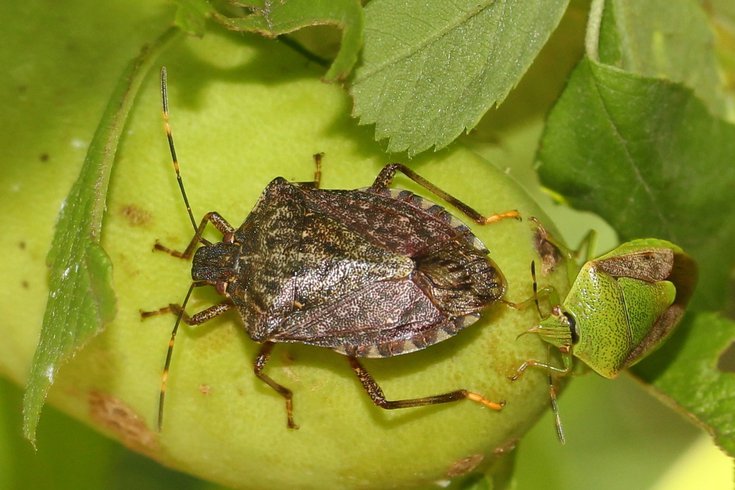 Brown marmolated stink bugs are an invasive pest that has spread across large parts of the United States, but Pennsylvania remains a perennial hotspot. An especially warm summer in 2021 means their numbers may be higher as they seek indoor shelter in the fall.

The hot, muggy summer Pennsylvania experienced could be a harbinger of greater stink bug numbers this fall, the time when the invasive pests usually search for winter dwellings.

There are multiple varieties of stink bug, but the species to watch out for is the brown marmorated stink bug. They thrive under warm summer conditions, sometimes developing two generations when conditions are hot in both the spring and summer.

Adult stink bugs usually emerge in April and May. They then mate and deposit eggs through the end of August. While the eggs hatch into small black and red nymphs, the brown adults search for overwintering locations in September and October.

Greg Krawczyk, a tree fruit entomologist and research professor at Penn State University, told PennLive that this year's summer will likely lead to larger-than-average stink bug populations in some parts of the state. Homes located next to woods or with a high number of ornamental trees are at higher risk.

"Warm summer weather supported their development, so there is a good probability the brown marmorated stink bug numbers this fall will be higher than in the past few years," Krawczyk said.

The time to protect your home and seal up cracks will be over the next four to five weeks, when stink bugs will look for entry points behind baseboards, around window and door trim and around exhaust fans or lights in ceilings, according to Penn State Extension.

Sealing off cracks around windows, doors, siding, utility pipes and behind chimneys is the best way to prevent stink bugs from entering homes. A quality silicone or silicone-latex caulk should do the trick.

Stink bugs are harmless to humans, but they can be a smelly nuisance and can wreak agricultural havoc on a number of fruits and crops such as beans, corn, tomatoes and soybeans.

When stink bugs do get inside, the best method to get rid of them, dead or alive, is to suck them up with a vacuum cleaner. Picking them up or crushing them is not advised, since the bugs emit their foul-smelling pheromones that attract other stink bugs. Over time, a vacuum cleaner may acquire the stench, but it eventually should come out.

The use of insecticides in wall voids and attic areas is not recommended, since the dead stink bugs could end up attracting carpet beetles that feed on them and then turn to woolens, stored dry goods and other natural products kept in a home.

The brown marmorated stink bug was first collected in the United States in Allentown in 1998, though researchers believe they likely arrived a few years earlier in shipping crates from China or Japan. They have few natural predators and have spread far and wide in the U.S. in the years since, reaching other parts of the Northeast, Mid-Atlantic, Midwest, Southeast, Southern California and the Pacific Northwest.

Researchers attempting to manage the spread of brown marmolated stink bugs have explored the use of samurai wasps that lay eggs inside the eggs of stink bugs, since the wasps had already arrived in North America. This form of biological control, currently being researched in some parts of the country, is still in its early stages. Similar types of research have been explored as a method to potentially target spotted lanternfly populations.