Stock up, stock down after the first week of Eagles training camp 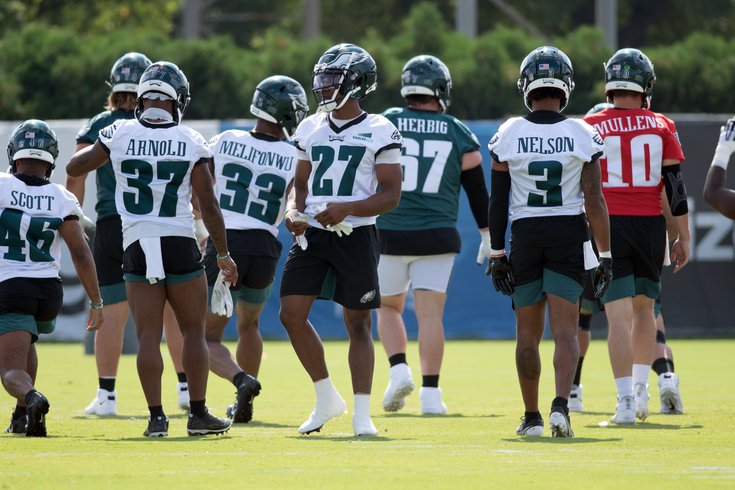 The Philadelphia Eagles are five practices into their 2021 training camp, and have yet to put the pads on, so we are a ways away from a more full evaluation of individual players and the team as a whole. Still, here are five players who are off to good starts, and four who are not.

📈 LT Jordan Mailata: Mailata is having the best training camp of his career, by far. During the offseason, he cut weight to help with his agility, and his power doesn't seem to have suffered in any way. Each day in practice, he has been battling with the likes of Brandon Graham, Josh Sweat, and Derek Barnett, and has mostly gotten the better of them. While we prefaced in the opening paragraph that we're only a week in and there's still room for further evaluation, there's already little question that Mailata should be the team's starting LT in 2021.

📈 RDE Josh Sweat: Sweat had a semi-breakout season in 2020, when he collected six sacks and three forced fumbles in a reserve role. This year, he's pushing Barnett for a starting job, and he has been disruptive every day of camp.

📈 TE Tyree Jackson: You can't miss the 6'7, 249-pound Jackson simply because of his impressive size, but he has also had a few highlight moments so far, notably when he trucked Rashad Smith in the open field on Day 1, and when he made a nice catch and run on a high pass over the middle on Day 5. Assuming the Eagles do indeed trade Zach Ertz before the start of the season, Jackson has shown the most long-term potential among the Eagles' young tight ends vying for a third TE spot.

📈 DT Javon Hargrave: Hargrave missed the entirety of training camp in 2020 and got out to a slow start during the 2020 regular season, but he eventually turned it on down the stretch after the Eagles' season was already in the toilet. This year, Hargrave is healthy, and he looks more like the player the Eagles thought they were getting when they gave him a big contract during the 2020 offseason. He has been quick, powerful, and disruptive along the interior of the defensive line.

📈 CB Zech McPhearson: I have yet to see McPhearson get obviously toasted, but I have noticed him getting hands on footballs and being aggressive with receivers in press coverage. It's been a long time since the Eagles have drafted a long-term answer at outside corner, and McPhearson is off to a solid start in his first camp.

📉 LT Andre Dillard: If you were an alien from a planet that also had football and you were dropped off by a spaceship into Eagles training camp, having no idea about the history of any of these players, you'd be confused why Dillard is playing, at all, with the first-team offense. He has had a couple of days in which he has gotten absolutely wrecked both in 1-on-1's and 11-on-11's, and he has yet to have a truly good day. He's only getting opportunities to win a starting job at LT because he's recent first-round pick, but he is very clearly an inferior player to Mailata.

📉 WR Jalen Reagor: Reagor was a limited participant during the first four practices of camp with "lower body tightness." That is not the start to camp the Eagles were hoping for out of Reagor in Year 2 after a disappointing rookie season.

📉 WR John Hightower: Hightower had a fantastic rookie camp, but he has not made plays so far in Year 2, and he seems to be getting reamed out regularly by the coaching staff for mental errors.

📉 K Jake Elliott: Elliott has only kicked six field goals during camp so far, but he missed two of them, one of which was from 33 yards. He also had a near miss on a 38-yarder. Elliott isn't going anywhere this year. He doesn't have any training camp competition, and it would cost more to cut him than keep him, but he has to be feeling some pressure to get back on track.

📉 The Eagles' conditional first/second round pick from the Colts for Carson Wentz: When the Eagles traded Wentz for a second round pick that could become a first round pick if playing time benchmarks were hit, it seemed like that would be a fun thing to track throughout the season. And... welp... Wentz lasted two days of Colts training camp before needing surgery on his foot, severely jeopardizing his availability for the start of the 2021 season.