For new streets commissioner, it all started on the back of a trash truck

'I think my grandfather would be proud of me," says Donald Carlton, 44 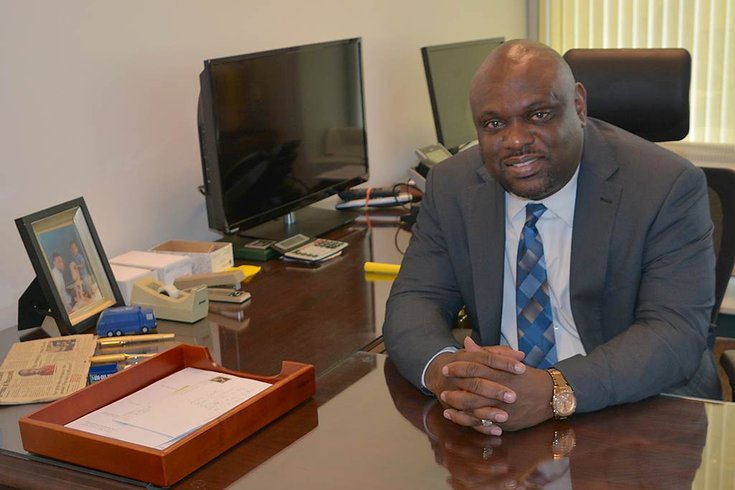 Even when he was on the back of a truck collecting trash, Donald Carlton was imagining a brighter future. He now runs the city's Streets Department.

He’s in a plush corner office now, overlooking Center City Philadelphia, far from the pungent odor of trash, raging blizzards, unbearable heat, large scurrying rodents and the drug dealers who once stopped him at gunpoint.

Yet the rhythm of routine hasn’t left Donald Carlton, nor has his penchant for the streets.

“Don Carlton truly is a Philadelphia success story....He will serve as an inspiration to any resident who dreams of improving his or her life through hard work and determination.” – Philadelphia Mayor Jim Kenney

For years, he would start each morning the same monotonous way, pulling himself up by the rusted metal bar on the back of a city trash truck. Soon after, as the truck wound along its Northwest Philadelphia route, and he braced against the wind on another gun-metal gray wintry morning, his mind would invariably wander someplace else.

Carlton was physically there, holding onto that handle, but his vision took him beyond to those houses he would pass in Manayunk, Roxborough or Mount Airy. To having on-street parking, or being able to send his son to one of those posh private schools. It was a good way to fill the time between steps off to grab another trash can.

It’s one thing to dream about change, another to do it.

Donald Carlton did it.

'I SAW OTHER THINGS DOWN THE ROAD'

He went from being a trash man to the ruler of the streets. In fact, the Strawberry Mansion High graduate is believed to be the first city sanitation worker to become the Philadelphia Streets Commissioner.

“Don Carlton truly is a Philadelphia success story,” Philadelphia Mayor Jim Kenney said. “He started out walking behind a trash truck and now has risen to lead the entire Streets Department. As commissioner, Don will ensure that the department gives residents efficient and effective services. And just as importantly, he will serve as an inspiration to any resident who dreams of improving his or her life through hard work and determination.”

You can almost say Carlton, 44, was destined for the role. His maternal grandfather, Ezzard Carlton, was a longtime sanitation worker who would let young Donald hitch rides around the block. Ezzard had a deep, raspy voice that commanded respect for himself and his vocation.

“Don has been through it all – I mean, through it all. You have managers who will put their gloves on and they don’t just lead from the ivory tower, they get out and do it. That’s Don. He earned all of his promotions." – Clarena Tolson, deputy managing director for Transportation and Infrastructure

The son of teenaged parents, Carlton was raised by his maternal grandparents. He joined them in a three-bedroom, North Philadelphia rowhome of 14 – his grandparents and their 12 children, six boys and six girls. Don was considered No. 13.

“In the neighborhood, they didn’t know I was a grandchild, they thought I was the baby of the family,” Carlton recalled. “We managed to fit 15 in a three-bedroom row home in North Philly. You make do. I remember sleeping in the bed with grandparents and one of my uncles. There was a lot of love in that house.

“Of course there were hard times, and things were tight, but my aunts and uncles made sure I was taken care of," he said. "It was a situation where you had to have tough skin. The good thing about my particular block was almost every home had a strong male role model. You had a lot of single-parent homes in North Philadelphia that didn’t. We still struggled with poverty and my grandfather was very well-respected on the street. I just remember being well-protected.”

He also has vivid memories of Ezzard Carlton wheeling around in his trash truck and beeping his horn. As a child, he would hop in the cab for a ride around the corner, not knowing that one day he would start a career at the very facility on Delaware and Spring Garden where his grandfather once worked.

Graduation from Strawberry Mansion High was followed by enlistment in the Navy. Once discharged, he returned to Philadelphia with the idea of landing a job in the justice system, working with juveniles. He had job offers from SEPTA, the Philadelphia School Board and the city Streets Department. So in 1992, 10 years after Ezzard Carlton passed away, he began following his granddad’s footsteps with aspirations of larger things.

A year later he was having doubts.

“I’m questioning, ‘What was I thinking when I turned down SEPTA and the School Board? I could be working in a warm school or driving a bus.’ As you move up the ranks, a lot of people told me some things are meant for you and sometimes you don’t see it. There’s not a lot you do see on extremely hot days, or in pouring rain. Yeah, I used to second-guess the decision, but obviously I don’t second-guess it now....I consider myself a strong person. You have to stay focused on what you want to do.”

Curiosity fueled him. He would ask field managers what their job entailed. He would inquire about the jobs of route managers. And when those folks went on vacation or leave, Don jumped at the chance to fill in. His willingness to work on an interim basis at almost every level of middle management didn’t go unnoticed.

It helps, of course, when you’ve seen and been through it all.

“One time, one of my crew members dumped a can that had a stash of drugs in it,” Carlton recalled. “About a block away, one car pulled over in front of the truck, another car pulled up behind the truck. They stopped us, pulled out guns and told us, ‘Get out of the truck, you all have my stuff!’

“I can laugh now and I was a driver. It wasn’t too funny then. They made me get out slowly, with hands up. I’ll be honest, I was just hopeful that no one would pull the trigger. That thought did come across my mind. I didn’t even know why I was being pulled out of the truck initially. They went back and sifted through the trash. They found a bundle of whatever the material was they were looking for and said, ‘You all are lucky; we thought you stole our stuff.’ They basically wanted their stash back. Once they got what they needed, they pulled off and left us alone. We called the cops and the manager, and then went back to work.”

And then there's the rats.

“We were working in a section of the city and dumped some cans, and these two large rats were running in the hopper in the back of the truck,” he remembered. “I emptied the trash and was about to hand the cans back to a woman standing at her back door when one of the rats jumped out and ran into her house. She slammed the door shut so hard that the hinges fell off and the other rat ran back into the house. It was funny at first, and then you realize how scary it is ... that it was an issue on that block. These rats were as big as cats. The guy who I was on the back of the truck with that day still talks about it.”

'HE GOT THINGS DONE'

Carlton became a trash truck driver at 26, going from the back of the truck to the front. By 27, he became the youngest person to become a district supervisor, managing 60 people, after stints as a field manager and crew chief. His reports grew to 100 people, then 300, and eventually more than 1,000 as the chief of operations. He showed a great ability to stay calm and communicate when things got tense, coordinating the highway division with the water department, for example, and crossing paths with every other department. It’s not easy, with so many departments heading in different directions, especially on a snow day.

“Donald started as a laborer with the city, but quickly rose to a mid-level management position and had a lot of responsibilities in a pretty significant area of the city,” said Clarena Tolson, the deputy managing director for Transportation and Infrastructure. Tolson, 55, is a Wharton grad who’s been working for the city for 33 years, serving as the second-longest streets commissioner. “I think one of the things I was always impressed with was how willing our Streets Department is with service delivery. Donald was always hard working and exhibited leadership skills, which you don’t often find with people.

“I think my grandfather would be proud of me – but he would make sure to tell me to pay attention and watch everyone around you. I think if he were here, he would give me a big hug. Sitting in the cab driving around the corner with him was a great moment for me.” – Donald Carlton, Philadelphia Streets Commissioner

“At the time, I was working with Carlton Williams (former deputy streets commissioner), and we noticed in Don a high level of leadership skills from his military background. He got things done. He knew how to move people around to implement a plan. That’s part of being purpose-driven the way Don did things. So many folks in sanitation know it’s demanding. You have someone like Don who brings a different perspective.

“Don has been through it all – I mean, through it all. You have managers who will put their gloves on and they don’t just lead from the ivory tower, they get out and do it. That’s Don. He earned all of his promotions. Streets is a tough department, but the folks there know who’s real and genuine, and who knows their business.

"He’s about talking it through and he respects all of those who work for him, and those who work with him. He knows because he’s done it. He can encourage others to become warriors with him.”

In mid-December 2015, Carlton received a call on a Friday afternoon about his latest promotion – to Streets Commissioner. He thought immediately of those draining days behind the truck – and to a man that set him on this path sitting in a cab taking a short ride around a corner.

“I actually get a lot of comments about inspiration and I think that comes from everyone knowing my background,” Carlton said. “A lot of times when you’re walking behind a trash truck, you don’t think about what’s next. I did. It wasn’t always easy. It’s a challenge. It’s still a challenge.

“I think my grandfather would be proud of me – but he would make sure to tell me to pay attention and watch everyone around you. I think if he were here, he would give me a big hug. Sitting in the cab driving around the corner with him was a great moment for me.”