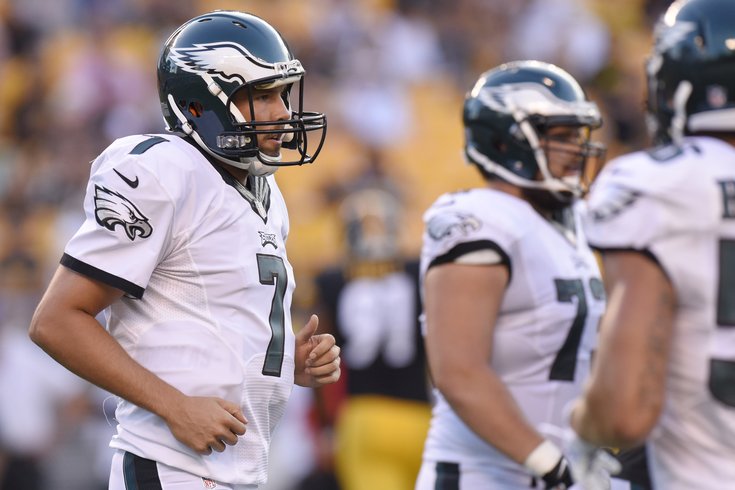 Philadelphia Eagles quarterback Sam Bradford (7) walks to the huddle during the first half.

With their 17-0 win over the Steelers on Thursday night, the Eagles moved to 2-0 this preseason – and are now outscoring opponents 34-9 through their first two games.

As we saw again in Pittsburgh, the strength of this team is largely on one side of the ball: defense.

Jim Schwartz's unit has forced eight turnovers so far this season, plus a ninth added by the special teams on the opening kickoff last week against the Bucs. The Eagles have been so prolific at forcing turnovers, in fact, that the most surprising part of their win over the Steelers was that they failed to record a second-half takeaway.

Still, they finished with four interceptions in the game -- pushing their total to seven for the preseason -- including Nolan Carroll's pick-six in the first quarter, while holding the Steelers to just 207 yards of offense and 2.4 yards per rush.

But for as good as the defense has been, the offense has been just as bad. The Birds are averaging 13.5 points and less than 250 yards of offense per game this preseason, but that's only scratching the surface.

When the Eagles added a late first-half field goal to push their lead to 10-0 over the Steelers, I noticed something interesting about all their scores to that point:

All of the Eagles scores this preseason have come following a turnover by their defense.

And while that may seem like a stretch given the sample size, just look at the length of the Eagles' scoring drives through the first six quarters.

To recap, that's 27 points on 16 plays and just 74 yards. Their average scoring drive to that point (not counting the pick six, for obvious data-skewing reasons) was just 18.5 yards.

Going forward, that's not going to be a sustainable winning formula.

The defense can't be expected to create that many turnovers and continually give the offense such short fields with which to work. And no, I'm not faulting the offense for taking advantage of these situations -- their ability to score in the red zone has been a pleasant surprise. Rather, it's their inability to sustain any momentum and put together an extended drive that's been most troubling.

But given how stagnant the Eagles offense looked over the last three quarters against the Bucs, that alone was a big improvement after a slow start in Pittsburgh.

"We really rebounded and put a nice drive together to score the three points right before the half," Pederson said after the game. "And again, part of that drive, even the drive before that, we were moving and a couple of penalties caused us to stop that drive. But I was pleased with how the offense was able to move the ball there in the second quarter."

It was the first, and only, time that the offense would find the end zone against the Steelers.

"We really didn't [struggle to get going]," Pederson said. "We ended up with 26 plays [in the first half] and we moved the ball. The penalties were the biggest thing. Those were the things that killed us. And any time that those things happen, it makes it look like the offense is struggling. But I thought we put together a good drive -- really, back-to-back drives when you think about the field goal before the half and then the drive to start the third quarter for the touchdown. That was 10 points right there that were really crucial to this game."

In terms of efficiency, the Eagles quarterbacks numbers looked just fine. Sam Bradford was 14-of-19 for 115 yards, but he failed to find the end zone despite playing the entire first half. Furthermore, he averaged just 6.05 yards per attempt and four of his five drives ended with punts, with just six first downs in total. Daniel completed 10 of his 16 attempts, but like Bradford, he struggled to get anything going down the field, totaling just 82 yards (5.12 per attempt).

Hopefully, the eventual return of Jordan Matthews and the addition of Dorial Green-Beckham, who made a surprise appearance against the Steelers, will help them improve in that area. Plus, a bounce-back year from Nelson Agholor wouldn't hurt.

Sure, the offense was intentionally vanilla Thursday night -- these two teams meet again early on this season -- but that's no excuse.

"I think I just wanted to see our communication at the line of scrimmage. I wanted to see our tempo in and out of the huddle. I thought those were both really good tonight and I think it was more about that than it was about coming out and being flashy and all that.

"That being said, you'd like to score points, more than we did tonight."

The defense has been stellar, as anyone who's been watching clearly recognizes. That being said, this still is the preseason, and the Steelers were without their three best offensive players – Ben Roethlisberger, Antonio Brown and Le'Veon Bell – for the second straight week, meaning it was the Eagles first-team going up against Landry Jones and a bunch of other guys you probably aren't too familiar with. And last week against the Bucs, all three interceptions came against quarterbacks not named Jameis Winston.

Those four interceptions in the first half Thursday? Probably not going to happen in Week 3 -- or many other times this season when the competition level rises.

The D is going to be able to win a game or two for this team, but in order to win many, more, the offense is going to have to step its game up. And soon – next week will be the starters' last chance to get this right before the season opener against the Browns.