Handing out 10 awards from the Eagles-Steelers preseason game 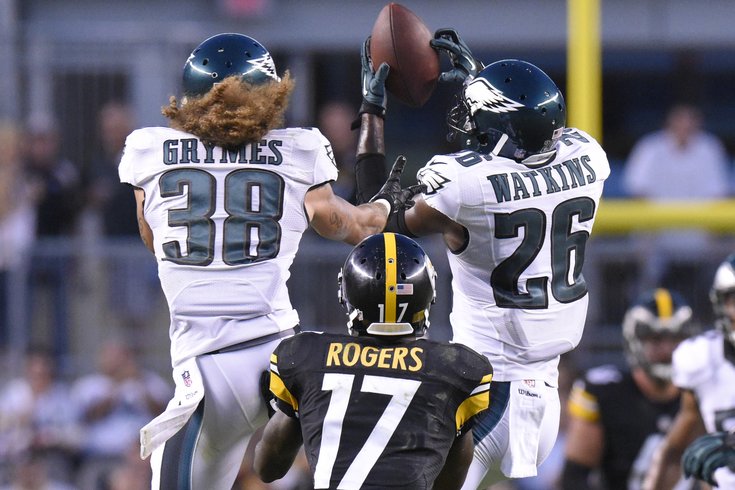 The Philadelphia Eagles' defense was the story of preseason game No. 2 in Pittsburgh Thursday night, when the Birds shut out the Steelers, 17-0. As always, win or lose, we hand out 10 awards:

1) The Robber Award: The Eagles' defense

In the first preseason game against the Buccaneers, the Eagles forced five turnovers. In game two against the Steelers they forced four. As long as the Eagles average 4.5 takeaways per game, they should be OK.

2) The Underrated Award: The Eagles' corners

Do the Eagles have a stud lockdown corner who is going to make the Pro Bowl? No, probably not. But they do have two professional corners, and legitimate starters in Leodis McKelvin and Nolan Carroll, as well as quality depth behind them. Carroll had a great night, as he was targeted (by my count) three times, resulting in a pick six, a pass breakup, and an offensive pass interference call.

On one of the aforementioned turnovers noted above, Steven Means hit Landry Jones as he was trying to throw, producing a wobbly duck that fell into the waiting arms of Jaylen Watkins. Means is a lock to make the roster.

In the third quarter, with the Steelers backed up against their end zone, Smith got a great get-off at the snap and got around the edge for a sack (that he shared with Means). Smith is beginning to play like a man who knows his job is at stake.

If only he played that way all along.

Shittu had 1.5 sacks, meaning the Pittsburgh press box public address announcer twice had to say, "Sack by Shittu," prompting immature laughter from idiots like me.

6) The Shutout Award: The Eagles' defense

Yes, the Steelers were missing several very good players, but give credit where credit is due -- the Eagles' defense was very, very good. The Birds have the potential to be a Top 10 defense this season.

If you aren't familiar with the yearly "Na Brown Award," it is the title awarded to the Eagles player who comes out of almost nowhere to cause a big stir at camp and raises his expectations unreasonably high in the process. Back in the early Donovan McNabb days, Na Brown was a camp stud who got a lot of hype but ultimately failed to live up to his heightened expectations.

It has become somewhat of a negative thing to earn, because more often than not, the hype eventually turns the player into a disappointment. But for now, it means one thing... that the player is doing good things and getting noticed.

This year the unanimous Na Brown Award winner should be WR Paul Turner, who had another good showing, snagging a one-handed circus catch.

Over the first two games, the Eagles have committed 23 penalties, which is obviously far too many. Many of them have been of the "mental mistake" variety. They're going to have to clean that up a bit.

Donnie Jones is such an accurate punter that he was able to drill Caleb Sturgis in the head with a punt during pregame warmups. Sturgis suffered a concussion and was sidelined for the night. Did Cody Parkey pay him off?

After the game, Parkey said he didn't pay off Jones to maim Sturgis.