Philadelphia ranks among the most racially segregated metro regions in the United States, according to research conducted by the University of Minnesota.
The Philadelphia metro region has the second-highest number of Racially Concentrated Areas of Affluence (RCAA) — areas where the white population totals at least 90 percent and the median income level is four times greater than the federal poverty rate. Only Boston, with 77 RCAAs, has more than the 70 in Philadelphia.
Philadelphia also has 86 census tracts labeled as Racially Concentrated Areas of Poverty (RCAP) — locations where the population is less than 50 percent white and more than 40 percent are living under the poverty line. That marks the fourth-highest total among the 15 cities examined by the researchers.
The research is part of a working study examining the self-segregation of whites. Edward G. Goetz, director of the University of Minnesota's Center for Urban and Regional Affairs, is leading the research, which examined 15 metro areas, but excluded New York.
Goetz said public policy has focused on the concentration of poverty and residential segregation, shielding the opposite end of the spectrum — rich, white populations — from scrutiny.
"Some people argue that when whites and affluent people segregate themselves, it can erode empathy, and it can inhibit the pursuit of region-wide remedies," Goetz told The Atlantic. "It can inhibit a sense of shared destiny within a metropolitan area." 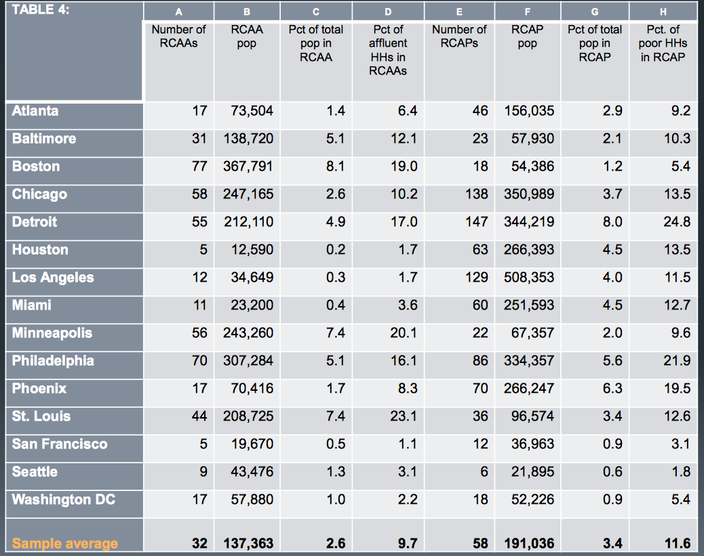 This table shows the percentage of metro populations living in census tracts designated as Racially Concentrated Areas of Affluence and Racially Concentrated Areas of Poverty.
About 5.1 percent of the Philadelphia metro population lives within an RCAA, the fourth-highest figure among the cities studied. Another 5.6 percent lives within a RCAP, the third-highest percentage.
Nearly 30 percent of the Philadelphia metro's white population lives within a census tract where the population is at least 90 percent white. That marked the fifth-highest percentage, falling behind St. Louis, Boston, Detroit and Minneapolis.
The population among Philadelphia's RCAPs is 52.4 percent black, 32.2 percent Hispanic, 10.8 percent white and 2.6 percent Asian.