Aunt gets subpoena in probe of S.J. toddler's unexplained death 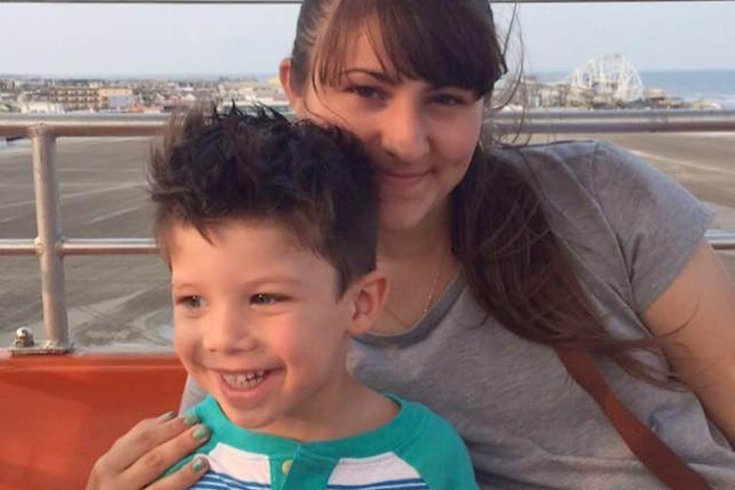 Brendan Creato with his aunt, Sarah Jessica Creato, at the Jersey Shore.

A grand jury subpoena was served on Sarah Jessica Creato, seeking her testimony in the death of her nephew and godson, Brendan Creato.

The subpoena directed the 20-year-old, who had made a movie trailer school project about the death of a young boy over a year ago – played by her nephew – to testify this past Monday.

But Brennan had said last week during an interview with PhillyVoice that his client was speaking to a prosecutor on Monday, though he did not share at that time that a subpoena had been issued to compel her to speak.

The Camden County Prosecutor’s Office, which is investigating the death, did not respond to multiple requests for comment on Wednesday.

The body of three-year-old Brendan Creato was discovered about 9 a.m. on Oct. 13 in woods near the Cooper River. The boy lived with his father, David "DJ" Creato, 22, in an apartment about a half a mile away from the park where his body was found, a place he had visited with his father.

Brendan was with his grandmother, Lisa Creato, at her home on Monday, brought him to the apartment at around 8:30 p.m., according to lawyer Richard J. Fuschino Jr., lawyer for DJ Creato. The lawyer said his client last saw his son at around 10 p.m.

The toddler was gone from the apartment when he awoke, shortly before 6 a.m. the next morning, according to Fuschino. His client called his mother, then 911, setting off the search that ended three hours later when the child’s body was discovered. 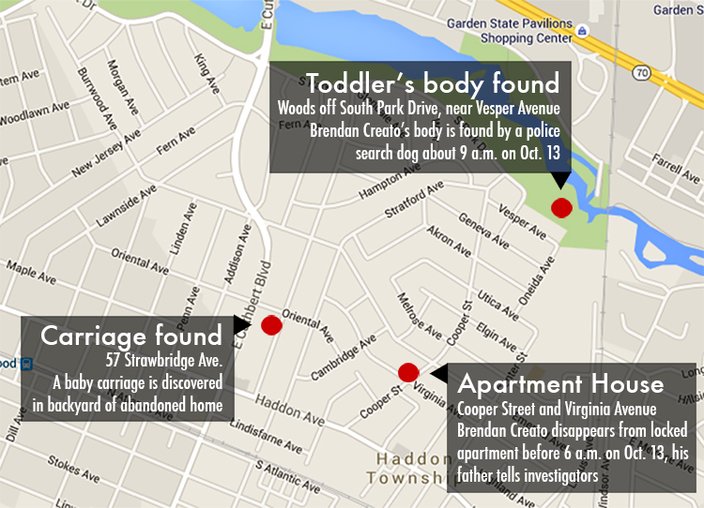 Meanwhile, police have repeatedly reviewed surveillance video taken from a Haddon Avenue business with a view of Cooper Street, the business owner, who asked not to be identified, has confirmed to PhillyVoice.

It is unclear exactly what police were looking for on the surveillance footage, said the business owner. He said police viewed video perhaps four times and had him sign a release for it more than once.

Also, one of two people who have said they saw a baby carriage in the vicinity of the park at around 7 a.m. on Oct. 13 has dropped from sight.

Efforts by PhillyVoice to talk with Mark Hoover have been unsuccessful. He has moved his primary vehicle from his residence in Haddon Township, has not responded to notes from a reporter seeking comment, and has stopped going to a business where he once was a dependable regular.

While having lunch at the Pour House, a Haddon Avenue bar and restaurant, on the Tuesday the toddler’s body was found, Hoover had volunteered to a PhillyVoice reporter that he had seen a blanket-draped carriage near the park, close to the woods where the body was discovered.

Hoover had said then that a white man of at least 60 pushed the carriage. He was wearing tan pants and a yellow sweater, and had on glasses, according to Hoover.

Hoover said he thought it was early for a walk on a cool morning – about 50 degrees – with a baby.

But what most struck him most was the man had tried to stare him down, Hoover said that day.

Hoover said he had told police about the incident, but word of that incident had evidently not been forwarded to investigators for the county, who learned of Hoover from PhillyVoice.

County detectives were particularly interested in hearing Hoover’s account because a second person, a woman, had also told investigators a similar story of a man with a carriage, though with a less-detailed description of the man.

A niece of Hoover’s who had spoken up for her uncle when his account about the carriage was questioned on social media, has since taken down her Facebook page and has also told friends her uncle is not allowed to talk about the matter.

An NBC10 account that aired on Oct. 19 suggested the toddler’s body was “definitely placed there” in the park’s woods and that he had not walked into the woods on his own.

Adding to the intrigue, an abandoned baby carriage was found later in the month of October in the backyard of a vacant home on Strawbridge Avenue, in the Westmont neighborhood of the township where the Creatos live.

The prosecutor’s office has not responded to previous requests for comment on the abandoned carriage, but neighbors on Strawbridge Avenue said the police were canvassing the neighborhood looking for more information about it.

“It would not shock me if it is related, if the carriage is an actual piece of evidence. There is a possibility it’s a coincidence, or maybe the person just doesn’t want to be involved now,” Richard J. Fuschino, the lawyer for DJ Creato, said of Hoover dropping out of sight.

Fuschino said he had not previously heard about the surveillance tape, but he also said reviewing such footage is expected of police.

'I WOULD MUZZLE HER'

It is unclear if Sarah Jessica Creato did testify on Monday, or if she was instead allowed to provide a sworn statement to the Camden County Prosecutor’s office, an option that is open at the discretion of the prosecutor.

It is also not clear if the grand jury that issued the subpoena is an indicting grand jury – able to bring charges – or simply an investigative grand jury.

A. Charles Peruto Jr., a Philadelphia defense lawyer who is not involved in the case, said indicting grand juries are the favored tool of prosecutors in New Jersey, though either type might be used to review an unexplained death, such as the Creato case.

Peruto said prosecutors use subpoenas and grand juries to “lock a witness into a story.”

It was unknown if Sarah Jessica Creato was called simply as a witness or if she was told she was a potential target of the grand jury investigation.

DJ Creato has not been subpoenaed, according to Fuschino.

The lawyer also said he did not know if his client’s 17-year-old girlfriend, Julia “Julie” Spensky, had been called by the grand jury.

The college student from New York had spent the weekend at the apartment with Brendan and DJ Creato, he said.

Spensky had referred to herself and DJ Creato as “possible suspects” in “a homicide” on a Tumblr account since removed from online.

Fuschino last week had dismissed her comments, including an assertion that DJ Creato had been told he could not leave New Jersey, as “complete falsehoods."

Her lawyer, Joseph Sorrentino, did not respond to requests for comment.

Brennan last week said of her postings, “very little is as dangerous as a teen with access to social media. If she were my client, I would muzzle her.”

Brennan and Fuschino both said last week that the movie trailer made by Sarah Jessica Creato, with Brendan playing the role of a boy who dies, appeared to be just an unfortunate coincidence.

Since removed from YouTube, those who had seen it while it was still posted universally described the trailer as “creepy.”

The Camden prosecutor’s Homicide Section and Haddon Township police have investigated the mysterious death for over a month. Authorities have yet to say if the toddler’s death is considered natural or a homicide.

The prosecutor has only said that there was no sign of a break-in at the apartment and that the child was not sexually molested.

A gross anatomical examination during autopsy did not immediately reveal a cause of death. Three medical examiners were a part of that autopsy and a follow-up, second-look review.

A toxicology report recently came back clean as well.