Dr. Pete Speth, a controversial ex-medical examiner, penned a curious letter to the editor about case 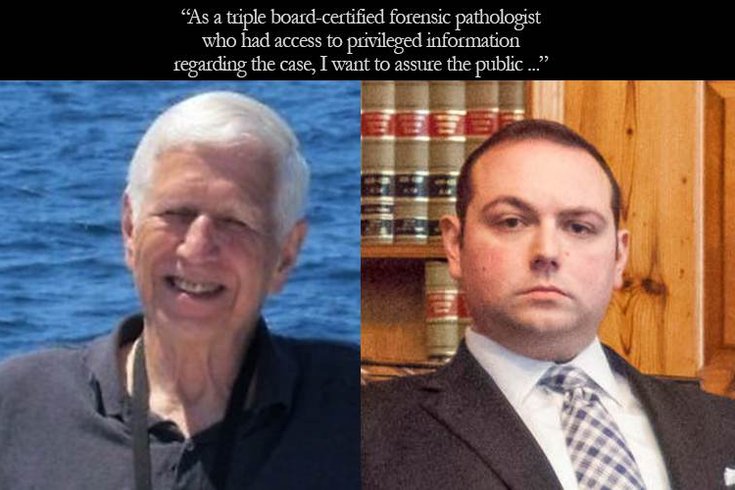 A letter written by forensic pathologist Dr. Pete Speth, left, which says he had "access to privileged information" in the Brendan Creato case, has drawn interest from attorney Richard J. Fuschino Jr., right, who represents the father of the dead boy.

A letter written by a controversial former medical examiner stating he has “had access to privileged information” regarding the unresolved death of Brendan Creato has a lawyer for the child’s father questioning how Dr. Pete Speth came to know those details.

The lawyer also wonders why Speth’s letter, published Nov. 9 in the South Jersey Times, alludes to the possibility of the “apprehension of a suspect” in a case that has yet to be publicly declared a homicide by the Camden County Prosecutor’s Office.

“It may be inappropriate if he was called in for a review,” said Richard J. Fuschino Jr., lawyer for David “DJ” Creato.

DJ Creato is the father of the child found dead in the woods of Cooper River Park on the morning of Oct. 13 – a death still without a public explanation.

The toddler was last seen alive the night before at an apartment that he shared with his dad, about a half a mile away.

“I think it is really curious after essentially calling out (Camden County Medical Examiner Gerald “Buck”) Feigin in a previous story that Speth is now, on his own, writing a letter saying ‘stand down,’” and trust the system to play out, said Fuschino.

He also questioned Speth’s motivation for making public comments in a case the prosecutor’s office has officially tried to keep a lid on.

A spokesman for county prosecutor Mary E. Colalillo did not respond to requests for comment about Speth's letter.

“Is he trying to curry favor?” asked Fuschino of Speth. “Does he have some reason to change his tune or aid the prosecutor in seeking a suspect?

“I really have to wonder what is so privileged, private and secret that they can share that information with him, but not my client or the public,” he added.

Noting the Camden County prosecutor has had nearly nothing to say about the case – to the public or to his client – Fuschino added, “I have real concerns and reservations about dangling someone out there, saying ‘rely on me vouching for them.’”

“The letter speaks about possibly apprehending a suspect. If he knows there is a suspect, it would be inappropriate if he knew that, especially with his history,” said Fuschino.

Dr. Zhongxe Hua, a pathologist and doctorate in biochemistry who is a professor and consulting pathologist in New York, said consulting other medical colleagues to discuss pathology issues raised at autopsy is fairly standard.

“Reaching out and consulting outside pathologists is good and a reasonable approach, especially when the inside people have limited experience,” said Hua. “Further, a new set of eyes always can be more helpful. “

But Hua, who has worked as an medical examiner in northern New Jersey, said wider discussions that include scene notes from law enforcement and specialized reports present a whole other issue when it comes to the ethics and guidelines of sharing information.

Those disclosures would require a “proper foundation” for a discussion with someone not directly involved in an investigation, such as Speth, in Hua’s opinion.

Speth said the source of the privileged information discussed the investigation with him, however, that person trusts Speth not to disclose the information, or to identify him.

'ON THE SCIENCE, NOTHING ELSE'

Speth’s letter, which was published the same day a secret grand jury was set to take testimony in the case, reads:

“The public has questioned the professionalism and thoroughness of the autopsy and associated investigation into the sad death of Brendan Creato, the 3-year-old boy whose body was found last month in Cooper River Park in Haddon Township.”

“There has also been criticism of a lack of information coming from official sources and the time it is taking to find answers.

“As a triple board-certified forensic pathologist who had access to privileged information regarding the case, I want to assure the public of the following:

“The autopsy and postmortem examinations performed by Dr. Gerald Feigin and additional consultants were thorough.

“Very often, autopsies do not provide answers as to the cause of death even when performed with the highest degree of proficiency — such cases rely on the associated scene investigation and other elements of the investigation.

“From what I know, all of this has been conducted in an exemplary fashion. There are often facts about an investigation that cannot and should not be shared with the public while the investigation is being conducted.

“Premature release of such information could interfere with the ultimate apprehension of a suspect if, in fact, a case turns out to be something other than a natural or accidental death.

“The public must be aware of this, respect it, and be patient.

“I realize that it is very difficult to sit and wait for answers in an untimely and tragic death such as this, but I hope that my comments may allay some of the mistrust that currently exists.”

His comments in the letter appear to contradict an Oct. 22 interview he gave to PhillyVoice.

In that story,  he questioned Feigin’s work ethic, noting the medical examiner had told him autopsies should not take “more than 20 minutes.”

Speth also said then, “I don’t think for one moment you should think anything is natural” about Creato’s disappearance and death.

Speth defended the letter to the editor and his motivation during an interview Thursday.

But he declined to discuss details about what he’d been told, who had told him, and exactly what he was told.

“I was contacted by someone to pick my brain about certain aspects,” of the investigation, said Speth, who currently works as a forensic consultant, primarily in legal cases.

He declined to say if the person who reached out to him is officially part of the investigation, which has involved the Camden County Prosecutor's Office, Haddon Township Police, the county medical examiner, the state medical examiner, and a third medical examiner whose name and position has not been disclosed.

He also declined to discuss the context of why he was asked, or who asked him.

Speth said he was asked for opinions “on the science, nothing else.”

He said his assurances to the public that the investigation was being handled correctly were not, per se, about Feigin, but of the overall forensics review, “plus the totality of the investigation,” including input from two additional medical examiners.

He said he did not mean to imply there is a suspect or that any particular cause of death had been identified.