There's a catch: It's not a cheesesteak 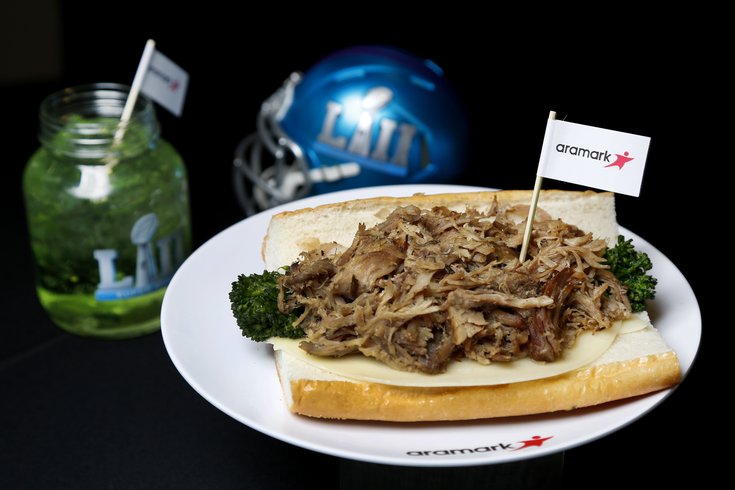 Aramark plans to roll out a South Philly roast pork sandwich as part of its concession lineup at Super Bowl LII.

Attention, outside world: Philly has more to offer than its cheesesteaks.

Just ask Aramark, which plans to roll out a version of a popular South Philadelphia sandwich as part of its recently announced concession lineup for Super Bowl LII in Minneapolis on Feb. 4.

But fans planning to see the Eagles face the New England Patriots at U.S. Bank Stadium will not have the option of dining on an authentic Philly cheesesteak there.

Instead, those wanting a Philly fix will have to get it from a South Philly Roast Pork Sandwich, which some will argue is our city's actual signature bite.

"We wanted to go beyond the obvious choices," Aramark spokesperson David Freireich told the site.

Along with a Minnesota-heavy food lineup, Aramark chose one sandwich each with roots in Philly and New England to "provide a little hometown flavor" for Eagles and Patriots fans.

For the Patriots, Aramark will have a version of a clam roll consisting of kettle chip-crusted clams, tartar sauce and lettuce on a griddled roll.

Not only that, but the food service giant also plans to introduce specialty cocktails made to pair with each sandwich.

There's "The Wicked Red" for New England – a concoction of cranberry juice, rum and blueberry.

And for the Eagles, they'll have something called "Midnight Green Punch." That, Aramark said, will be a tasty mix of sour apple, lemon-lime soda and vodka.

Along with the stadium's general, Minnesota-centric concessions menu, several items from the Minnesota State Fair will be for sale, including smoked turkey legs, pork chops on a stick and cookie dough cones.