Are you suddenly interested in the Supreme Court? You're not alone

Every once in a while, Americans rediscover the Supreme Court.

With the resignation of Justice Anthony Kennedy and the nomination of Judge Brett Kavanaugh, the country is now in such a moment. When someone is nominated to the court, or when the court hands down a decision that politicians and the media tell Americans will have a major impact on their lives, citizens perk up. Suddenly, the court is big news.

That does not mean that Americans normally pay much attention to the federal judiciary and the court that stands at its apex.

In other words, Americans have a vague feeling that the court is important even though they know very little about it.

But when events turn their attention to it, and particularly when the country is seriously divided about the direction in which the nation is going, the electorate rediscovers the third branch.

There have been a few such moments in American history.

In 1858, presidential hopeful Abraham Lincoln held a series of debates with Stephen Douglas, who was contesting Lincoln’s effort to become the Republican Party nominee.

The centerpiece of their debates was a discussion of Dred Scott v. Sanford, the 1857 decision in which the Supreme Court held that black Americans could not become citizens. Lincoln’s pledge that he would not honor the decision was crucial to his nomination.

After the Supreme Court decided Brown v. Board of Education in 1964, the South’s massive resistance to integrated schools was accompanied by a fervent “Save America – Impeach Earl Warren” movement. And, of course, the Court’s 1973 decision in Roe v. Wade has remained a flashpoint in American politics to this day.

COURTS AS CHECK ON POLITICS

What is different today, at the moment that a Supreme Court nomination has riveted the attention of citizens?

One difference can be traced to the presidency of Donald Trump. The country now has a president who has become a lightning rod for both supporters and opponents, and a Republican-dominated Congress that overwhelmingly supports or declines to interfere with his actions.

Given that situation, the president’s opponents have turned to the federal judiciary as their last hope for keeping him in check, bringing case after case in areas such as immigration, the environment and transgender rights.

While the 2018 elections could change the political makeup of Congress, much of what the president has done comes from his ability to exercise unilateral executive power.

So the country is likely to see Trump’s opponents relying on the check of the federal judiciary and particularly the Supreme Court for some years to come. 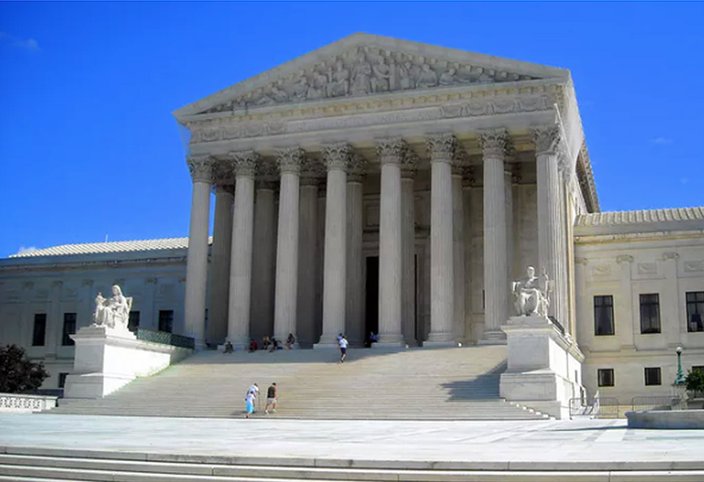 Another difference from earlier controversies about the court is that while the public may dislike, and react angrily to, specific decisions of the court, it has rarely questioned the legitimacy of the institution itself.

It may call for Congress to overturn decisions of the court; it may lambaste particular justices.

But the current controversy over the court takes place at a time when the public is being exhorted by right-wing media, lawmakers and advocates, as well as the president himself to distrust the federal judiciary. President Trump has characterized it as no more than a collection of partisan actors deciding cases on the basis of their political beliefs rather than the law.

“Courts seem to be so political, and it would be so great if our justice system — if they would be able to read a statement and do what’s right,” the president said in 2017, when it appeared that a federal appeals court would strike down one of his immigration policies.

That same year he tweeted, “The courts are slow and political.” And in 2018, after a federal district court judge temporarily blocked the administration from ending the Deferred Action for Childhood Arrivals (DACA) policy, the president tweeted, “It just shows everyone how broken and unfair our Court System is.”

A 2018 Pew survey found that only 35 percent of the public have a favorable view of the federal government. Only 58 percent thought that “democracy is working well.” A 2011 poll found that almost a quarter of American millennials considered democracy to be a bad system. According to a 2016 survey by two Harvard professors, Roberto Stefan Foa and Yascha Mounk, a mere 30 percent of Americans born in the 1980s considered it “essential” to live in a democracy, as opposed to 75 percent of Americans born in the 1930s.

The trend against belief in democracy is worldwide, and began before Trump became president. What is important, however, is the way the trend has been exacerbated by current rhetoric and its potential to undermine belief in the legitimacy of the Supreme Court.

Back in 1992, Justice Kennedy joined Justices Sandra Day O’Connor and David Souter in an abortion rights case. “The Court’s power,” they wrote, “lies … in its legitimacy, a product of substance and perception that shows itself in the people’s acceptance of the Judiciary as fit to determine what the Nation’s law means, and to declare what it demands.”

President Trump’s attacks on the judiciary and on its long tradition of independence can, however, erode this “substance and perception.”

It has frequently been noted that Americans are a religious people. In fact, it can be argued that for many, the Constitution has long been viewed as a secular version of the Bible, and the Supreme Court as the high priests who uniquely understand it. Constitutionalism is, in a way, part of the American religion.

Or so it has been.

Alexander Hamilton referred to the federal judiciary as “the least dangerous” branch of government, having “no influence over either the sword or the purse.” Enforcement of the court’s decisions, Hamilton wrote, “must ultimately depend upon the aid of the executive arm.”

If the chief executive continues to undermine the judiciary in the public eye, or even goes so far as to refuse to honor any of its decisions, the electorate’s willingness to abide by the rule of law and follow court rulings may suffer.

Or perhaps the electorate will simply revert to ignoring the court. The result, in either case, would not be good for American democracy.