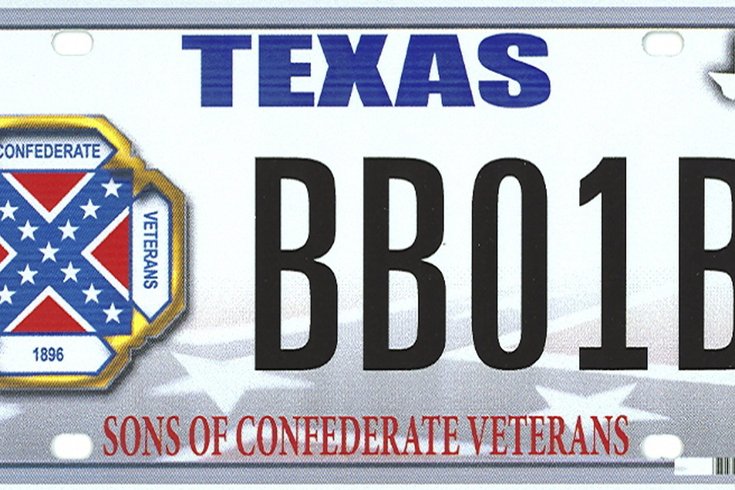 The design of a proposed "Sons of the Confederacy" Texas state license plate is shown in this handout illustration provided by the Texas Department of Motor Vehicles.

The U.S. Supreme Court on Thursday ruled that Texas did not violate free speech rights when it rejected a proposed specialty vehicle license plate displaying the Confederate flag, to some an emblem of Southern pride and to others a symbol of racism.

The 5-4 ruling will give states that issue specialty license plates wide latitude to decide which ones to approve. The court's four liberals were joined in the decision by conservative Clarence Thomas.

The court found that Texas did not infringe on the U.S. Constitution’s First Amendment free speech guarantee when it turned away the application by the Sons of Confederate Veterans. The group says it aims to preserve the "history and legacy" of soldiers who fought for the pro-slavery Confederacy in the U.S. Civil War.

"Free speech is a fundamental right to which all Americans are entitled, and today's ruling upholds Texas's specialty license plate program and confirms that citizens cannot compel the government to speak, just as the government cannot compel citizens to speak," Texas Attorney General Ken Paxton said in a statement.

States can generate revenue by allowing outside groups to propose specialty license plates that people then pay a fee to put on their vehicle.

"I hate that we were turned down," said Gary Bray, commander of the Texas division of the Sons of Confederate Veterans.

"We deserve the rights like anyone else to honor our veterans," added Bray, who said his group likely will submit a revised design.

The state declined in 2010 to approve the plate with the Confederate flag. The flag in question, a blue cross inlaid with white stars over a red background, was carried by Confederate troops in the Civil War.

The court, in an opinion by Justice Stephen Breyer, said the state's action did not touch upon free speech rights because messages on state-issued plates are government speech, not private speech.

When a message is government speech, officials have more leeway to determine what messages they want to approve without violating the U.S. Constitution's First Amendment free speech guarantee.

Breyer said that license plates are "essentially, government IDs." Messages conveyed on plates can be interpreted as government-endorsed because "each specialty license plate design is formally approved by and stamped with the imprimatur of Texas."

During the oral argument in the case in March, a major concern for some justices was that if the state has no say over what messages to allow, it would pave the way for other potentially offensive messages such as images of Nazi swastikas or statements promoting the Islamist militant group al Qaeda.

Breyer said in the ruling that Texas can offer plates that say "Fight Terrorism" but "need not issue plates promoting al Qaeda."

In a separate free speech ruling on Thursday, the court sided with a church in Arizona that was prevented from posting signs advertising its religious services.

(Additional reporting by Jim Forsyth in San Antonio; Editing by Will Dunham)