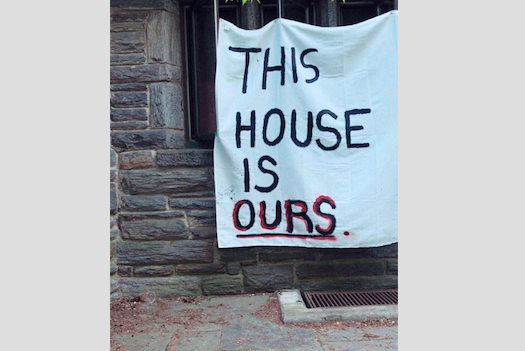 Student protesters at Swarthmore College hung this banner outside the Phi Psi fraternity house. Phi Psi and the school's other fraternity, Delta Upsilon, announced they would disband. The move follows days of student demonstrations after the leak of internal Phi Psi documents detailing sexual assaults and racist and misogynistic behavior at both fraternities.

Swarthmore College's two fraternities will disband following the release of leaked documents containing explicit content, including the suggestion that one fraternity had a "rape attic" and details of members' jokes about minority groups, women, and sexual assault.

Phi Psi and Delta Upsilon made separate announcements on Facebook late Tuesday night. Leading up to the decisions to disband, student activists — under the name Coalition to End Fraternity Violence — held four-days of sit-in demonstrations at the fraternity houses, protests that had garnered national attention.

Last week, campus publications Voices and The Phoenix published minutes believed to be from 2013 and 2014 meetings at Phi Psi that the publications said had been anonymously distributed. The documents, which were redacted by Voices and The Phoenix to conceal students' identities, suggest the Phi Psi members had participated in sexual assaults and made racist, homophobic, sexist and other offensive comments. The meeting minutes also referred to a "rape tunnel" and "rape attic" inside the Delta Upsilon house.

On Facebook on Tuesday, Delta Upsilon posted its decision to disband "in the interest of the Swarthmore community."

"We hope that our former house will provide a space that is inclusive, safe, and promotes healing," the group posted.

Phi Psi posted a similar statement to its page, saying it would disband "to create a campus where these issues are eradicated completely" and "promote institutional healing."

On Saturday in a letter to the campus community,  Swarthmore President Valerie Smith announced an external investigation of the fraternities was underway and that Phi Psi and Delta Upsilon had been suspended until further notice.