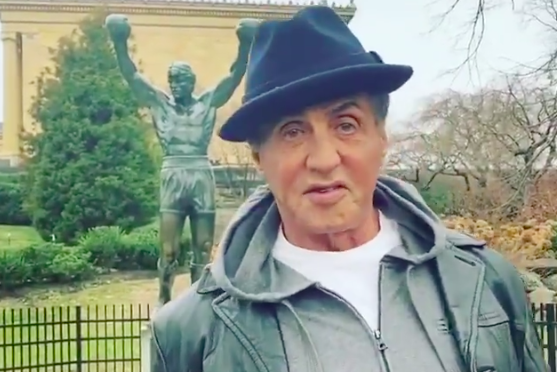 Sylvester Stallone made a surprise appearance at the "Rocky" statue in Philadelphia on Dec. 16, 2019 while visiting the city to film a commercial. The legendary actor teased a big announcement about next steps for the movie franchise.

On an otherwise uneventful Monday morning in Philadelphia, one of the city's most celebrated stars made an impromptu appearance on the Benjamin Franklin Parkway.

Sylvester Stallone casually sidled up to the Rocky statue of his own likeness to deliver a hint at what might be coming next for the blockbuster franchise.

Back in Philadelphia right now on this 33° freezing morning. We are doing something that is going to be VERY special and you’ll be seeing it soon, so hang in there and go for it!!! #KeepPunching pic.twitter.com/xokvSaYVFx

Stallone scored massive success with each his last two "Creed" films featuring Michael B. Jordan. The projects reinvigorated the beloved narrative and proved its themes are timeless for audiences across generations.

In the past, Stallone has said he's developing a TV series that would serve as a prequel to the "Rocky" movies. He has also indicated he would like to film another movie that would take place after the events of 2018's "Creed II."

PhillyChitChat blogger and photographer HughE Dillon tweeted that Stallone was on the set of commercial that included several "mini Rocky's."

Ohhh breaking news #GuessWhosBackInTown Sylvester Stallone is filming @philamuseum today . Everyone is dressed as mini Rocky’s. Sly did a video on Instagram that he’s filming there today.

Stallone has revisited the A. Thomas Schomberg statue — erected in 1982 — several times in recent years. It's unclear what kind of commercial he was shooting on Monday, but fans of the "Rocky" franchise have reason to be excited that big news could be coming about the project's future direction.