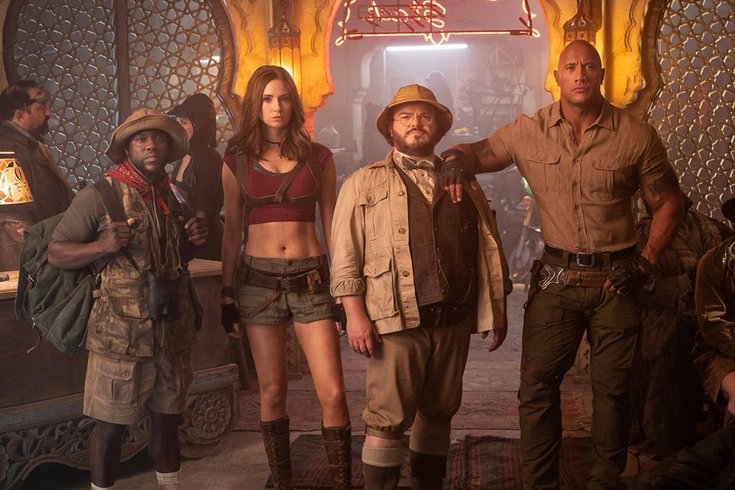 'Jumanji: Next Level,' starring Kevin Hart, Dwayne 'The Rock' Johnson, Karen Gillan, and Jack Black, is expected to make over $60 million this weekend at the box office, earning the No. 1 position.

The Kevin Hart and Dwayne "The Rock" Johnson sequel, "Jumanji: The Next Level" will top the box office this weekend with a solid $60.1 million, according to Box Office Mojo.

The film is expected to earn a worldwide total of $196 million by Sunday. The film beat out Disney’s “Frozen II” from the top spot, which made $19.2 million this weekend with $366 million in total gross earnings. “Knives Out,” with Chris Evans and Daniel Craig, was No. 3 with $9.25 million and a total gross of over $78 million.

This sequel, which opened this weekend, is miles ahead other theatrical releases, including  "Richard Jewell." The film that was directed by Clint Eastwood peaked at the No. 4 position with  $5 million in domestic earnings. “Black Christmas,” a remake of the 1974 horror film about a group of sorority sisters that fight a killer on campus, opened at No. 5. The cult classic remake only made $4.42 million at the box office this weekend.

The Philadelphia native was recently honored on Tuesday, when he dipped his hands and feet in cement at the legendary TCL Chinese Theater in Hollywood. Co-star Johnson was in attendance at the ceremony and delivered a speech.

Hart talked about his friendship with co-star Johnson on Jimmy Kimmel on Wednesday.  “Our relationship has sky-rocketed," he said. "It’s unbelievable the amount of fun we have. He and I got a nice yin and yang thing going."