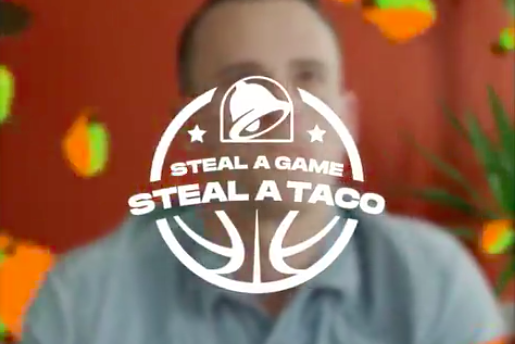 Taco Bell is giving away free Doritos Tacos Locos on June 18, 2019. The promotion is connected to the NBA Finals, which finished last week the Toronto Raptors winning their first championship over the Golden State Warriors.

It's Taco Tuesday — and you don't have to pay for it this week.

In an ironic twist, you can get free Taco Bell this afternoon thanks to a game the Golden State Warriors won on June 3.

The promotion was centered around whether the Warriors, who lost the NBA Finals to the Toronto Raptors last week, could "steal a game" up at Scotiabank Arena in Canada.

Golden State did end up winning Game Two, so despite losing the overall series 4-2, you still get your free Doritos Locos Tacos today, June 18.

Taco Bell shared a reminder this afternoon on Twitter. You can pick up your taco in-store any time from 2-6 p.m. If you use the app or order online, you can get them at any time.

The Warriors stole game two of the NBA Finals! So head to #TacoBell tomorrow from 2-6PM for your free Doritos® Locos Tacos or order online or on the app and pick it up any time, all day.

Maybe you got sick and tired of the Warriors owning the NBA, or maybe you don't care about basketball at all, but today you can thank Stephen Curry and Klay Thompson for winning you some tacos.