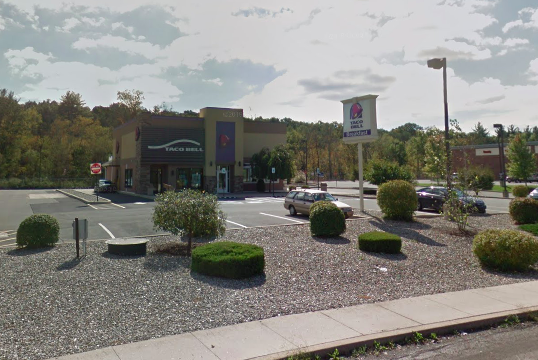 A Bushkill, Pennsylvania man was hospitalized after ingesting what might have been small pieces of a razor at this Taco Bell in East Stroudsburg, state police said. The fast food chain said the incident is under investigation.

A Bushkill man was hospitalized last week after ingesting what he believes were small, sharp metal objects in the food he purchased at a Taco Bell in Monroe County.

Pennsylvania State Police said the 47-year-old man went to the emergency room at Lehigh Valley Hospital-Pocono last Wednesday after eating some of the food containing metal shards, according to Lehigh Valley Live.

Authorities said the incident occurred at a restaurant located at 5124 Milford Road in Middle Smithfield Township in East Stroudsburg.

The man's condition following his trip to the emergency room was not revealed by police.

In a statement provided to Lehigh Valley Live, Taco Bell said it is working with authorities to investigate the issue at its franchise location.

“We take this very seriously," the company said Tuesday. "The franchisee who owns and operates this location is working with local authorities on their investigation, and will take swift and appropriate action once it concludes.”