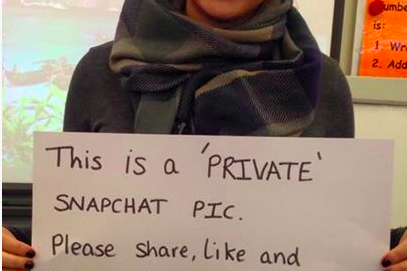 A teacher gives her students a lesson on Internet privacy.

One British teacher gave her students — and the Internet — a lesson in online privacy.

Sammy Roocroft, a teacher at Markland Hill primary school in Heaton, U.K., took a screenshot of a Snapchat photo and then shared it on her Facebook page on Jan. 26.

In the photo, Roocroft is holding a sign that reads: "This is a 'private' Snapchat pic. Please share, like and comment where you are. Help me show my primary class how private this pic really is!"

As of Thursday morning, the photo had almost 22,650 likes, 28,471 shares and more than 30,000 comments. Folks said in comments they were looking at the post all over the world — from Lima, Peru, to Cincinnati, Ohio, to Trondheim, Norway.

Roocroft told Buzzfeed her photo had been manipulated by others and some folks had some less-than-nice things to say.

"I’ve had my pictures manipulated so they look obscene, others where they’ve changed the writing so I’m swearing, messages from people saying I’m a paedophile… I just ignore them."

Roocroft said she decided to conduct the classroom experiment as part of the U.K.'s Internet Safety Week. She picked Snapchat because it is one of the social media platforms used by her students.

"We’d had an incident where a child had screen shot a Snapchat from another — they hadn’t done anything nasty, but it still upset them," she said. "I was expecting a couple of hundred shares. I wasn’t expecting anything like this."