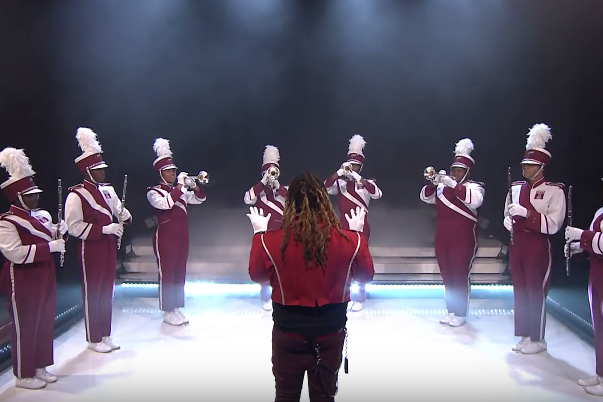 While the Eagles performance on Sunday was certainly upsetting for many Philly fans, "The Tonight Show starring Jimmy Fallon" gave Philadelphians at least one thing to be proud of post-game — a Temple Diamond Marching Band performance.

The marching band made its late-night debut performing with Young Thug and Gunna on a special Sunday night episode of "The Tonight Show" that followed NBC's "Sunday Night Football."

The performance to Young Thug's hit, "Hot," started with a drum major leading two flutists and six trumpet players grouped in a semi-circle. As they bounced to the music, the drum major walks off and Gunna emerges from behind the group to take center stage before the musicians part into parallel lines to greet Young Thug.

The band posted a photo of the eight student musicians with the two rappers to their Instagram account. "TUDMB members with Young Thug, Gunna, and Wheezy after the show taping. Catch it tonight!!"

TUDMB members with Young Thug, Gunna, and Wheezy after the show taping. Catch it tonight!!

The marching band later tweeted, "Had a great day at the Tonight Show! We ran into several @TUKleinCollege alums working on set and behind the cameras."

Had a great day at the Tonight Show! We ran into several @TUKleincollege alums working on set and behind the cameras! #owlsareeverywhere

This isn't the marching band's first time in the spotlight. The band was seen in "Wolf of Wall Street," and in the 2014 remake of "Annie."

Watch the performance below.