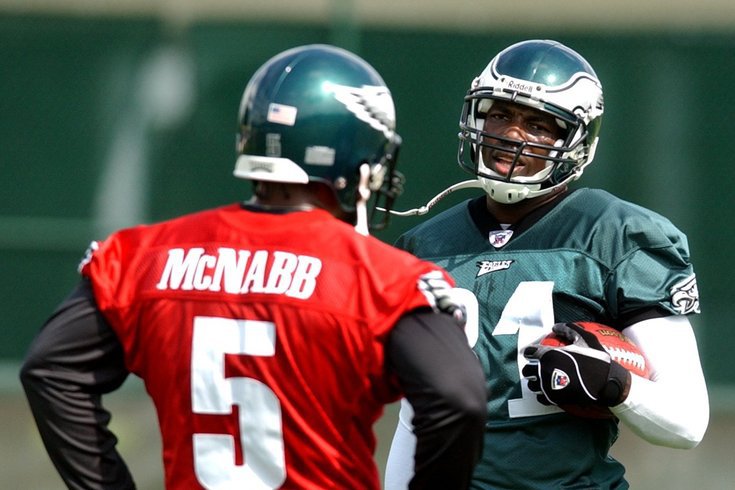 The never-ending beef between Hall of Fame wide receiver Terrell Owens and former Eagles quarterback Donovan McNabb took an unexpected turn on Wednesday, with a fresh accusation from Owens that McNabb got drunk the night before Super Bowl XXXIX in early 2005.

The two former stars have been sniping at each other for years, each claiming not to care what the other thinks while simultaneously taking the bait to talk about one another.

Owens' latest revelation, if true, would be a bombshell and a serious stain on McNabb's reputation.

The remarks were made during a much-hyped appearance on Master Tesfatsion's "Untold Stories" web series, where athletes join the host for a conversation over a game of pool. McNabb appeared on the show back in January, when he repeated his belief that Owens "broke up" the Eagles when they were at the peak of their 2000's run.

The episode with Owens includes spliced clips from the McNabb episode to serve as a refresher.


The accusation about drinking is connected to the long-running claim — disputed by McNabb — that he threw up in the huddle during the Eagles' 24-21 loss to the New England Patriots. Former teammate Lito Sheppard said McNabb did throw up, calling it "subtle," while SportsRadio 94WIP host and former fullback Jon Ritchie once agreed, "It looked that way."

Owens said others saw McNabb out the night before the Super Bowl — he didn't name anyone — and they allegedly saw McNabb drinking, which might explain the vomit.

Since his retirement from the NFL, McNabb has twice been arrested for driving under the influence of alcohol. He served 18 days in jail in Arizona for his second DUI offense in 2015 and was allowed to complete the remainder of his sentence under house arrest.

If Owens' claim is true, it begs the question — why didn't he bring it up for more than 15 years? In the past, Owens has merely insinuated that McNabb's conditioning was poor, without any mention of alcohol.

“I’m not the one who got tired in the Super Bowl," Owens said in 2010 after McNabb was benched during a two-minute drill, when he played for Washington.

Considering how long this feud has been going on, it's hard to take Owens too seriously here unless an eyewitness could confirm that McNabb was drinking before the biggest game of his life, one he had just barely failed to reach in the three previous seasons.

And if somebody had seen McNabb out drinking, why would it never have come to light? If he allegedly puked during the game, wouldn't that be a relevant piece of information to share at some point?

Owens had a fantastic Super Bowl, catching nine passes for 122 yards in the loss. He had rushed back from a broken leg and a torn ligament in his ankle that kept him out of the previous two playoff games.

What happened later — Owens' contract dispute, TV antics and subsequent suspension and release from Philly — are all too well-known by Eagles fans.

Whether or not McNabb addresses Owens' latest charge remains to be seen.

Owens deflected the question of whether the two men will ever reconcile their friendship.

"I've heard him say he's moved on. Then he puts up the deuces," Owens said. "Bro, at the end of the day, he don't make me, man. Like I said, I'm in the Hall of Fame for what I've done and what I've accomplished. I appreciate the opportunity to have played with him."

Asked whether McNabb should be in the Hall of Fame — No. 5 thinks he does — Owens said he doesn't care one way or the other.

"At the end of the day, I'm worried about me," Owens said. "I could care less about that."