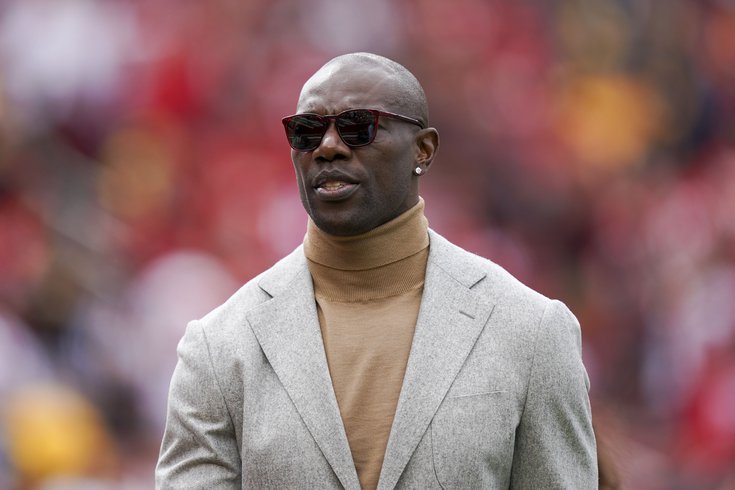 Hall of Fame receiver Terrell Owens has launched a new wine label named for the jersey number he wore during his 16-year NFL career.

Former Eagles wide receiver Terrell Owens is now in the alcohol business, as the Pro Football Hall of Famer has launched his own wine label called Eighty-One.

The name of Owens' cabernet sauvignon can be traced to his playing days, when he famously wore No. 81 during his 16-year NFL career.

The cabernet sauvignon was harvested in vineyards located in Paso Robles, California and aged for 18 months with a combination of both European and American Oak.

The wine is described as "ripe black cherry and cinnamon stick aromas, leading to a palate of plum preserves, dark chocolate and spicy toasted oak."

In an interview on 93.3 WMMR "The Preston & Steve Show" on Wednesday morning, the 47-year-old Owens said that he started "developing his own palette for different wines and tastes" after retiring from football, saying he was not much of a wine drinker during his playing days.

Owens also said that it has been a "very interesting experience" developing his own wine, but admitted that he's far from a vino expert.

"I'm not a sommelier yet, but the descriptions of wine like big and bold fit me pretty well," Owens said to co-hosts Preston Elliot and Steve Morrison of the Philly classic rock station's weekday morning show.

Owens' wine, which features his initials on the front label, can be preordered on his website 81vino.com. Shipments will start next week.

Every Day is Game Day
Eighty-One wine from Terrell Owens is now available at https://t.co/tMbbrP4aOC pic.twitter.com/m2ccBVNG1Q

The domain name for Owens' wine website has a special significance, too, as it is a tribute to the late Kobe Bryant.

Bryant once famously scored 81 points in a game for the Los Angeles Lakers in 2006. The future Basketball Hall of Famer also earned the nickname "Vino" during the latter stages of his professional career to signify that he, like wine, gets better with age.

Owens told Elliot and Morrison that he and Bryant were good friends up until the latter's tragic death last January, and Owens felt that this was a way that he could pay homage to the former NBA superstar.

A standard bottle of Owens' wine will cost $39, while a bottle with his autograph will go for $135. Hopefully it's as good of a signature as Owens once famously inscribed on a football with a Sharpie marker after scoring a touchdown during a 2002 game with the San Francisco 49ers.