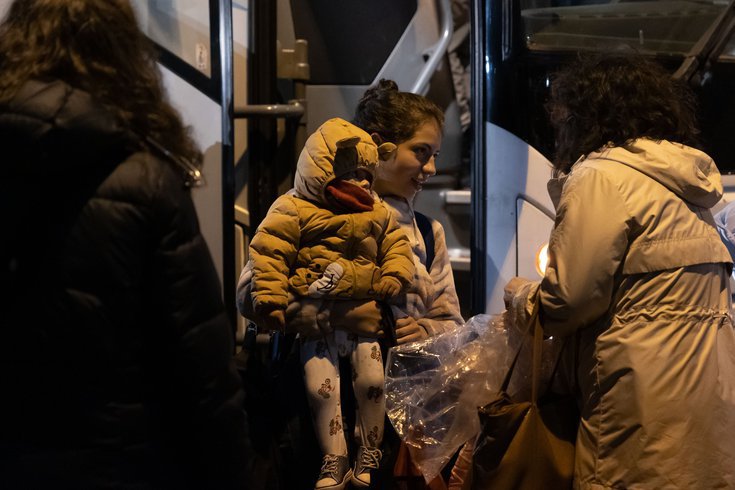 Four buses transporting more than 200 migrants have arrived in Philadelphia from Del Rio, Texas, each unannounced. City immigration officials have decried the 'totally unnecessary' lack of communication from that state's leaders. Above, a woman and a child exit a bus from Texas at 30th Street Station on Nov. 16.

For immigration advocates, November 2022 has been a rough month.

Since Nov. 16, Philadelphia has seen the arrival of four buses with a total of more than 200 migrants from Del Rio, Texas, each unannounced by Texas officials.The latest were two buses that got to 30th Street Station the day after Thanksgiving. The people aboard the buses have arrived seeking second destinations, family members they were separated from at the southern border and medical attention — a 10-year-old girl suffering from dehydration and a fever was even taken to the ER.

Through it all, the city's offices of immigration affairs and emergency managements have coordinated with nonprofits to develop a system to accommodate the influx, which they expect to continue as Texas Gov. Greg Abbott ramps up his efforts to bus migrants from the border to sanctuary cities.

"A bunch of us haven't slept well in many days," Amy Eusebio, director of the Office of Immigrant Affairs, said last week after the second bus arrived. "Because of the whole, like, ahhh is it coming? When's (the bus) coming? And then the early mornings at 30th Street and at the welcome center. But at the end of the day, these are human beings who are just seeking safety, seeking to be with families."

Before the first bus of 28 migrants even arrived at 30th Street Station on Nov. 16, Abbott had sent roughly 300 other buses carrying immigrants from Texas to other Democrat-led sanctuary cities throughout the United States. Along with Arizona Gov. Doug Ducey and Florida Gov. Ron DeSantis, Abbott has transported an estimated 13,000 migrants from southern border towns to New York City, Washington, D.C., and other liberal strongholds. The governors, all Republicans, have employed this "strategy" to draw attention to what they call "reckless open border policies."

Immigration officials on the ground see it much differently.

"It's really complicated and clearly very political," Eusebio said. "I think there's an element there where they're wanting to stick it to us, to the cities that are committed to being welcoming cities. ... It's intentional chaos creation (and) totally unnecessary."

Less than a week after the Nov. 16 bus pulled into 30th Street Station, Texas officials sent a second bus with an even larger group of people to Philadelphia. For most of the 46 men, women and children who arrived on Nov. 21, Philly was not their final destination. Eusebio said her team had seen off the "last two gentlemen" seeking homes in other cities at the Greyhound station last Tuesday night, leaving just four migrants who intended to stay in Philadelphia. They are currently residing at the welcome center in North Philly as immigration affairs and its nonprofit partners — including the Aquinas Center, New Sanctuary Movement and Juntos — search for longer-term housing.

We’re working alongside various organizations and the city of Philadelphia to greet a second bus of asylum seekers from Texas. Help us make sure every person who arrives tomorrow knows that Philadelphia is a welcoming city! pic.twitter.com/7j01EIyYYd

Eusebio explained migrants arriving to Philadelphia with no family or friends would typically enter the homeless shelter system. But given the unusual circumstances, her team is leaning on nonprofits to tap the network they usually consult: fellow immigrants. Recent migrants are primed to understand the help required and cultural sensitivities, areas where Eusebio said other hosts have struggled.

"That's actually very common with many immigrant communities," she said. "People who have been here and settled might open up their home to someone who's more recently arrived, so they can kind of get their bearings for a couple of months while they're trying to figure out their long-term plan."

The migrants arriving in Philadelphia typically do not have adequate winter clothing, sometimes arriving in shorts and flip-flops. The Office of Emergency Management has greeted the buses with warm blankets to stave off the winter chill, but nonprofit partners have also been collecting new coats, scarves and socks for distribution. Dr. Cheryl Bettigole, the health commissioner, has been on the scene of at least two arrivals to offer medical support.

After a few trial runs, Eusebio and her team and its partners have developed something of a system. Through relationships cultivated with "people on the ground related to the busing operation," city officials can typically obtain 36 hours notice of a bus en route to Philadelphia. At that point, the departments of immigration affairs and emergency management spring into action with their nonprofit partners. Representatives from each group are stationed at 30th Street Station when the buses arrive, with warm drinks and donuts for the people on board.

In some cases, local relatives have been waiting there, too, to take travelers home. But for everyone else, they climb aboard a SEPTA bus, commissioned through the city's emergency care plan, to the welcome center. Once there, immigrants undergo an initial assessment. Officials register each individual and record their travel plans and needs. For those moving on to another location, bus tickets are offered. For those staying, rooms at the welcome center are prepared. Both groups have access to showers, meals and a legal orientation to inform the recent migrants of their rights.

"I think our plan has proven very solid," Eusebio said. "Not just from a logistics standpoint, but also in the human touch. It's been really heartwarming for me as a daughter of immigrants to hear other immigrants express, like, 'You all have been the nicest people to us along our entire journey.' People have been saying things like, 'This is the best I've slept in months,' 'Having Colombian food here makes me feel like I'm with family.'"

Still, the problems migrants face are complex, and very much ongoing when they arrive in Philadelphia. According to Eusebio, in at least two cases women on the buses have sought to reunite with their husbands, from whom they were separated at the border, only to discover their spouses were deported. Others have lost people forever along the way.

"I think this a real exposure of the failures of American immigration policy, that there isn't another pathway for people to be able to make their claims," Eusebio said. "So many of the folks we've interacted with, there are so many stories of death that they have witnessed. ... It's really sad and heartbreaking, people are literally having to risk their lives in order for the slimmest prospect of a better opportunity."

Immigration officials are "absolutely anticipating" more buses, and prepared to accept them at any moment. The city is raising money for migrants through a welcome fund, which received about $30,000 in its first few days of solicitation. The nonprofit partners have also assembled a Walmart wish list that includes clothing, soap, food and backpacks. These items will go directly to new migrants.

With the expectation more buses of migrants will arrive in Philadelphia, those on the ground with new migrants hope the attention can shift to the travelers and away from the politicians.

"I'm really tired of talking about Gov. Abbott," Eusebio said. "The way this has all been framed centers him and his concern as a border community. But that really de-centers the clearly hundreds and thousands of human beings who are assessing their home countries as not safe, and not places where they can raise their families.

"The human piece has been missing from the conversation."