The project is based on a similar program in Seattle, where residents stay in one-room dwellings and receive social services until they are back on their feet 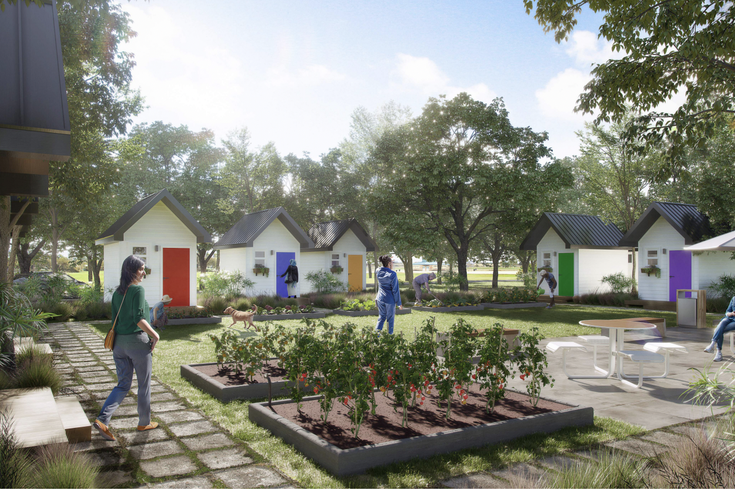 Philadelphia is preparing to build its first tiny house community, which will be used to house up to 30 individuals transitioning from homelessness to permanent housing. Sanctuary Village could begin housing tenants as early as summer 2023, and is located in the Holmesburg section of the city.

Philadelphia is preparing to unveil the first tiny house village in the Northeast. The living community is designed to transition homeless people into permanent housing by providing shelter and a mailing address to help them obtain employment and other social services to get them back on their feet.

Sanctuary Village, which will be located on a city-owned plot of land in Holmesburg, will be the first of its kind on the East Coast, according to Cathy Farrell, board president of the nonprofit. The tiny house village is modeled on a similar venture in Seattle, which utilizes short-term housing for those transitioning out of homelessness and into a more stable environment.

In late 2020, the city sought out nonprofit proposals for building a tiny house village. The project was part of an agreement that closed a months-long homeless encampment on Benjamin Franklin Parkway earlier that year. After Farrell read about Seattle's tiny house village program's success in providing transitional housing to the city's homeless population, she and the other members of the nonprofit sent in a proposal to the city and were later approved to develop their own project.

"I really like the concept of people coming together in community," said Farrell. "(Residents) will be mutually supporting each other through the process of getting back on their feet and living independently again after a long time."

Though things have yet to be finalized, Sanctuary Village could house between 12 and 30 people in short-term increments beginning as early as next summer. Each tiny home will be 96 square feet, with a 4-foot porch around the front of the building. The one-room home will include a window in the front of the house, and will be furnished with a bed, desk, chair and a college-sized refrigerator.

Though each building will be equipped with its own heating and air conditioning system, plumbing will be focused in a centralized building that will include kitchen space, bathrooms and a laundry area. Residents will be able to decorate their own tiny house, by painting the walls and arranging furniture.

Each resident will be assigned a case manager, and volunteers will assist in providing job training, resume workshops and help filling out paperwork to help residents obtain health care and other social services. Since Sanctuary Village is only looking to house a max of 30 residents at once, Farrell said that the nonprofit will help place tenants into permanent housing at the end of their stay.

"The drawback is that it's not permanent," said Farrell. "It's like a lifeline — come in, we'll help you get your life back on track, help you heal and when you're ready, you can move into permanent housing."

Residents will be referred to the tiny house village through referrals from the Office of Homelessness Services and Welcome Church, who work with homeless communities throughout Philadelphia. There is no application process, and vacancies will be filled as tenants move on to permanent housing.

Sanctuary Village is one of two proposed tiny house villages that could be arriving in Philadelphia over the next few years.

Mosaic Development Partners, a North Philly-based real estate company, has been developing a slightly different short-term housing model that would eliminate homelessness for 26 residents, with priority made for those older than 62 or living with a disability. The timing of the project — which would be located in Mill Creek — remains unclear, though it will be funded through COVID-19 relief funds.

Though Farrell said that Philly's tiny house village "shamelessly copies" Seattle's program, it differs in a few ways. For one, Philly's zoning laws require the homes be structurally sound and more deeply attached to the ground than those in Seattle. For another, the homes need to be built to withstand Philly winters and inclement weather, including strong winds during hurricane season.

In 2015, Seattle’s Low Income Housing Institute began building its tiny house villages as a response to the homelessness crisis and as a replacement for tent encampments, allowing people to transition to permanent housing, find steady employment and connect with social services.

There are 17 villages in Seattle operated by LIHI. The construction of each tiny house costs approximately $4,000, and includes electricity and heat. Each community shares laundry, kitchen and bathroom facilities.

The houses are meant to be transition properties, helping homeless people move into permanent housing as they find employment. According to LIHI, about 65% of people stay in their houses for less than six months. 29% of people stay up to two years, and just 6% of people stay for more than two years.

In 2020, Seattle City Council passed a measure to expand tiny house villages in the city, constructing up to 40 communities in vacant lots. Though it has been lauded by organizers and Washington Gov. Jay Inslee as an effective strategy to reduce homelessness and help people transition into housing, Washington’s tiny house villages have not come without their challenges, either.

Complaints about hoarding and illegal dumping around a village earlier this year were seemingly met with silence by Sharon Lee, executive director of LIHI. Community members around the village complained that the villages look nice for a few months after they’re erected, but then fall into disrepair.

At Rosie's Place, a tiny house village in Seattle's University District that can hold up to 70 residents, residents help support the clean-up effort by sweeping and keeping the area around their homes and community clean and free of loose papers, trash and used syringes.

"Here, we're a family," Ejay Henry, operating manager at Rosie's Place, told KUOW. "I have my office looking like this (filled with colorful artwork) for a reason, because I want them to feel like, 'Homie, come in here; we're a family, we take care of each other, you have security, you're safe here.' That's how my village is run."

Though Rosie's Place has seen some issues since it began housing tenants in 2018, its organizers remain supportive of the concept, particularly as cities around the country face an affordable housing crisis. Though these are not long-term dwellings, officials with the Kings County Regional Homelessness Authority noted that tiny house villages are just one piece of a larger system of hosting options to reduce homelessness.

A tiny home village in Salt Lake City was also approved for 430 total units in October, leasing eight total acres of recovery housing to provide a transition between homelessness and stability.

The Salt Lake City village costs approximately $13.8 million, and is primarily funded by contributions and donations rather than government funds. Construction has yet to start, though officials believe that tiny homes are a worthwhile strategy for reducing homelessness due to the importance of having a permanent address in order to obtain a bank account, permanent housing, employment or some forms of medical assistance.