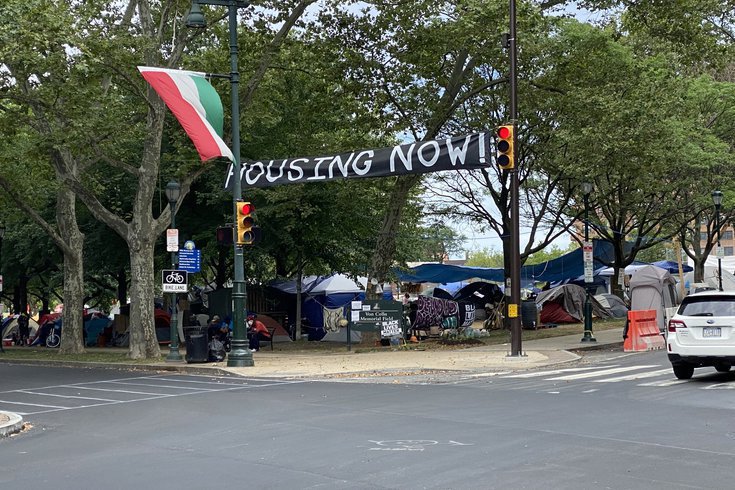 The James Talib Dean homeless encampment on Philadelphia's Benjamin Franklin Parkway will clear by the end of the week as part of a deal reached with the city and the Philadelphia Housing Authority. The encampment formed in June with a demand that the city take substantive action to provide permanent housing to homeless residents.

Organizers of the homeless encampment on Philadelphia's Benjamin Franklin Parkway have agreed to a deal with city officials to clear the protest camp by the end of the week, ending a five-month demonstration that demanded action to address chronic homelessness.

The announcement caps negotiations that were renewed in the wake of a September deadline that passed without a resolution, leaving open the uneasy prospect of a forced eviction at the site near 22nd and the Parkway. The city remained committed to an amicable solution that would avoid police intervention.

Last week, a second protest encampment on Ridge Avenue also disbanded when an agreement was struck to create new pathways to housing, including a home repair training program and 25 permanent housing opportunities through the Philadelphia Housing Authority.

The final agreement with the organizers of the Parkway's James Talib Dean Camp centers on the transfer of a total of 50 city and PHA properties to a land trust established by encampment residents.

Philadelphia Housing Action, the coalition behind the encampments, tentatively announced the framework of the deal late last month, signaling a resolution was close at hand.

City officials spelled out the terms more clearly on Tuesday night, including a promise from camp residents to leave the Parkway by the end of this week.

The transfer of properties will take place in phases spelled out in the agreement:

•Within five days of the resolution of the camp and establishment of the Land Trust, the City will enter into an agreement to provide site control and access, on a temporary basis, to up to 10 properties to the Land Trust.

•Within six months of the resolution of the camp, the City will enter into agreements to transfer up to an additional 40 city-owned properties identified by the Land Trust.

•Of those 40, 25 will be transferred to the City within 45 days by PHA, using properties from closed Rental Assistance Demonstrations (RAD) transactions.

“As with last week’s resolution of the Ridge Avenue camp, this agreement is the result of a lot of hard work by all of those involved, and I thank everyone for their efforts," said Mayor Jim Kenney. "This took a long time, but an amicable resolution was always my goal, and I’m pleased that this has been achieved. I also want to thank the camp leaders and residents for elevating Philadelphia’s affordable housing crisis in the public eye. We have an agreement, but the larger issues remain — particularly amid a global pandemic — and we all need to rededicate ourselves to finding bold solutions."

Camp organizers celebrated the agreement, thanking all those who participated in the protests and city leaders who ultimately responded by finding a solution to move the issue forward.

"The whole point of our protest was to make sure everybody had a house," said Sterling Brown, JTD Camp organizer and local activist with the Black and Brown Workers Cooperative. "While we didn’t get everything we wanted, we did get a commitment for a significant number of housing units for a community land trust from the City and PHA and expanded options for camp residents. We also have gotten assurances that we will have a seat at the table with the City leaders so our voices will be heard and our grievances addressed.”

Jennifer Bennetch, founder of OccupyPHA, said she looks forward to a productive relationship with the city.

"We appreciate the opportunity to move from protest to partner and look forward to implementing lasting change for the houseless community," Bennetch said.

The agreement includes several other commitments from the city:

•The City will move forward with the development of two Tiny House Villages, one with 10-12 self-contained units, the other with communal kitchens and bathrooms to accommodate 10-12 people, by the end of this year.

•The City will make nine bedrooms available for individuals and five bedrooms (one house) for a family under their existing Shared Housing Initiative program.

•The Office of Homeless Services has created 50 new rapid rehousing opportunities under a “Street to Home Rapid Rehousing Pilot Program.” Under this agreement, the City will register 32 of these 50 opportunities for former residents of both camps. Individuals selected under this pilot program will be provided with a security deposit, utility assistance, moving costs, leasing assistance, and up to 24 months of rental assistance for units in the private rental market.

•The City and PHA are committed to continued collaboration with encampment leaders on vacant property, homeless and treatment system reforms, and the expansion of available permanent housing.

"There is still so much work to do," Jeremiah said. "We must all continue to work together until there is housing for everyone PHA remains committed to our mission to open doors to affordable housing, economic opportunity and safe, sustainable communities to benefit Philadelphia residents with low incomes.”

The end of the encampments will finally resolve the persistent concerns shared by neighborhood residents, who complained of compromised public safety, disruption of recreational activities and delays to planned development projects.

A groundbreaking ceremony will take place Wednesday morning at the site of the $48 million Sharswood Ridge Project, a mixed-use development that will include mixed-income housing, a neighborhood grocery store, healthcare services and new retail businesses.

"The residents of these neighborhoods have the right to live in peace and safety, and this agreement helps preserve that right," said City Council President Darrell Clarke. "I’ve been dedicated to the cause of affordable housing for my entire career in City Council, and our efforts will continue energetically across the 5th District and the entire city.”