Study calls for long-term plan to 'transform a toxic landscape' 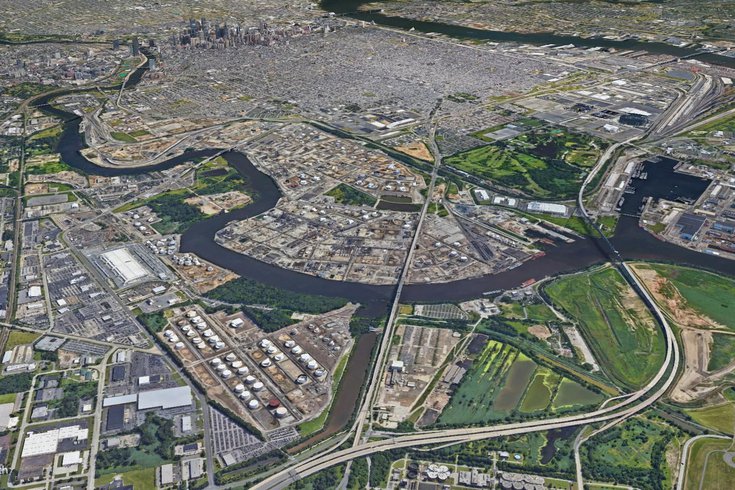 The 1,400 acre site of the former PES refinery in South Philadelphia was acquired earlier this year by Hilco Redevelopment Partners, which aims to build a multi-modal logistics site that will bring 19,000 permanent jobs to the city.

The fiery explosion at the former PES refinery in South Philadelphia in June 2019 created an unusual opportunity to repurpose one of the city's most geographically valuable sites, with sustainability and community benefit as central goals.

The 1,400-acre site, covering both sides of the lower Schuylkill River, was acquired in August by Hilco Redevelopment Partners for $225.5 million.

A new report from Drexel University's Lindy Institute for Urban Innovation and the Clean Air Council examines how the site can be strategically developed to ensure connectivity to Philadelphia, equity for surrounding communities and creative uses of the land that leverage environmental safeguards as public amenities.

“The former PES refinery on the Lower Schuylkill represents the single most important development site in the city," said Harris Steinberg, executive director of the Lindy Institute for Urban Innovation at Drexel University. "Its strategic location between the job-rich hubs of Center City, University City, Philadelphia International Airport and the Philadelphia Navy Yard gives us the opportunity to create the template for an equitable, just and inclusive Philadelphia. Our goal is to jump start a robust public conversation about how Philadelphia can best integrate the site into the city over the next century."

Over the next decade, the construction of a multi-modal logistics park is expected to support more than 13,000 project jobs and deliver $2.3 billion in economic development to the city.

In the long term, the site is projected to create 19,000 full-time, permanent jobs in e-commerce, warehousing, distribution, manufacturing, and rail and marine operations. It is hoped that the site will generate about $3 billion in annual economic impact to the region.

Remediation of the site will include the removal of some 950 miles of existing pipes and 30,000 tons of asbestos, tapping into the local labor force to help transform the husk of a site that has been dedicated to the petrochemical industry for 150 years.

The report, funded by a grant from the William Penn Foundation, was informed by public input surveys and workshops with design professionals to discuss key objectives for civil planning. Community members emphasized toxin remediation, climate adaptation in site planning, and expanded mobility through and around the site.

On the heels of a lengthy public process to select a developer for Penn's Landing on the Delaware River Waterfront, the hope shared in this report is that Hilco, the city and community partners can engage in a similar, transparent partnership that incorporates feedback on the site's redevelopment.

The report's vision for the Lower Schuylkill calls for a series of key moves by the city of Philadelphia in partnership with Hilco:

•Create a street grid and central boulevard across the site to integrate the site into the surrounding city. Over time, the grid can be broken down in scale to allow the site to evolve from logistics and light industrial to one that supports a greater diversity of uses including commercial, institutional, civic, and possibly even residential. Ultimately, a signature gateway bridge would be built at Girard Point as a southern gateway to Philadelphia from the airport.

•Turn the Schuylkill Expressway at Point Breeze into a surface boulevard that eliminates this barrier between the neighborhood and the site and extend Point Breeze Avenue to the river.

•Create new green and open spaces for the adjoining neighborhoods and the city’s park system. Develop green infrastructure on the portions of the site that are in the floodplain.

•Expand public transit connectivity through new hubs of activity (for example, mixed-use centers, park space, or other employment hubs) across the site.

"The Lower Schuylkill holds significant promise for the social, environmental and economic health of Philadelphia," the report concludes. "Stakeholders including Hilco, community and advocacy groups, the Planning Commission and other City departments, elected officials, regulatory agencies and others in the public and private sector need to work together to build upon this initial visioning study to develop a long-term plan to transform a toxic landscape into an integrated, connected and healthy part of a 21st century city."