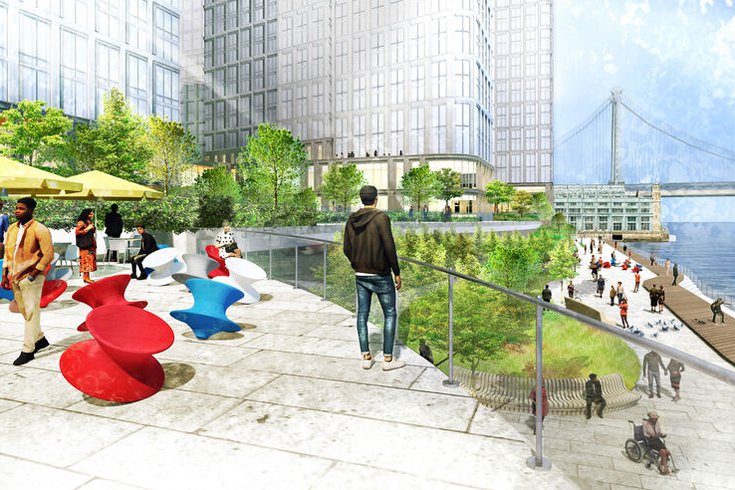 A $2.2 million redevelopment project on the Delaware River Waterfront will be led by the Durst Organization, a New York-based firm that plans to add 12 new towers, retail and hotel space to two sites near Penn's Landing.

When the Delaware River Waterfront Corp. selected a Penn's Landing proposal from the New York-based Durst Organization on Wednesday, the bigger story seemed to be that the Philadelphia 76ers' unpopular proposal to build a new arena was not chosen.

But the Durst Organization will now reimagine Penn's Landing in a substantial way for the first time since Simon Property Group envisioned an entertainment and retail hub with a sky tram to Camden in the early 2000's.

DRWC opted for the Durst Organization's $2.2 billion plan because they believe it best represents their master plan for the central Delaware River, a long-term vision whose central piece is a $225 million park that will cap Interstate-95 and reconnect Front Street to the riverfront between Chestnut and Walnut streets. 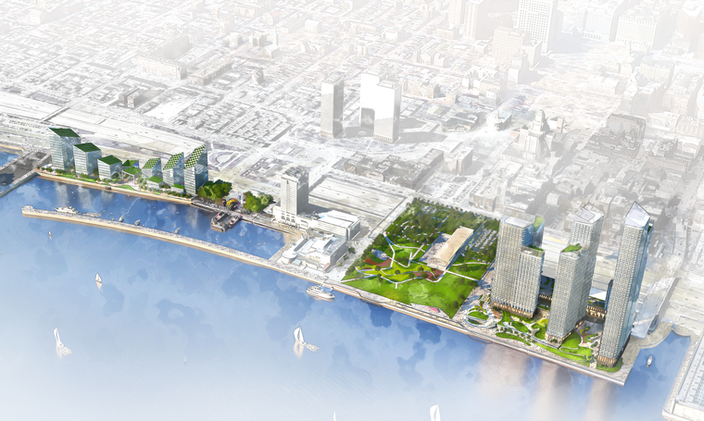 Source/DRWC
"After considering four strong proposals, we came to the conclusion that The Durst Organization offered the best plan to meet the goals and criteria identified through the public engagement process for the Master Plan for the Central Delaware," DRWC board chairman Alan Hoffmann said.


The Market Street site spans 7 1/2 acres from Market Street to Chestnut Street, while the Marina Basin Site covers four acres from Spruce to Lombard streets. Combined, the projects will feature nearly 2,400 apartments, more than 124,000 square feet of retail space and a 225-room hotel.

"We are honored DRWC has selected us for this transformative project that will provide Philadelphians' extraordinary access to the waterfront," said Jonathan Durst, president of The Durst Organization. "We look forward to working with community members, elected officials and stakeholders to finalize a design that fulfills the vision of the Master Plan for the Central Delaware, creates economic opportunity and jobs for all Philadelphians, particularly disadvantaged businesses and people of color, and makes an inviting mixed-use development with retail and recreational amenities that activates the Delaware River waterfront." 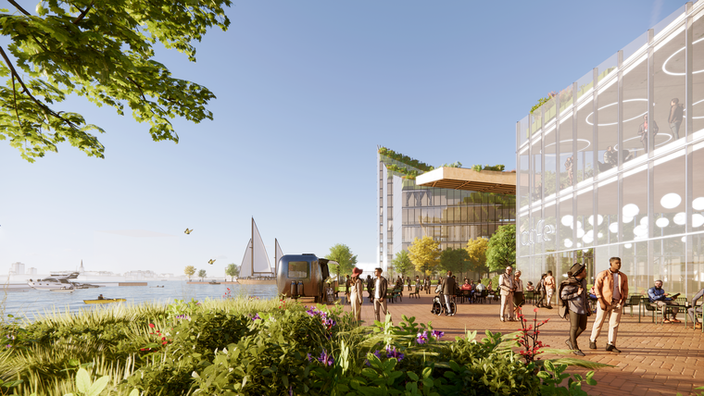 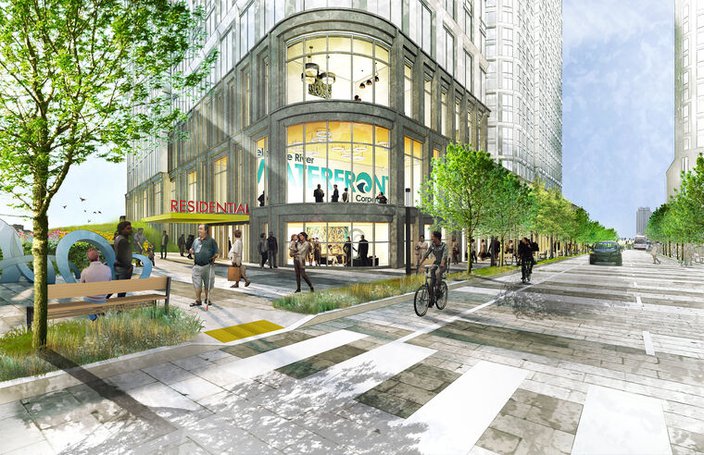 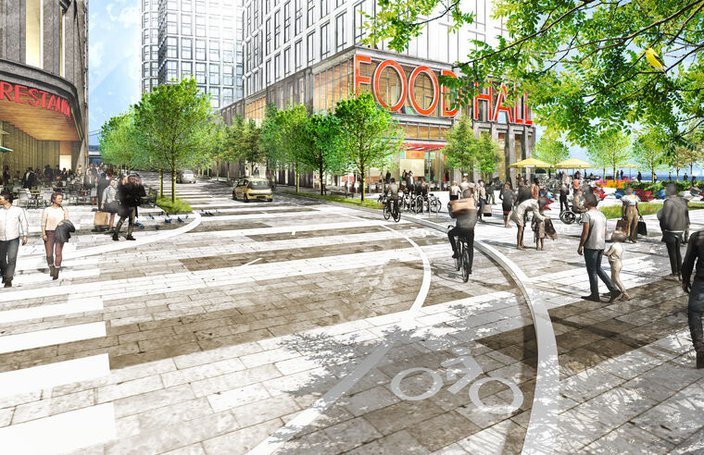 The proposal includes six towers on the Market Street site, complemented by public spaces at Penn's Landing Park and an overlook with views of the waterfront, the river and the Benjamin Franklin Bridge. Clarke Pelli Architects, the designer of the Cira Centre in University City, will lead the design of the Market Street Site.

"The Durst Organization's thoughtful proposal prioritized minority participation and economic impact, without the need for a tax-payer subsidy," Philadelphia Mayor Jim Kenney said. "This is a very large-scale project that will have a great impact on the waterfront for years to come. I look forward to the continued revitalization of Penn's Landing." 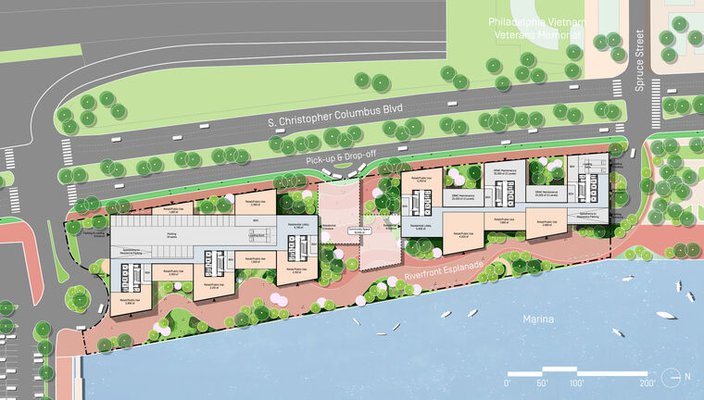 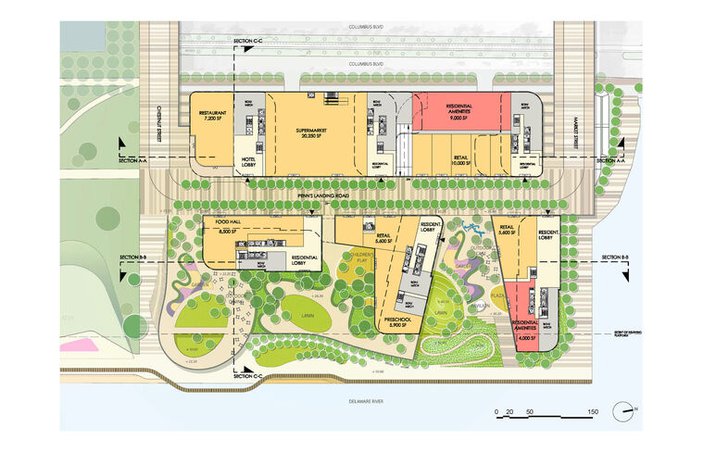 Source/DRWC
In its proposal, the Durst Organization committed to contributing payments to the city's Housing Trust Fund, which enables rehabilitation of existing affordable housing and the construction of homes for lower-income residents in Philadelphia.


The proposal also includes an equity stake of up to 20% of the potential development going to registered Minority Business Enterprise partners, as well commitments to minority and local hiring in the construction workforce. 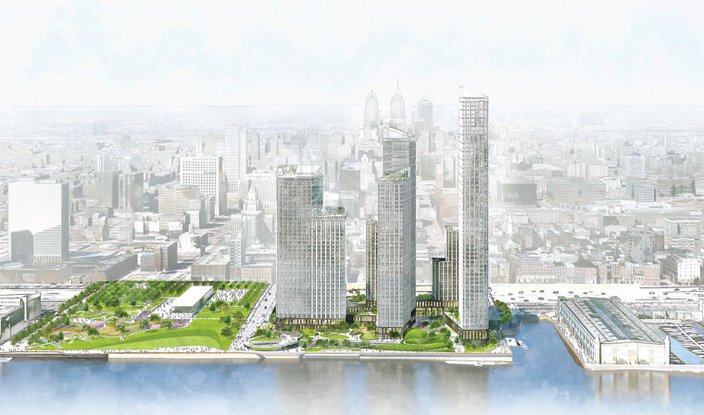 
Earlier this year, the family-owned company finalized the purchase of a 1.6-acre parcel on a site at Vine Street and Columbus Boulevard, which will become another large, mixed-use development. It also owns leases for a set of piers along the Delaware River.

The next step in the Penn's Landing development will involve negotiations with DRWC to enter a lease agreement and continue public engagement for both sites, whose plans will be submitted through the Philadelphia Civic Design Review process.

"We are tremendously excited to be working with the community and DRWC on a plan to realize the potential of the Delaware River waterfront as an asset for nearby neighborhoods and the city as a whole," Durst said. "Our goal is to build off investments in Penn's Landing Park, Race Street Pier and Spruce Street Harbor park to transform the river into a gateway to Philadelphia while increasing economic opportunities for the entire city."