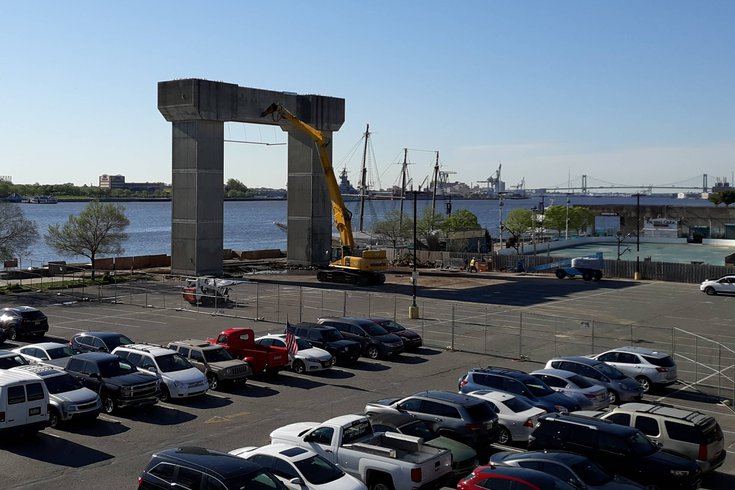 Crews will demolish the arch at Penn's Landing that has stood as a remnant of a failed development project on Philadelphia's Delaware River Waterfront.

The hulking vestige of a doomed development project on the Delaware River waterfront will soon be demolished at Penn's Landing.

Sometimes dubbed Philadelphia's Stonehenge, the arch of a once-planned sky tram to Camden is finally coming down after 18 years as a monument to — well, nothing really.

The plan called for a Cheesecake Factory, a new location for the Please Touch Museum, a carousel and a majestic Skylink Aerial Tramway that would whisk 3,000 people an hour across the river on heated and air-conditioned gondolas. A few renderings that survived as relics show what would have been the sky tram from the Camden waterfront, toting folks along on five-minute journeys to Philly.

"This aerial tram would connect the two cities and land on the roof of a building over in Camden to provide sort of a different experience of crossing the river," said Joe Forkin, president of the Delaware River Waterfront Corp. "For a good while, it looked like the Simon project was going to go, but then it collapsed."

In 2000, before Simon Property Group pulled the plug on its facet of the plan, the Delaware River Port Authority had already advanced construction on the sky tram's initial infrastructure in Philadelphia and Camden.

Millions of dollars would be budgeted and spent on a "dead-a** proposal" that left Philadelphia with its arch "as a pathetic monument to boondoggling corrupt-a** city and state officials everywhere," the PhilaPhila development blog irreverently wrote of the project in 2011.

In the end, both cities were left with strange remnants of the river crossing tram that never was. Parallel work was completed in the river on the Camden side and similarly aborted when the project fizzled.

"It just never came to fruition," Forkin said. "In my recollection, there was some thought about whether it could still happen in a different way, but it never had significant momentum."

For years, visitors in the area of the Great Plaza amphitheater at Penn's Landing have wondered what exactly the arch was supposed to signify.

"We couldn't think of anything else to do with it, so we just put a 'Welcome to Penn's Landing' sign on it," Forkin said. "It was literally just there. It was serving no real function. That complicates stories, that complicates future development – like, what is this? Do we have to be respectful of it? Is this ever going to happen? The answer to that stuff was no, and we knew that."

In his 23 years with the DRWC, Forkin has always found humor in the oddity of the structure.

"It's been called everything from Stonehenge to Pi," Forkin said. "I'd even joke and say, in history at some point people were going to stand at it like it was a portal to something."

Fortunately, there are now much bigger plans afoot for the waterfront, including a $225 million park that will cap I-95 and reconnect Front Street to the riverfront between Chestnut and Walnut streets. The Delaware River Trail will run a two-way bike and walking trail adjacent to Columbus Boulevard from Washington Avenue to Spring Garden Street. And the South Street pedestrian bridge will be extended to the east side of Columbus Boulevard, letting visitors off at the waterfront. 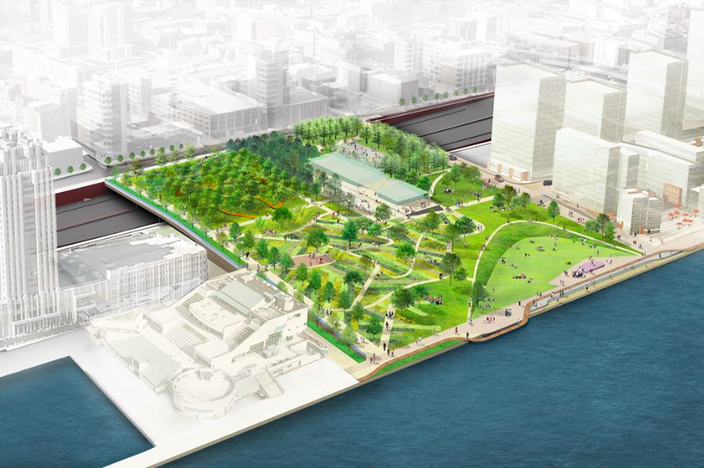 An artist's rendering shows the park Philadelphiaplans to build that would cover a portion of I-95 and better connect the Delaware River waterfront to Center City.

Forkin said the demolition of the tramway arch was supposed to start before the coronavirus pandemic, but stopped when construction activity was suspended. Pennsylvania Gov. Tom Wolf and city officials have since reinstated construction.

"We were presented here in these strange times with an opportunity," Forkin said. "We have about a three-month demolition of the tram. Not having as active of a waterfront as we would normally have set the timing up really well."

When the project is complete, the edge of the parking lot where the arch stood will simply be landscaped. The Penn's Landing signage already has come down, making the structure more mysteriously nondescript in the meantime.

In the midst of the COVID-19 pandemic, Forkin has been pleased to see residents are respectfully using the riverfront walkways and trails. They seem to be passing through to jog, wearing masks and not congregating. The traditional Mother's Day reopening of the Blue Cross RiverRink Summerfest, Spruce Street Harbor Park, Cherry Street Pier and the Great Plaza at Penn's Landing have all been delayed until further notice.

"We recognize the resource that the waterfront is and has become to people," Forkin said. "We recognize that people want to be there and relax and enjoy themselves near the river. We will put ourselves in the best position to best be able to further respond to that with further guidance from the city to provide that opportunity to everyone."