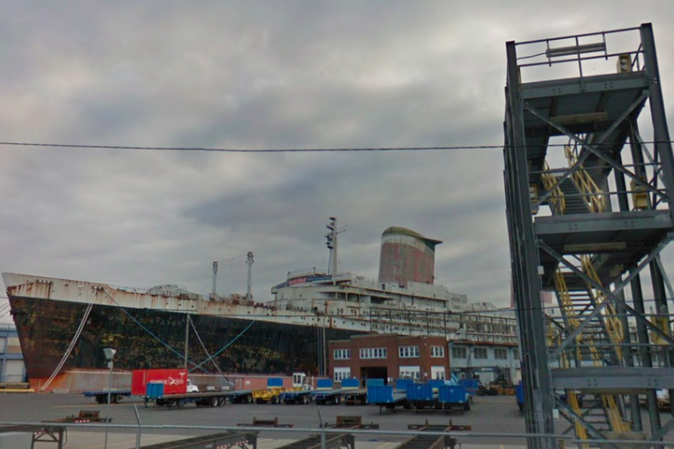 New York real estate developer RXR Realty hopes to transform the SS United States, which has been docked in Philadelphia for more than two decades, into a Airbnb venue with a brewery and food hall. Preservationists have fought for years to find a new life for the former luxury ocean liner.

Long-running efforts to preserve the SS United States may finally be gaining steam with the backing of a New York developer keen on reimagining the historic ship docked in Philadelphia.

Late in 2018, RXR Realty, a firm that specializes in rehabbing old structures, signed an agreement with the nonprofit SS United States Conservancy to explore possible uses for the defunct ocean liner.

At its height in 1952, the SS United States set a speed record on its maiden voyage from New York to London. The luxury ship was funded by the U.S. Department of Defense to develop the capability of transporting 15,000 troops across the Atlantic without having to refuel.

The ship was pulled from service in 1969 and traded hands for several years before docking on the Delaware River waterfront, where it has remained for more than two decades.

Previous attempts to rehabilitate the ship have all fallen apart, prompting the conservancy to step in and raise money to keep hope alive.

RXR Realty has been working with Airbnb on possible plans to refurbish the SS United States as a multipurpose venue, including a brewery and food hall, according to a report from Bloomberg. The multimillion dollar project could also include hotel rooms and a museum celebrating the ocean liner's history.

“The idea is to build a great public space that can become a destination for people to spend the day and be a part of history,” RXR Realty CEO Scott Rechler said.

There is no guarantee that a rehabilitated SS United States would remain in Philadelphia.

Rechler is reportedly presenting its plans to more than a half-dozen cities, including New York and San Francisco, that may be interested in the project.

If plans move forward, it appears that at least some of the early renovations to the ship could be completed at its current site in Philadelphia.

If a local government decides to jump on the project, work on the SS United States could reportedly begin as soon as late this year.