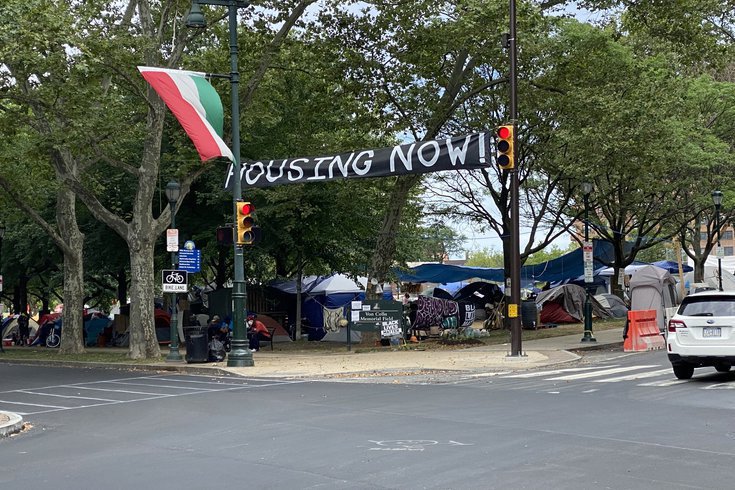 The two homeless protest encampments, located at 22nd and Ben Franklin Parkway and 21st and Ridge Ave., will remain in place while residents transition into the vacant homes and others explore alternative housing options, Philadelphia Housing Action said.

After a months-long standoff over two homeless encampments, city officials and Philadelphia Housing Action appear to have reached a tentative deal that will provide protest camp residents with 50 vacant homes to be placed in a community land trust.

As part of the deal, 50 mothers and children experiencing homelessness will be permitted to stay in 15 vacant city-owned houses, the organization said.

The two homeless protest encampments, located at 22nd and Ben Franklin Parkway and 21st and Ridge Ave., will remain in place while residents transition into the vacant homes and others explore alternative housing options.

City officials said that more details need to be worked out to end the homeless encampments.

“The City remains in negotiation with the representatives of the protest camps, but many details remain to be worked out,” the city said in a statement. “Any agreement will require a date certain by which the protest camps will be resolved.”

The city-owned houses covered in the agreement will be moved into a community land trust established by Philadelphia Housing Action, the group said.

The land trust will designate these properties for use as low-income housing, defined as $25,000 and below, and they will be controlled by local committees.

The city and the Philadelphia Housing Authority will be transferring properties that are available to the community land trust, which will allow for families to remain in the unavailable properties until the land trust can accommodate them elsewhere.

The houses being transferred will be slated for auction or sale and will not be removed from low-income housing availability or move people ahead of the Philadelphia Housing Authority's waiting list.

The community land trust will fill a significant gap in the low-income housing space by helping out those who might not be able to access other housing options due to criminal records or evictions histories, the organization said.

"This will be a landmark agreement," said OccupyPHA organizer Jennifer Bennetch. "Not only has a group of poor and homeless organizers managed through direct action to win an agreement that will set a precedent for the entire country, but we have also forced the city to exercise its power of the Philadelphia Housing Authority and finally get them to give up these vacant homes that have been blighting our communities for decades."

“We will continue to pressure the city to transfer more houses to be designated as permanent low-income housing, stabilize our communities and combat the displacement caused by market rate development and gentrification.”

Some activists believe that the tentative agreement is just a first step in providing more affordable housing across the city.

“It’s a good start but it’s also not enough,” said Black and Brown Workers Cooperative organizer Sterling Johnson. “There was already a major housing crisis in Philadelphia and we anticipate a wave of mass evictions on top of that due to COVID-19.

“The scale of the housing crisis would require thousands of new units of low-income housing but we feel that with this agreement we can at least get started moving people off the street and into homes before winter. This is only the beginning.”