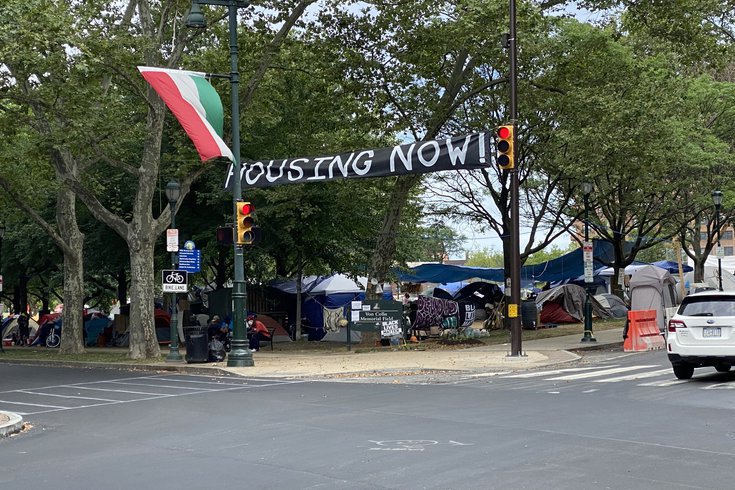 Philadelphia has set a Sept. 9 deadline for the residents of two homeless encampments to leave the premises on the Benjamin Franklin Parkway and Ridge Avenue.

Philadelphia officials have posted a third and final notice for resolution of the two homeless encampments on the Benjamin Franklin Parkway and Ridge Avenue, setting a Sept. 9 deadline for residents to clear the areas.

The notice comes after a federal judge last week rejected a legal challenge by encampment residents, who had sought an injunction to prevent the city from ending the two protests.

"The protests have brought new attention to the magnitude of the suffering endured, primarily by Black Philadelphians, and I appreciate all involved for shining a spotlight on this critical issue," Mayor Jim Kenney said. "We are committed to working together with homeless people and their many advocates and supporters for policies and programs that will make ending homelessness a reality. However, for the health and safety of all involved, including the surrounding community, we can no longer allow the camps to continue."

The encampments formed in mid-June as a response to Philadelphia's chronic homelessness and affordable housing crisis, which have been exacerbated by the coronavirus pandemic. The city's negotiations with protest organizers broke down over the issue of immediate permanent housing, specifically the use of vacant properties owned by the Philadelphia Housing Authority.

In last week's ruling, a federal judge determined that the city could "terminate and dissolve" the two encampments as long as residents are given at least three days' notice and safe storage for their belongings.

To date, the city says it has relocated at least 111 encampment residents to residential treatment centers, shelters and COVID-19 prevention sites. Officials also outlined a series of steps and initiatives taken in response to the demands made by protesters.

Among the projects being planned are a pilot Tiny House Village and a new rapid rehousing program with up to two years of rental assistance for individuals living on the street. New federal funds also have been made available to create 900-1,400 long-term housing units for those with very low or no income, as well as those with disabilities.

About 230 residents have been living at the tent encampments at various points since they formed in June.

City officials said they had received more than 400 complaints from area residents, who expressed concerns about crime and frustration over the delayed construction of a grocery store near the Ridge Avenue encampment.

The city, PHA and other partners will continue to provide homeless outreach over the week leading up to the Sept. 9 deadline.

"We are committed to working with camp organizers and those who are unhoused to continue to address the important issues that they have raised," said Eva Gladstein, Deputy Managing Director for Health and Human Services.