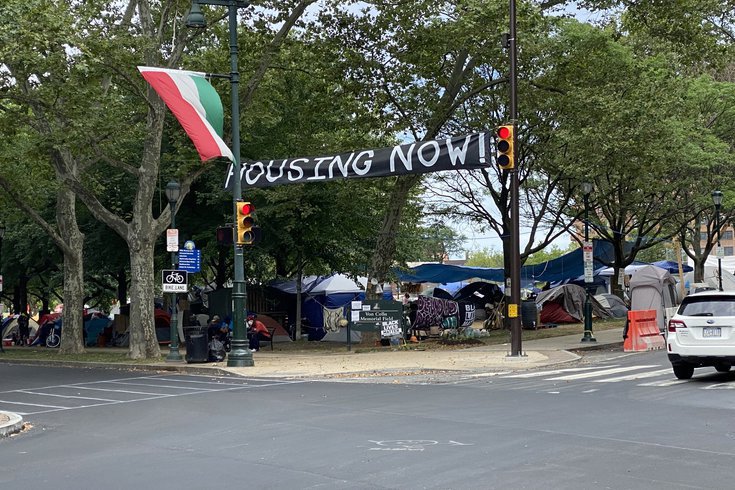 Philadelphia must give at least 72 hours' notice before clearing residents from homeless encampments on the Benjamin Franklin Parkway (shown above) and Ridge Avenue in North Philadelphia. A firm date for the city to remove the camps still has not been determined.

After several days of consideration, a federal judge ruled Tuesday that the city of Philadelphia is permitted to "dissolve and terminate" the homeless encampment protests on the Benjamin Franklin Parkway and Ridge Avenue in North Philadelphia.

As a result of the decision, the city will be required to provide 72 hours' notice to encampment residents before they are compelled to leave. The city may use "reasonable means" to evict the encampment and must provide storage and safekeeping of any property collected at the sites.

The ruling – detailed in the court document at the end of this article – acknowledged the complexity of the issues involved and the questions that clearing the encampments will leave unanswered.

In response to multiple Constitutional challenges, however, the review determined that the plaintiffs in the case were not able to demonstrate that the city would violate the encampment resident's rights, endanger them, destroy their property or deny them due process by dismantling the site.

We appreciate the Court's careful attention to this very complex matter. In light of today's ruling in the City's favor, we are currently evaluating our next steps. We are still deeply concerned about the health and safety of all involved, including the surrounding community. We maintain the position that the camps cannot continue indefinitely, however an updated timeline has not been established. I urge those still in the camps to voluntarily decamp and avail themselves of the beneficial services being offered.

The City has continued to offer its Homeless Connect services on a daily basis to campers by walking the perimeter or setting up tables nearby. So far, more than 100 campers have accepted emergency, temporary housing, rapid rehousing, safe haven and treatment. Those over the age of 65 and/or with chronic underlying health conditions that make them especially vulnerable to COVID, have been referred to the COVID Prevention Spaces, with services and meals provided on site. All of these options provided by the City include an individualized pathway to long-term housing.

We are encouraged that camp organizers have honored our request to take down empty tents. The footprint of the camp has shrunk. We are also appreciative of the involvement of Councilmembers Brooks and Gauthier in the negotiations.

The two encampments formed in mid-June as means to bring attention to Philadelphia's problem of chronic homelessness and its lack of affordable housing, issues that have grown increasingly problematic in the midst of the coronavirus pandemic. Approximately 230 people have resided in both camps.

In July, city officials backed away from plans to shut down the encampments in favor of attempting to negotiate a resolution that addressed as many of the protesters' demands as possible. Negotiations fell apart over the issue of immediate permanent housing and the transfer of vacant properties owned by the Philadelphia Housing Authority.

The city has offered to work with Philadelphia Housing Action, the coalition behind the encampments, on a number of their demands.

Last week, after the city posted another notice about its plan to clear the encampments, five homeless residents there filed a temporary restraining order. The motion included a set of demands to provide all encampments with safe and clean shelter, a clear path to permanent housing, and detailed steps to ensure all encampment property is stored and labeled.

City officials said more than 400 complaints have been filed by residents in neighborhoods surrounding the encampments, ranging from safety concerns and violence to unsanitary conditions and interference with the use of public lands and development projects.

During the court's review of the case, negotiations with Philadelphia Housing Action continued under the leadership of City Councilmembers Kendra Brooks and Jamie Gauthier. The status of those negotiations remained unclear on Tuesday afternoon.

A timeline for the removal of the encampments has not yet been determined.

Federal judge rules on future of Philadelphia's homeless encampment by PhillyVoice.com on Scribd