Homeless residents will be cited if they don't leave two sites, notice says 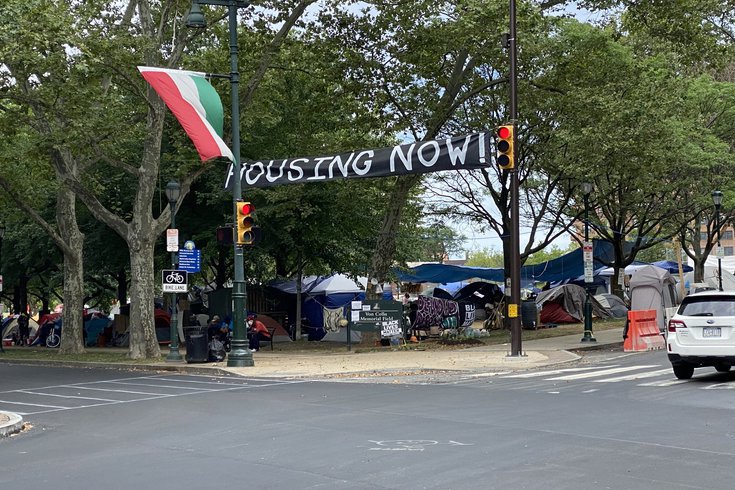 Philadelphia officials posted a formal notice Monday morning requiring the residents of two homeless encampments near the Benjamin Franklin Parkway and Ridge Avenue to clear the sites by Tuesday morning.

The two encampments, led by the Philadelphia Housing Action coalition, have persisted as protests since June. The organizers seek permanent housing solutions for residents of the encampments.

On July 10, the city announced that it would shut down the encampments the following week, but postponed further action in order to resume negotiations with the organizers.

"After several weeks of face-to-face discussions, and after more than two months of concerted efforts by our administration, I have come to the conclusion that further negotiations would be fruitless," Kenney said. "I take this step again with a heavy heart, as a last resort, and in recognition of the growing health and safety concerns at the sites."

The protest organizers have consistently centered their demands on the utilization of vacant Philadelphia Housing Authority properties that could serve as long-term housing solutions for the encampment residents.

Organizers have called for the transfer of vacant PHA property to a land trust operated and administered by the Workers Revolutionary Collective. They also requested an end to encampment resolutions and homeless sweeps that move unhoused people from place to place.

One of the main complaints about the city's outreach efforts is that the temporary housing solutions they offer encampment residents do not address the underlying problems.

"We have worked with the city to find people appropriate housing solutions wherever they may be available," Sterling Johnson, an organizer with the Black & Brown Workers Collective said last week. "I have personally filled out dozens of applications for hotels and treatment programs for the city, but the fact is that many of the encampment residents don’t qualify for these programs and the ones that do are routinely kicked out within days or weeks of being accepted. They often return to the encampment because it offers more than the city services."

'It's just better than what we had'

On Monday, Occupy PHA organizer Jennifer Bennetch told PhillyVoice that the group will try to mobilize as many people as possible to fight the city's plan in court. If that proves unsuccessful, the goal will be to ensure that encampment residents understand what's happening and can make a plan to relocate on short notice.

The city previously has described police intervention as a last resort, promising that outreach workers will be a part of any enforcement action to clear the encampments. A notice received by the protest organizers warned that those who do not leave will be cited.

"No one is trying to glorify that camp or say that it's a model moving forward." – Wiley Cunningham, Philadelphia Housing Action

Bennetch said that outreach always has been available and many residents have left the encampment of their own accord. While the city has been willing to offer these temporary respites, many residents simply end up returning.

"There's something not right with wherever the city is taking people, because they're always back out," said Bennetch, who added that shelter space and amenities have been limited by the COVID-19 crisis.

Despite reports of crime and neighborhood complaints over the past two months, encampment organizers believe there is a misperception about the people who occupy the two sites. Many of them are employed, but earn too little to put a roof over their head.

The visibility of the parkway encampment, located in a wealthy neighborhood, has exposed the severity of a problem that often goes unseen in the city's more affluent areas. The people who choose to live there are doing so as much for day-to-day survival as they are for the hope of more concerted action by the city to create a long-term solution for extreme low-income housing.

"The thing about the camp is that it's just better than what we had before," said Wiley Cunningham, a spokesperson for Philadelphia Housing Action. "No one is trying to glorify that camp or say that it's a model moving forward."

The second encampment is located near the PHA headquarters in North Philly.

'The encampment is not the solution'

The city issued a list of concrete actions it said it has offered to the organizers as part of their negotiations. Per a news release issued by the Mayor's Office:

Sanctioned Encampments: The City is willing to consider establishing a temporary sanctioned encampment at another site, but it must have the support of the community residents and the District Council member for that use.

Creation of new permanent housing units: The Office of Homeless Services (OHS) has issued an RFP dedicating ESG funds for Shared Housing and Project Based Rapid Rehousing. Another proposal for Shallow Rent will be forthcoming. The total funds on the table through these sources is more than $7M dollars.

The City agreed to and has opened 2 COVID prevention sites offering a total of 260 beds. To date, 17 people from JDT Camp have entered; more referrals are pending.

The City has made shelter, safe haven and treatment beds available. More than 80 individuals from the camp have been housed to date.

Moratorium on Sales of PHA Properties: PHA agrees to institute a Property Sale Moratorium on new fair market value property sales via auction, brokers or direct sales until completion of independent study not to exceed 9 months.

Community Concerns about PHA Scattered Sites: PHA will designate a Scattered Site Ombudsman to serve as primary point of contact for inquiries or complaints regarding vacant PHA owned units and to administer the CCRP.

Need for continued collaboration: The City has committed to continuing to work with Philadelphia Housing Action on homeless and treatment system reforms and the expansion of available permanent housing.

Negotiations broke down after the city asked the protest organizers to draw up a written agreement reflecting these commitments. The organizers stuck to their demands about the Philadelphia Housing Authority's properties, claiming they would remain at both encampment sites unless the city and PHA agreed to all of their demands.

“PHA, the city, and the encampment leaders all agree that everyone deserves decent housing and there is an affordable housing crisis," Jeremiah said in a statement. "However, the encampment is not the solution. The encampment leaders' unreasonable demands would have required PHA to violate federal policies or regulations and that is not acceptable."

Bennetch believes the city has been "deflecting" on the issue of PHA properties. The protest organizers claim Philadelphia officials have the power to act unilaterally without federal approval.

Kenney thanked surrounding communities for their patience and said that while he shares the protesters' concerns about a lack of affordable housing, he lost hope in negotiating a resolution.

"The continued shifting of camp leaders’ demands, and the fact that some of their repeated demands are out of the city’s control, or unachievable in the time frame that they demand, all contribute to this difficult decision."