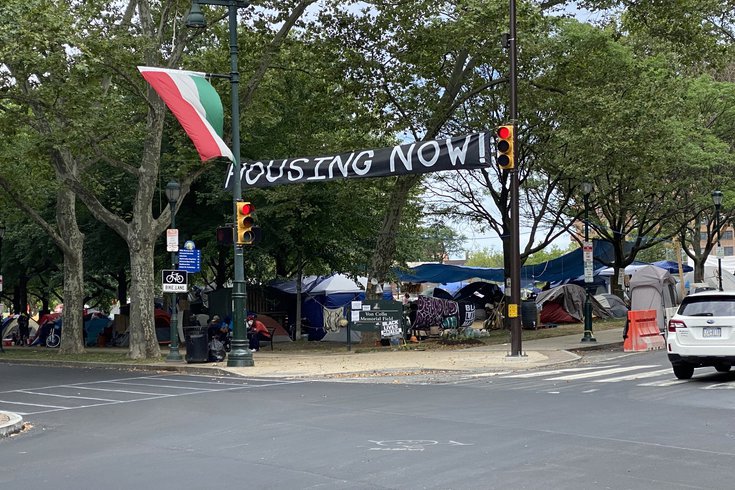 Philadelphia Housing Action, a coalition of groups advocating for reform to address homelessness, has maintained a tent encampment on the Benjamin Franklin Parkway since June 10. The city won't move forward with a July 17 deadline to clear the area, officials said.

Philadelphia officials will not shut down the homeless encampment on the Benjamin Franklin Parkway on Friday as previously planned, citing progress toward a mutual resolution with organizers.

The parkway encampment has been in place near 22nd Street since June 10, when protesters formed a tent neighborhood and published a list of demands for the city to address affordable housing and chronic homelessness with sustainable solutions.

At a press conference last week, officials said the camp would be cleared on July 17, but did not elaborate on what methods the city would use to remove residents assembled there. Between 70 and 80 people remained at the site as of last week.

“We’re postponing the closure because conversations with the group are ongoing and I plan to meet with several camp representatives next week,” said Mayor Jim Kenney. “A mutual resolution has always been our preferred outcome. We appreciate their willingness to engage in productive dialogue, and I’m hopeful that we will reach a peaceful resolution soon.”

Kenney said the meeting will be private and will include representatives from both the Parkway encampment and the protesters at a separate site near Philadelphia Housing Authority headquarters in North Philadelphia.

Philadelphia Housing Action, the coalition of organizations behind the encampment, had cut off negotiations with the city last week prior to the announcement that the encampment would be shut down.

OccupyPHA, the Worker’s Revolutionary Collective (WRC) and the Black and Brown Worker’s Cooperative have previously demanded the emergency transfer of vacant city-owned properties to a community land trust that would be operated and administered by the WRC. They also had sought a city sanction for the Parkway encampment until a long-term solution is developed.

In the past several days, numerous outreach organizations and city offices have ramped up efforts to communicate with encampment residents to find temporary housing solutions.

“We’re pleased that over the past few days, 17 placements, including two couples, to safe havens, recovery housing and shelter, have occurred, on top of the 17 placements of older adults and people with disabilities into the COVID Prevention Space,” said Liz Hersh, director of the city’s Office of Homeless Services. “The City and our partners will continue outreach so everyone in the camp has a housing plan and a place to go.”

The protesters, however, have maintained that temporary fixes will not resolve the underlying problems facing those who joined the encampment. Mayor Kenney acknowledged the need for more dedicated reform in his statement on Thursday.

“This demonstration activity casts an important light on the racial inequities in our society that impact homelessness and frankly have informed inadequate solutions," Kenney said. "Our administration shares the belief that policy failures for generations have brought us to this point, and we are committed to enacting meaningful reforms that help keep people in their homes, expand affordable housing, and improve pathways to home ownership in the city of Philadelphia – especially for communities of color.”

The mayor said that the use of police officers to remove people from the encampment would be a last resort, but added that significant concerns about hygiene, violence and public safety are reaching a critical point. He stressed that the Parkway encampment is not a viable long-term solution.

"There will not be a house (right away) for every single person at that encampment, but what we hope to be able to do is address their needs now and get them into the system, so that they can eventually be housed," Kenney said.

The mayor lamented that protest organizers have resisted allowing outreach groups to directly interact with residents inside the encampment. Protest organizer Jennifer Bennetch said last week that this assessment doesn't offer a complete picture of what is involved.

“What they leave out is that once outreach workers enter the camp, the clock starts ticking for eviction according to their own published internal guidelines for ‘encampment resolution,'” said Bennetch. “We barred homeless outreach precisely for this reason, to protect the camp from eviction.”

Protest organizers indicated this week that they did not intend to vacate the Benjamin Franklin Parkway camp or the demonstration in North Philadelphia by Friday. Some of the tents at the Parkway have been moved in recent days to the Azalea Garden in Fairmount Park.

In past negotiations with organizers, the city has said it's committed to the establishment of a tiny house village and would work collaboratively on the development of a sanctioned encampment at another site in Philadelphia.

Health Commissioner Dr. Thomas Farley responded Thursday to the complaint among some encampment residents that they feel safer from COVID-19 outdoors than they would indoors at a shelter.

While some COVID-19 cases have been traced to individuals at the encampment, city officials said it's unclear whether those people remain there.

Protest organizers insist that vacant properties owned by the Philadelphia Housing Authority should be turned over to the WRC, but the city claims it cannot take such action without intervention by the federal government.

Kelvin A. Jeremiah, president and CEO of the Philadelphia Housing Authority, explained the organization's current position during a press briefing on Thursday.

"There are about 47,000 people on PHA's waiting list," Jeremiah said. "In our view, it would be fundamentally unfair to have folks who have not been in the pipeline, who have not been waiting for housing, jump that pipeline simply because they were able to get into this protest site, for example."

Jeremiah added that PHA's properties are held in trust to the federal government, and that he is not able to turn over units without going through a regulatory process that can take up to two years, in some cases. He said the PHA would be amenable to reviewing that process, but the protesters' demands are not feasible at this time.

In announcing the postponement on Thursday, the city did not immediately indicate a revised timeline for action to clear either of the protest sites.

"We want to continue to try to negotiate and have interaction with the folks there," Kenney said. "We understand their motives are sincere and they want to see people housed, as we do. It's a national problem, it's a statewide problem and it's a local problem."