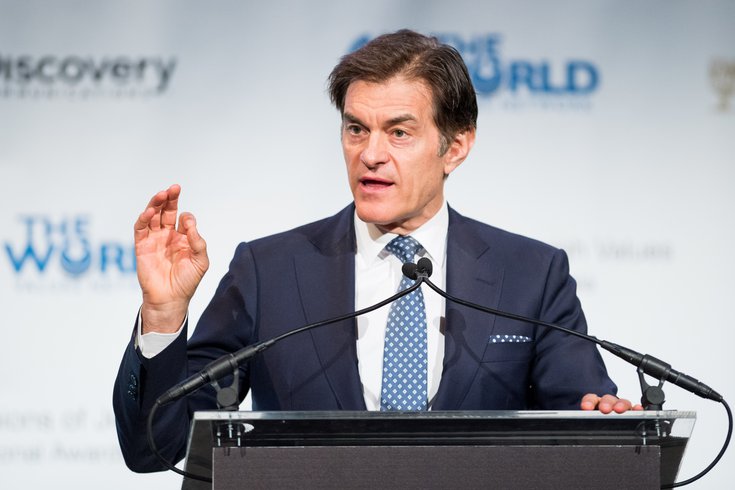 Philadelphians will be seeing a lot more of Dr. Mehmet Oz after the heart surgeon jumped into Pennsylvania's hotly-contested U.S. Senate election earlier this week.

But the physician will not be visible to local residents on his daily syndicated talk show for the foreseeable future.

FOX 29 has temporarily pulled "The Dr. Oz Show" off the air in the Philadelphia television market in anticipation of Federal Communications Commission rules that mandate equal coverage for rival senatorial candidates in the state, Deadline reported.

Oz's health and wellness program has also been temporarily pulled off of stations in the New York City and Cleveland television markets due to each's respective reach into parts of Pennsylvania.

Other Pennsylvania television markets may follow suit, according to the Associated Press. "The Dr. Oz Show" also airs in the Wilkes-Barre, Erie, Harrisburg, Johnstown and Pittsburgh markets.

FOX 29 has since been replaying the third hour of "Good Day Philadelphia" in the 2 p.m. time slot that Oz's hour-long weekday program typically occupies. "The Dr. Oz Show" will not return to the network until his campaign has concluded.

Pennsylvania television networks are technically not required to follow the FCC's equal coverage rules until Oz becomes a "legal qualified candidate" and is deemed eligible for the ballot, according to People.

Additionally, the FCC's guidelines only apply to where the candidate is running for office and does not require Oz to suspend production of his show. Therefore, "The Dr. Oz Show" can continue to air in other markets across the country where equal coverage rules are not applicable, the Inquirer reported.

However, a new spinoff show called "The Dish," hosted by Oz's daughter Daphne Oz, is expected to fill the series' time slot for the duration of the campaign starting Jan. 18.

Oz's career as a television personality began when he regularly appeared as a health expert on "The Oprah Winfrey Show" for six years.

"The Dr. Oz Show" began in 2009 and has since been awarded 10 Daytime Emmys. Filmed in New York City, the show is expected to continue airing new episodes through 2023.

However, Oz's program has been criticized at times for promoting unproven medical treatments and making misleading scientific claims.

Oz, 61, said Tuesday that he will run for the U.S. Senate in Pennsylvania as a Republican to replace outgoing GOP Sen. Pat Toomey in 2022. The election is shaping up to be one of the most competitive Senate races next fall and could help determine which party ends up in the majority.

Besides earning his medical degree and a master's in business at the University of Pennsylvania, Oz has very few ties to the state.

He was born in Ohio, raised in Delaware and has spent the last several decades living in Bergen County, New Jersey. His medical practice has been based at New York-Presbyterian Columbia University Medical Center in Manhattan.

After having voted in North Jersey for three decades, Oz registered to vote at his wife's parents home' in Bryn Athyn, Montgomery County as a Republican last December. He has casted absentee ballots there twice.