Belmont Plateau's iconic sugar maple tree, nearly a century old, will be cut down this month 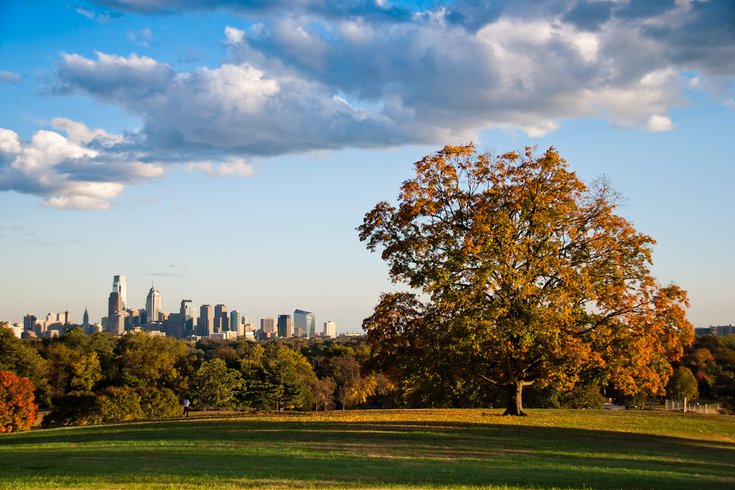 The sugar maple tree at Belmont Plateau will be cut down in December. The tree has been a fixture of West Fairmount Park for nearly a century and has graced one of the best views Philadelphia has to offer.

A majestic sugar maple tree that has stood on Belmont Plateau in West Fairmount Park for almost 100 years will be cut down before the end of the year due to its declining health, Parks & Recreation officials said.

The beloved tree has been a favorite picnic spot for generations of city-dwellers and an ideal foreground for pictures of the Philadelphia skyline. But it is slowly dying, putting the city in a position to make a difficult choice.

"The loss of the tree is partly due to its age and partly due to human activity," the city said in a news release earlier this month. "Also, climate change is impacting the survival of sugar maple trees in this region."

Arborists at Parks & Rec estimated that the tree is between 90-100 years old, but will determine a more exact age once it has been cut down and the rings in its trunk can be counted.

Sugar maples, native to the northeastern U.S. and Canada, are best-known for their bright fall foliage and their sap, which produces maple syrup. Under ideal conditions, they can live 300 years or more. The species is best suited for colder temperatures and snowpack that helps preserve tree roots during the dormant winter season. When winters are warmer and there's less snow, the growth of a sugar maple can be negatively impacted.

Once the sugar maple on Belmont Plateau has been taken down, its trunks and large limbs will be milled into lumber in partnership with local milners, a spokesperson said.. Common commercial uses for sugar maple lumber include bowling alleys and pins, baseball bats, basketball courts and guitar necks.

Parks & Rec is encouraging residents to pay a final visit to the sugar maple and share photos on social media using the hashtag #belmontmaple.

Hard to believe the #belmontmaple will be no more. It’ll forever rank in the iconic images of Philly. pic.twitter.com/SF5I78UZ4d

Awwwww RIP to the Belmont Plateau tree. There you stood - huge and majestic and stately - as you watched over the city #belmontmaple https://t.co/lSvWYUUzfN

All hail the #belmontmaple. You know, I’m pretty sure you can glimpse it in the background in the video for Summertime by DJ Jazzy Jeff & the Fresh Prince (A place called the Plateau is where everybody goes!). I’ll have to take a look at the later to see if I’m remembering right https://t.co/bxCRqnrW77

Ran past this tree hundreds of times during nine years of Cross Country races 1986-1994. Picture taken 10/12/2012 at the Catholic League Championships (jogged in Alumni race even though I wasn’t one) #belmontmaple pic.twitter.com/hpEfRCZPla

@PhilaParkandRec any chance we can get a piece of the #belmontmaple? @imconfused and I were engaged and married under it! pic.twitter.com/EjXFesZfyR

As sad as it will be to say goodbye to the tree, the city plans to replant at the site next Arbor Day, April 29th. Three black gum trees will be planted near the location of the sugar maple. That species also is known for its brilliant fall foliage and fruit that attracts a variety of bird species.

An exact date for the sugar maple to come down was not provided, but it is expected sooner than later.

"We encourage park visitors to share their memories and photos of the Belmont Plateau Sugar Maple as part of a special 'tree-bute,'" Parks & Rec officials said.