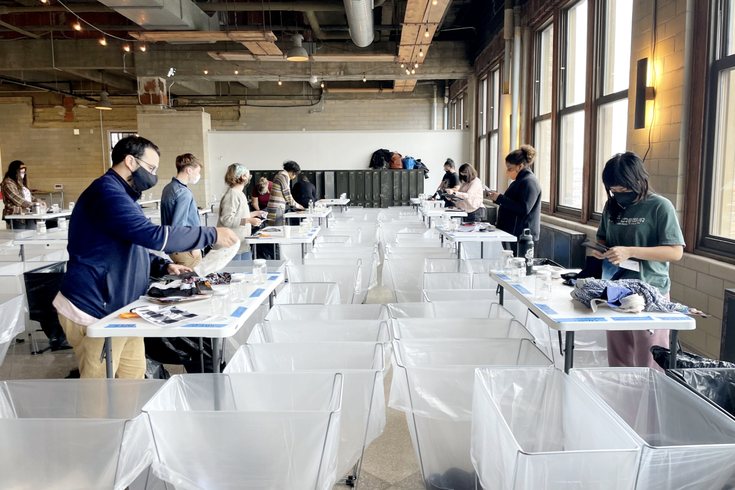 Brooklyn-based textile recycling nonprofit Fabscrap has moved into Philadelphia's Bok Building at 1901 S. Ninth St. in East Passyunk. The organization recycles and reuses commercial textile waste, diverting it from landfills and offering designers in the community a place to purchase fabric scraps.

Americans generate about 16 million tons of textile waste every year, accounting for about 6% of the country's municipal waste stream. Compared to plastics – which make up about 13% – textile waste poses an environmental problem that simply doesn't get as much as attention as it should in larger discussions about sustainability.

More than 62% of discarded fabrics go to landfills, another 18% get incinerated, a small share get exported and less than 15% end up recycled, according to the Environmental Protection Agency.

Brooklyn-based nonprofit Fabscrap works to correct this imbalance by providing an outlet for businesses to get rid of excess commercial fabrics in a way that prioritizes recycling and upcycling.

This week, the organization marked its first expansion outside New York with a new location at the Bok Building in South Philadelphia. The site will serve as a home base for the region to do its part in mitigating textile waste while providing a new source for independent designers to pick up a variety of cheap materials, too.

Fabscrap was founded in 2016 by Jessica Schreiber, formerly an employee of New York City's sanitation department. Schreiber had been working in a program to recycle residential textile waste and she recognized the scale of unmet potential for commercial textile recycling, which quietly dwarfs the mountains of old clothing and tattered sheets we toss away as households.

On the post-consumer side – the finished products we use and want to get rid of – textile waste sometimes gets masked by the prevalence of clothing donation drop-offs and thrift stores.

"Post-consumer recycling is not ideal and it's not perfect by any means, but a lot of cities have some kind of programming to take in post-consumer textiles," said Lindsey Troop, general manager for Fabscrap's new Philadelphia location. "There's Goodwill, Salvation Army, thrift stores."

But in New York City, Schreiber kept getting contacted by fashion brands and other companies that wanted to recycle their excess, whether from product design and development or from settings like hospitals that need a sustainable way to get rid of linens.

"It's a very large hole in the recycling world," Troop said, adding that in New York City, there's an estimated 40 pounds of pre-consumer textile waste for every 1 pound of post-consumer textile waste. "It's just this really large problem that there's been no solution for, so that's why we're tackling that specifically."

The Fabscrap outpost at the Bok Building, like its counterpart in Brooklyn, will cater primarily to businesses that need their fabric scraps picked up. The materials will be collected multiple times daily on different routes and taken to the Bok Building to be processed and consolidated. 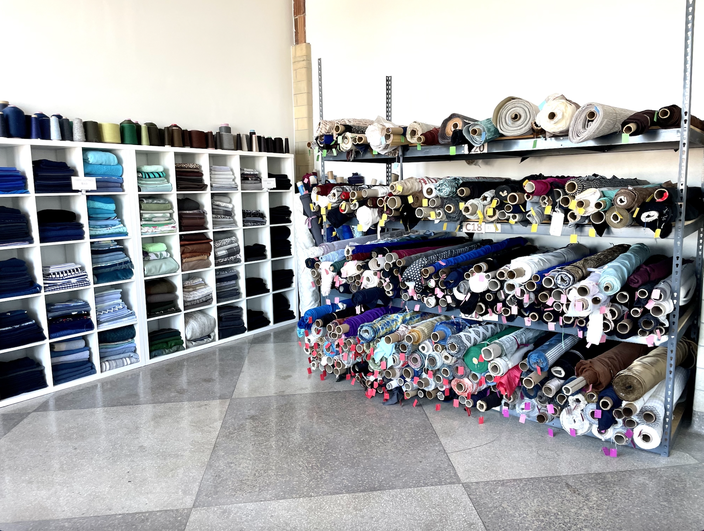 From there, the sorted fabrics may be shredded and recycled for reuse in a range of products – insulation, carpet padding, furniture lining and moving blankets, for example.

On the direct reuse side, Fabscrap invites all artists, crafters, quilters, sewers, teachers and designers to make appointments to visit the warehouse and shop for scraps. The business also has an online store that sells some larger pieces and "scrap packs" that are organized by color.

Much of the processing and sorting of fabrics will will be handled by volunteers, who will have the perk of receiving five free pounds of scrap that they can take for personal use.

"Where the Philadelphia community can really help is through volunteering," Troop said. "If they want to feel like they're part of the solution to textile, then they can come and sort through the material with us. That's really how we get through all of the waste that we pick up. We can always use the extra hands."

In New York City, the nonprofit picks up about 6,000 pounds of textiles each week. Troop expects that number to be similar in Philadelphia as brands sign on with Fabscrap. The organization already has close relationships with Urban Outfitters and Nordstrom, which have provided significant funding to help the Fabscrap to deeper reach into the Mid-Atlantic by serving South Jersey, Baltimore and Washington, D.C.

While Fabscrap is not a clothing drop-off location for the public, there are some items that people are welcome to take there.

"If someone in Philadelphia has sewing scraps or extra fabric that they bought and didn't use, or yarns and threads and buttons and things that they're no longer using, we will offer that recycling service to residents," Troop said. "It's definitely a smaller scale." 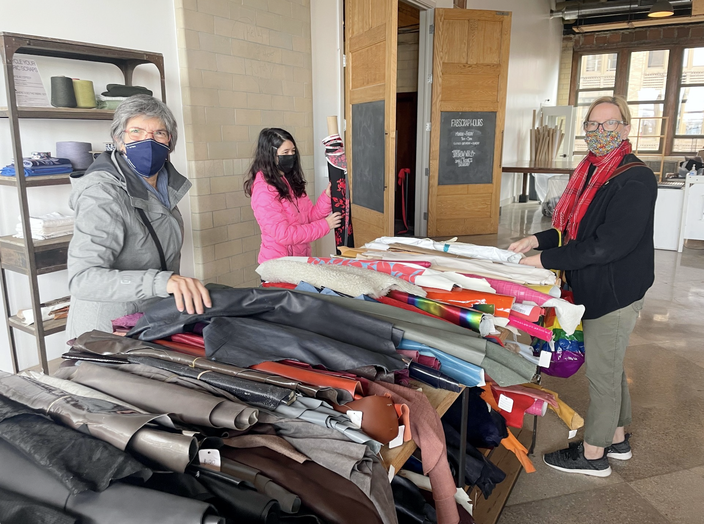 Since launching in 2016, Fabscrap has partnered with more than 500 businesses and diverted more than 655,000 pounds of fabric from landfill. Their recycling partners come from a range of industries including fashion, interior design and entertainment.

Prior to the COVID-19 pandemic, Fabscrap had planned to open its second location Los Angeles. When the lockdowns hit, the nonprofit suspended operations for several months and ultimately decided Philadelphia would be an excellent place to branch out instead.

Getting settled in Philadelphia will be a process as more businesses and community members learn about Fabscrap. It's also an opportunity for the city to get a better handle on its own waste, since the Philadelphia's recycling programs are not as developed as those in New York.

"We are working with a task force of other Philadelphia businesses to get data and more information on how much textile waste Philadelphians are throwing out each year," Troop said. "New York is heavily fashion companies. In Philadelphia and in Pennsylvania, we do expect our demographic for businesses to skew a little different.We're kind of learning what that is, and we're working with the community to figure out where the needs are."

Troop pointed to a number of fashion and apparel brands in Philadelphia, many of them smaller companies, that can take advantage of Fabscrap's recycling services. She also noted the presence of interior design companies in the area that have upholstery fabrics that will be desirable to designers and people who sew.

"We're happy to work with companies of any size," Troop said. "They don't have to produce a ton of waste. We'll take any amount."