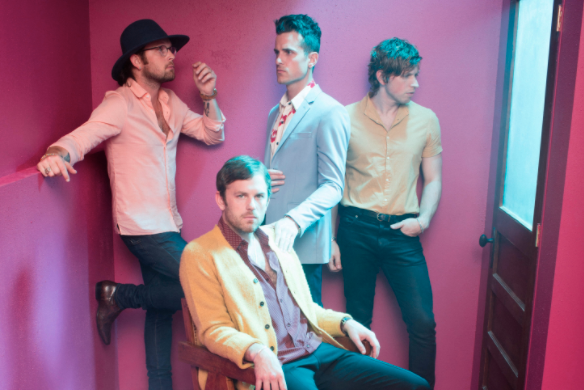 Once upon a time, such swaggering singer-songwriters as David Bowie, Mick Jagger and Iggy Pop made headlines for what they accomplished on and off stage.

However, in this mannered era in which cameras are ubiquitous, debauchery is dialed down. The Kings of Leon may be our last rock stars. During a chat before Kings of Leon frontman Caleb Followill tied the knot in 2011, I asked him to detail the downside of entertaining a groupie post-show. Followill revealed that he once fell asleep after having sex with a fan and she stole his $1,200 jacket. He solved the problem by hiring an intimidating security guard.

Followill revealed that he once fell asleep after having sex with a fan and she stole his $1,200 jacket."

“That way a girl can’t leave with anything but what she came in with,” Followill said.

Spoken like a true rock star. Those wild days are in the rearview for the members of the Kings of Leon, who will headline Radio 104.5’s 10th Birthday Celebration Saturday, May 13, at the BB&T Pavilion. Each of the four is married and three have children.

“I remember what those crazy days were like,” guitarist Matthew Followill said. “That especially goes for Caleb, who lived the life.”

These days, the band’s wild side is channeled through its music. “WALLS,” the band’s latest album, is a much-needed change in direction. “WALLS,” the first with producer Markus Dravs (Arcade Fire, Mumford & Sons), is Kings of Leon's loosest effort since the 2005 classic “A-Ha Shake Heartbreak,” which was crafted at the peak of their hedonistic era.

“I think the album sounds like it does, in large part, due to Markus, who was what we needed,” Matthew Followill said while calling from Los Angeles.

“He had no problem telling us 'no,' which was a good thing. He pushed us hard. He was great with arrangements. It was refreshing, not just doing the same old thing in terms of verse-chorus-verse.”

Kings of Leon, which also includes bassist Jared Followill and drummer Nathan Followill, impressed four months ago during an energetic 26-song set at the Wells Fargo Center with a healthy mix of fresh and vintage material.

“We try to spread it out in terms of what we play,” Followill said.

But we needed the break to be with our kids. Life is a lot different than it once was. It was the rock lifestyle when we were young."

“Getting back out on the road has been just what we needed. It’s been awhile [three years] in between tours.”

The reason for the extended hiatus is family.

“A decade ago, we could just go from the studio to touring, to writing and repeating the process,” Followill said.

“But we needed the break to be with our kids. Life is a lot different than it once was. It was the rock lifestyle when we were young. Instead of living that revved-up way, we’re with our kids and wives and this sense of comfort is there for us. We’re still super inspired. It’s just different when you grow up. The most crazy part of our lives is the music, which is fine with us.”