The nominees for the 'Museum of Accomplished Philadelphians' are ...

Late last week, City Hall shared with PhillyVoice some 3,600 online submissions regarding the future of the Frank Rizzo statue and we couldn’t wait to share them all with you.

Of course, when such a contentious issue returns to the forefront of civic conversations, it roils all sides of the debate.

Setting the controversy aside for a few moments – if that’s even possible – one submission stuck in my mind over the weekend.

No, it’s not the parable shared by a resident who wrote about not moving a salad bowl from the table when the former police commissioner and mayor instructed him not to do so in the late Seventies.

That was totally great. I think we all can agree. But, it was another entry that made an impact. Here it is verbatim:

“Well i think the city should build or find a buildings put all of statues that city found in it and make name called ‘a people accomplishments museum in philly’ and charge people to go see it and this it out of public eyes and make monetary.”

Those 47 words got me pondering one question: Who would be in a hypothetical Museum of Accomplished Philadelphians?

What follows is a list of my 10 nominations for such an esteemed place in the City where America was born exactly 241 years, two months and three weeks ago.

I know some of you will disagree and want to submit nominations of your own. By all means, please do via email (subject line: Museum Nominations), Facebook, Twitter or in the comments section.

10. Frank Rizzo. Listen, he was the inspiration for the comment that sparked this post. And the debate about his statue have laid bare some important lingering societal issues that may not have gotten such a loud airing if but not for these discussions. For that, he warrants a place.

9. Jim Gardner. Heck, I’ve been watching him deliver the news of the day since I was an elementary schooler in South Jersey watching a tiny black-and-white TV. Dude’s a legend who, in some way, brought a potential career in journalism into my young mind and has kept Philadelphians moving closer to their world as friends. Respect.

8. Sister Mary Scullion. If only we could all be as selfless as Sister Mary, the leader of Project HOME.

7. Daryl Hall and John Oates. Sure, this spot could have been dedicated to Teddy Pendergrass, Chubby Checker, Patti Labelle, The Dead Milkmen, Will Smith and Jazzy Jeff, The Roots, Kenny Gamble/Leon Huff, Bobby Rydell, Billie Holiday, John Coltrane or any number of transcendent musical talents to come from our area. It’s just that I really like Hall & Oates and I’m the one making the nominations. So, here, enjoy “You Make My Dreams” ...

6. Ralph J. Roberts. He attended the late Germantown High School and later defined the cable-television industry as we know it today. His Comcast legacy – for better or worse – is redefining our skyline.

2. Octavius Valentine Catto. A civil rights leader, he was assassinated in 1871. On Tuesday, a statue in his honor will become the first piece of public art in the city's collection memorializing an African American. That is a big deal that shouldn’t get lost in the whirlwind surrounding the battle over a statue located at 15th and JFK. 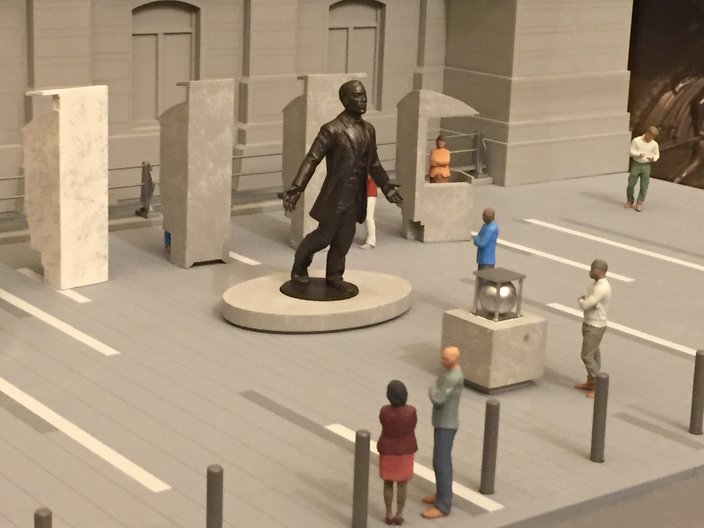 This model of the Octavius V. Catto memorial shows the statue, pillars and ballot box elements that will make up the $1.75 million project.

1. William Penn. The old-head planned and developed the very city we’re writing about today. And the street-grid mechanism that his leadership implemented makes it easier to get around to this day. If not for his vision, we would be as historically irrelevant as Pittsburgh, and nobody wants that.