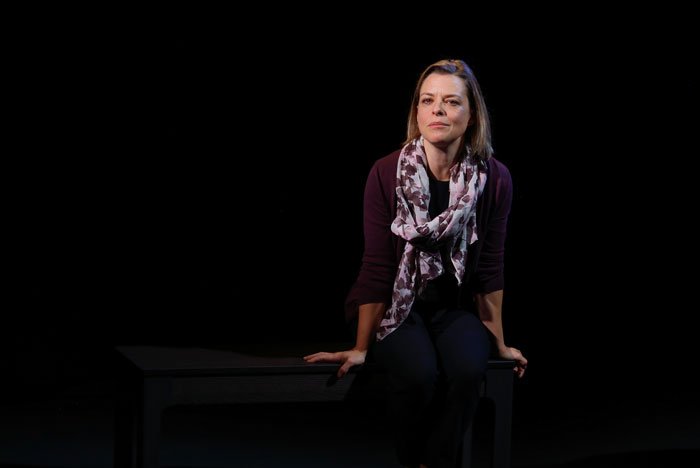 “On the Exhale” Actor Suli Holum.

Since South Philadelphia company Theatre Exile was founded in 1996, it has made a name for itself by producing challenging plays that explore the complexities of the human condition with the grit and passion the city of Philadelphia is known for.

For its latest production, a 70-minute, one-woman play titled On the Exhale, Theatre Exile explores the topic of grief, and the unpredictability of the resulting emotions and behaviors.

Written by Martín Zimmerman and directed by Matt Pfeiffer, On the Exhale asks the audience to wrestle with tragic circumstances by following and examining the actions — and reactions — of a college professor in the wake of gun violence, a topic that has become overtly political.

The creatives behind On the Exhale sought out to present a more complicated narrative around the issue.

“A woman navigating her grief doesn’t come out the way you expect it to, and that’s what On the Exhale explores,” said Deborah Block, Theatre Exile’s producing artistic director. “Mortality becomes gray, choices become gray. And that’s what the art form of theatre and Theatre Exile explore so well. The plays are centered around the human journey, not strictly ideology.”

Theatre Exile is working with Anti-Violence Partnership of Philadelphia (AVP) — a non-profit that provides intervention, prevention, and support programs — to help frame the conversation.

The organizations will host two post-show discussions on Thursday, December 12, and Wednesday, December 18, to allow for a deeper dialogue and to provide a safe space for audience members. Lisa Christian, AVP’s community services director, will lead the conversations.

“As someone who works every day with people experiencing traumatic grief, it was extraordinary to see this play. The playwright's ability to articulate the experience of grief is the most authentic I've ever heard,” said Casey McGovern, director of AVP’s Counseling Center.

“If we’re going to do gutsy plays, we have to take that responsibility seriously and we needed to find ways to support our audiences,” Theatre Exile’s Block said. “Having professional staff on hand made sense. We also get to shine the light on the work AVP is doing in our community. It’s a symbiotic relationship.”