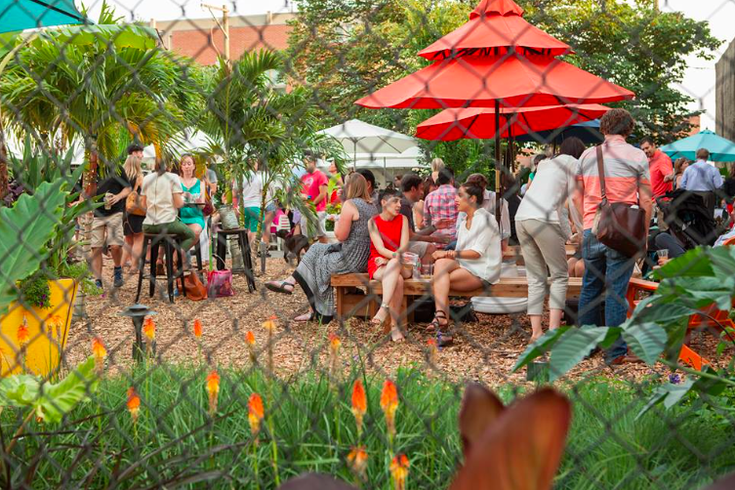 In 2014, the PHS made its home in the grassy lot right next to the Jamaican Jerk Hut at 15th and South streets.

This year marks the fifth year the Philadelphia Horticultural Society has stood ground on South Street to bring us the PHS Pop-Up Garden, now a mainstay in the frequently visited seasonal beer gardens marking the spring and summer.

For 2018, you can expect outdoor drinks, lazy hammocks, and roomy picnic tables in just a few weeks, when the space has its soft opening Thursday, April 26. The popular Graduate Hospital spot at 15th & South Streets also coincides with the opening of PHS' second pop-up beer garden – this time in uCity Square, at 36th and Filbert Streets, also opening April 26. This marks the second season for the PHS uCity location.

Though slated to open in late April, the South Street will have a grand opening a week later on Thursday, May 3, commemorated with events specific to Cinco de Mayo festivities. The site promises botanical-themed cocktails and events with the Royal Tavern and other businesses.

Throughout the season, you can also expect grub from favored Philly joints including Cantina Los Caballitos, Khyber Pass Pub, and Triangle Tavern. The design of the garden will be similar to that of 2017, with Moroccan-inspired lantern and decor to illuminate lush greenery every night.

At uCity Square, you can expect a tree- and plant-filled orchard and Mexican fare from Jose Pistola’s. Drink offerings include margaritas and craft beer.

The spaces will also be available for private parties, so keep that in mind if you have a summer birthday coming up. Quizzo, craft nights, and other activities (which will be shared closer to the opening) will be scheduled at the gardens through to October.