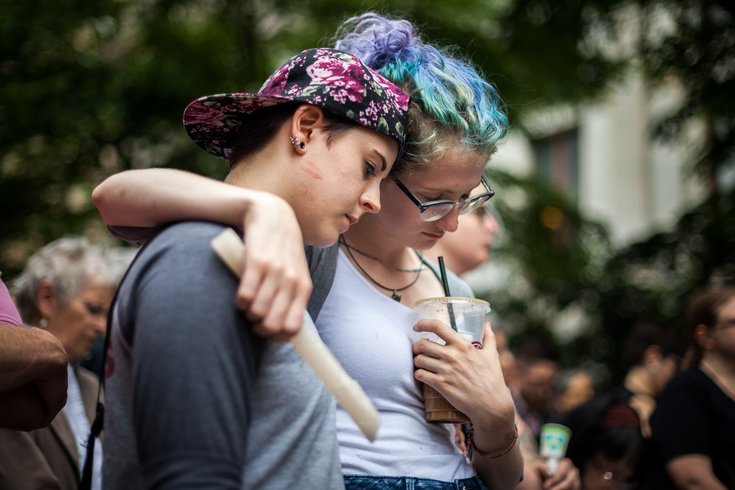 Rowan Hepps Keeney, left, and Annie Crabb reflect during a moment of silence during Monday night's vigil at City Hall to remember the victims of the Orlando, FL shooting.

Thousands gathered at City Hall on Monday evening for a somber memorial to honor the victims – and denounce the violence – of the senseless mass shooting in Orlando that took the lives of 49 people and left 53 others wounded, some gravely.

Led by Helen “Nellie” L. Fitzpatrick, director of Philadelphia's Office of Lesbian, Gay, Bisexual and Transgender Affairs, the memorial included a reading of the names of the victims of the shooting, as well as offering members of Philadelphia LGBTQ community the chance to share their grief and come together in the wake of the tragedy.

"You are safe here in the City of Philadelphia," Fitzpatrick told the gathered crowd to open the event. "This is a safe space for everyone."

Mayor Jim Kenney called the weekend shooting "devastating," saying that the vigil held on City Hall's North Apron, was intended to allow the LGBTQ community and others to come together to mourn and to rally against the bigotry and hate that lead to the events that unfolded at a gay dance club in Orlando.

"We must stand together, and I know we will," said the mayor.

Kenney also acknowledged the death of Akyra Murray, 18, a West Catholic Prep graduate and star basketball player who was killed in the shooting. As he spoke of Murray, some in the crowd sobbed.

"I can't tell you how devastating it is that she was in that club," said Kenney.

Another Philadelphia woman was in the nightclub with Murray. Patience Carter, 20, an intern at Fox29, was injured in the shooting, but is expected to recover. 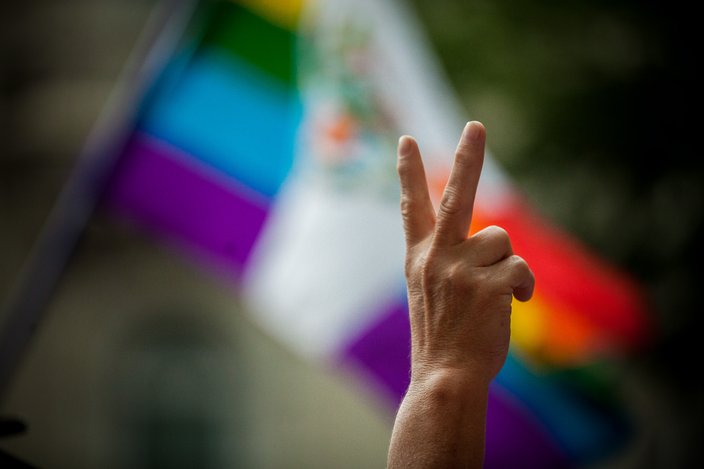 About 2 a.m. Sunday, as the Pulse nightclub prepared to close, Omar Mateen emerged, carrying an AR-15 and spraying the helpless crowd with bullets. Witnesses said he fired relentlessly – 20 rounds, 40, then 50 and more. In such tight quarters, the bullets could hardly miss.

When the gunfire finally stopped, 50 people were dead and dozens critically wounded in the deadliest mass shooting in modern U.S. history. Mateen died in a shootout with police.

And, while Kenney called for the LGBTQ community to come together in the wake of the tragedy, City Council president Darrell Clarke (D, 5th District) called for stricter gun laws in the hopes of preventing a repeat of the tragedy.

"I'm angry because this is utterly ridiculous," said Clarke. "You don't need a gun with 30 bullets in that clip to shoot a deer!"

"We are a community. We have the right to exist no matter what anyone else says." – Deja Lynn Alvarez, director, Divine Light LGBTQ Wellness Center and Shelter

Clarke's voice raised as those in attendance cheered his words as he called on politicians to create legislation that would "protect our citizens."

Deja Lynn Alvarez, director of Divine Light LGBTQ Wellness Center and Shelter at 2831 N. Hutchinson Street in North Philadelphia, said that the well-attended vigil on Monday night was proof that, no matter the obstacle, the LGBTQ community could not be broken by the actions of one deranged man.

"This shows people that we are here and we are going to stay here," said Alvarez.

She noted that, at the time of the incident, Pulse night club was a gay bar celebrating "Latin night." She said she disagrees with some commenters on the internet arguing that the narrative of the shooting shouldn't point out that many of the murderer's targets were gay, and – the majority – Latino.

"[They ask] why do we need to acknowledge that it was a gay club?" she asked. "Because, it was!"

As those in attendance lit candles, passing them around through the crowd, Alvarez called for community in the face of hatred.

"We are a community. We have the right to exist no matter what anyone else says," she said. 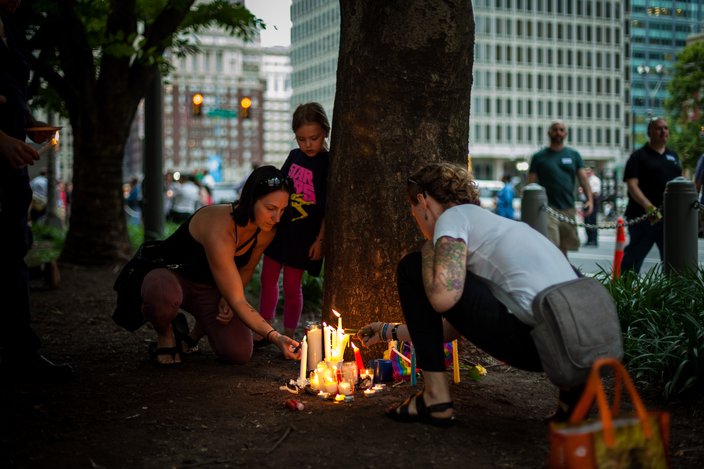 Those in attendance seemed moved by the vigil and, many interviewed, said they wanted to come out to support the LGBTQ community and, if they weren't a member of that community, they wanted to be there to support friends and family.

"It's something that is very important to me," she said. "If I don't do something for my family and my friends, I'm doing my life a disservice."

"It's crazy that all these people are here coming out to support Orlando. It really means a lot to me." – Simone DeLosangeles, 22, of Orlando, in Philadelphia on internship

For Sarah Stopper, 27, of Kensington, the vigil was doubly important, as she is a member of the LGBTQ community, and she's also a practicing member of the Muslim faith.

"Being either of these things is clearly a problem in the United States," she said. "There are lots of things about it that are really good and really scary at the same time."

This duality, she said, can make her feel like a victim, at times, especially when people on the internet are looking for someone to blame.

"It feels like you're just picking and choosing who you want to vilify," he said, noting both Muslims and members of the LGBTQ community are unjustly criticized. 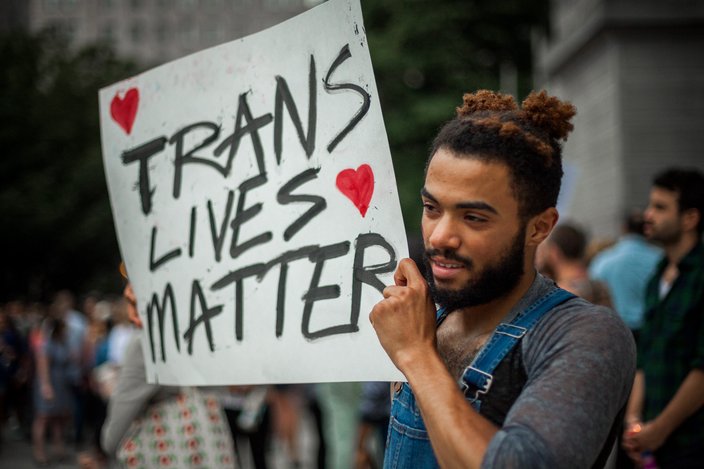 Jerry Carter of Fort Lauderdale, a former resident of Philadelphia who was in town to visit friends, said that he can remember the riots at the Stonewall Inn in New York City, where members of the LGBTQ community made a stand for equal rights in the late 1960s.

And, he said, he celebrated when the city made same-sex marriage legal.

But events like the weekend's tragic shooting, he said, remind him that even as far as rights have come for members of the LGBTQ community, there is work yet to be done.

"It took so long to get us where we are today," said Carter. "But there's still a lot of hate out there."

For Simone DeLosangeles, 22, of Orlando – in the city for an internship program – seeing Philadelphians hold a candlelight vigil for members of her home city was a touching moment that reminded her that, especially after a tragedy, people have the capacity for a great deal of love and friendship.

"It's crazy that all these people are here coming out to support Orlando," she said. "It really means a lot to me."

Many supporters held signs and talked quietly together after the day's speakers had finished for the night. Before leaving, a tearful Hermer McMullin, of Southwest Philadelphia, raised a red cardboard heart above his head.

Why the heart, he was asked.

"Because we lost our LGBTQ brothers and sisters," he replied.