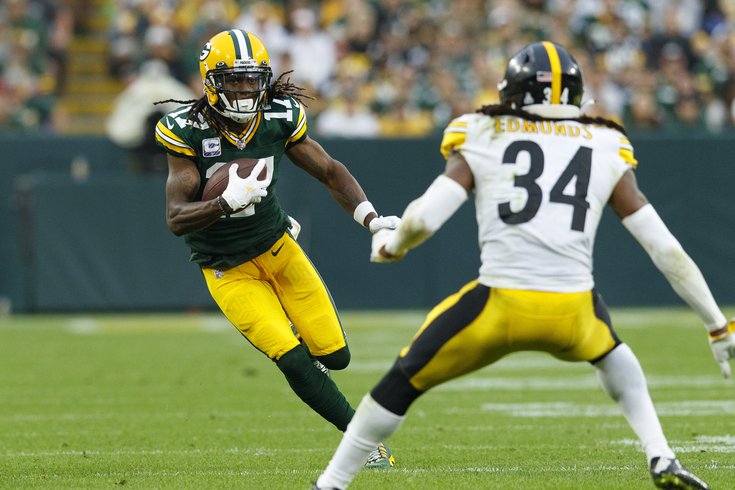 No, not Davante Adams. The other guy.

Last offseason, the Philadelphia Eagles were forced to sit out the fun part of NFL free agency, as they were mired in "salary cap hell." In 2022, the Birds still face challenges in becoming cap healthy once again, but with the salary cap expected to rise substantially in 2023, they can be a little more aggressive in adding talent on the open market.

Here are three likely low- or medium-priced free agents that I believe make sense for the Eagles.

A player that we know Nick Sirianni loves is Pascal. During his very first press conference after he became head coach of the Eagles, Sirianni named Pascal among 13 players that he felt he built special relationships with in his previous coaching stops.

I've been blessed to be around some unbelievable football players that I've built great relationships with, that I've went through battles with, and went through the ups and downs of a season. That's a special relationship that you're able to build with a player and a coach, and I value that.

I'd just like to mention a couple of them. And I know I'll leave some out again, but Philip Rivers, Keenan Allen, Dontrelle Inman, Tyrell Williams, Zach Pascal, T.Y. Hilton, Jacoby Brissett, Andrew Luck, Jack Doyle, Nyheim Hines, Danny Woodhead, Ryan Kelly and Quenton Nelson. It's been great just to get to know these guys and be in that room and be in the battle with them every single day. I can't wait to build those same relationships with the players here in Philadelphia.

And then finally, Pascal was integral in Sirianni's "dawg mentality" theme that the Eagles adopted in Sirianni's rookie head coaching season, as documented in a great story by Zach Berman of The Athletic.

If Sirianni has away sway on roster moves, it's a pretty good bet that he would love to have Pascal in Philly.

As an actual football signing, Pascal isn't the splashiest player on the market, but he could be a meat and potatoes guy with a smaller role in the Eagles' offense.

Over the last four seasons, Pascal has played in 64 games for the Colts, starting 44. His production isn't impressive, as he has averaged 38 catches for 472 yards and 4 TDs per season, despite ample playing time. It's perhaps noteworthy that Pascal was more productive and on an upward trajectory when Sirianni was the offensive coordinator, but his numbers took a dip after Sirianni left for Philly and he had to play with Carson Wentz.

A highlight reel from the 2020 season can be found here. Pascal has good size at 6'2, 219, and he has earned a reputation in Indy as one of the best blocking wide receivers in the NFL. For example:

If Sirianni wants a dirty work kind of receiver in his offense, like J.J. Arcega-Whiteside was in 2021, Pascal could be that guy, but with some ability to actually catch a football on occasion as well.

After the Texans selected him in the third round of the 2017 NFL Draft, Foreman had a disappointing first three seasons in the NFL, bouncing around from team to team, including the Texans, Colts, Titans, Falcons, and back to the Titans. In those three seasons, Foreman got just 107 carries.

Through the first eight weeks of the 2021 regular season, Foreman had zero carries. After the Titans lost Derrick Henry in a Week 8 win over the Colts, Foreman became a mainstay in Tennessee's offense. On the season, he carried 133 times for 566 yards (4.3 YPC) and 3 TDs, including three games of over 100 yards. In the Titans' lone playoff game, Foreman had four carries for 66 yards, including a 45-yard rumble that should have led to a Titans score, if not for a subsequent unlucky Ryan Tannehill INT.

Foreman has low mileage for a running back with five years of NFL experience, and he could be a fresher, more explosive power running upgrade over Jordan Howard. In the Titans' offense, he'll barely play unless Henry gets hurt. In the Eagles' offense, he could be a complementary piece to Miles Sanders, and shouldn't cost all that much.

Edmunds was a 2018 first-round pick of the Steelers who is likely headed to free agency after Pittsburgh declined to exercise his fifth-year option last offseason. It should be noted that the Steelers traded for Minkah Fitzpatrick, who was a first-round pick the same year as Edmunds, so having two safeties play on their fifth-year options in 2022 would have been quite expensive.

Fitzpatrick's fifth-year option was picked up, and Edmunds' wasn't. As such, Edmunds is a rare first-round pick who has been a decent player for the majority of his rookie contract who is set to become a free agent after just four seasons.

Edmunds has good size at 6'1, 217, he has never missed a game due to injury, he just turned 25 years old, and he has outstanding athleticism:

This is the type of still-ascending player that the Eagles should be betting on in free agency.