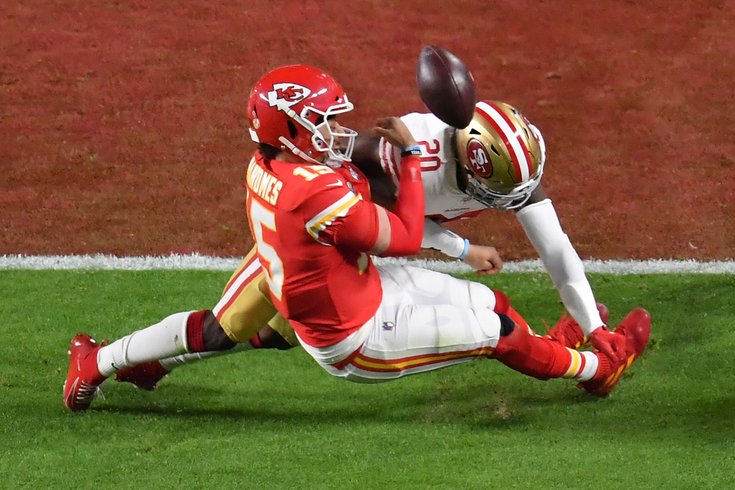 49ers S Jimmie Ward would bit an outstanding fit in the Eagles' defense, but he is also a major injury risk.

As we laid out in our "stay or go" series, the Philadelphia Eagles are heading into an offseason where they could see some prominent players move on from the team.

To note, in version 3.0, and likely in future versions, the players are less splashy, as the more high-profile guys who I think make sense have already been covered.

Robinson was suspended four times during his college career at Florida, but he has seemingly kept out of trouble in his first four years in the NFL. Back in 2016, the Eagles brought in Robinson for a pre-draft visit, but the Chiefs snagged him in the fourth round of that draft. Of course, the Eagles had a limited number of early picks in that draft, as a result of trading up to grab Carson Wentz.

Playing in an offense with Travis Kelce, Tyreek Hill, Sammy Watkins, and Mecole Hardman, Robinson has not had many starting opportunities, but he still managed to carve out a role as yet another playmaker for Patrick Mahomes. While Robinson only ran a 4.59 at the 2016 Combine, he was thought of as a prospect with good speed, and that has shown up at the next level. A highlight reel:

At just 25 years of age, Robinson is an ascending player, and his best years could lie ahead.

Waynes was the 11th overall pick in the 2015 NFL Draft, and his career to date has been something of a disappointment, as he has not become the star corner the Vikings hoped he would be. However, he is still a perfectly competent starting cornerback, and arguably the Vikings' best corner in 2019, with Xavier Rhodes' play falling off dramatically.

Waynes went 11th overall because he ran a blistering 4.31 40 at the 2015 NFL Combine. Obviously, he would instantaneously become the Eagles' fastest corner, if they were to bring him in, taking that title away from Ronald Darby, who the Eagles are likely to move on from this offseason. Unlike Darby, however, Waynes can/will tackle.

Over five seasons, Waynes' "meh" numbers include 247 tackles, 7 career INTs, and 2 forced fumbles. However, he has been durable (6 career games missed), and he can actually run with the league's faster receivers, which is more than what can be said for the Eagles' current corners.

On Sunday, we published a story about the Eagles' big plays allowed in 2019, showing all 16 of the 40-plus yard pass plays they surrendered, as well as some other big plays that went for a hair under 40 yards. While it was easy to see how bad the corners were all season long, the exercise of putting video of all of those plays in one place really shined a light on the number of times that Rodney McLeod was at least partly culpable.

That has to change in 2020, especially if Jim Schwartz wants to continue to play a large number of single-high looks.

He can also lay the wood when big hit opportunities are presented:

He checks a couple of other boxes for Schwartz-style safeties:

Of course, the biggest concern with Ward is his lengthy injury history, via Sports Injury Predictor: