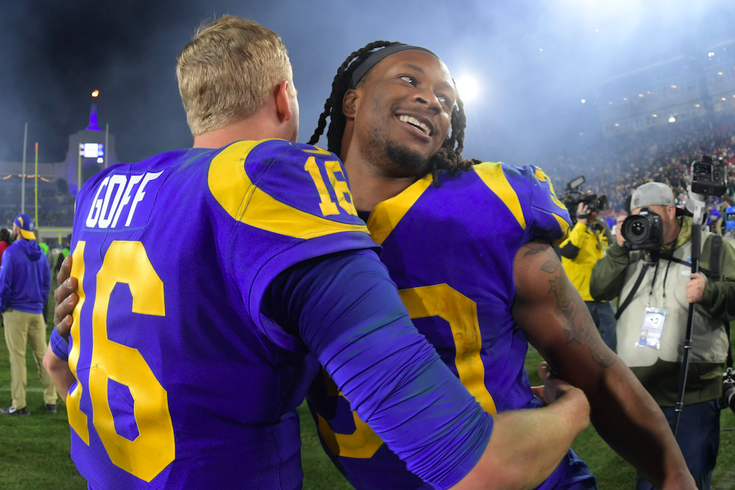 The Los Angeles Rams will have a chance to hand the New England Patriots their second consecutive Super Bowl loss this Sunday in Atlanta.

Head coach Sean McVay will need to be creative to keep up with a reliably strong Patriots offense. Even if the Rams find themselves holding a lead, as the Eagles did well into the second half of Super Bowl LII, they'll likely need to make some gutsy play calls to get there and stay there.

Could they opt for something like, say, the Philly Special?

Todd Gurley when asked today about the prospect of the Rams reprising the Eagles' "Philly Special" trick play in last year's Super Bowl against the Patriots: “Goff can’t catch.”

Way to throw your quarterback under the bus, Gurley. On the other hand, Tom Brady can't catch, either — and he's supposed to be the GOAT.

Goff, who's never caught an NFL pass, had two receptions during his three seasons at Cal. One of those catches was for 11 yards and the other was for -1.

That doesn't mean the Rams can't find ways to spice up their playbook in critical situations, or when the Patriots would least suspect it. Remember that the Patriots called their fake — the one Brady dropped — before Nick Foles suggested running the Philly Special.

Eagles fans have plenty to watch for in Sunday's game. The inevitable comparison of Goff and Carson Wentz at this stage in their careers will be a narrative that takes on added fire going into next season.

It's doubtful we'll see the Philly Special reappear in Sunday's game, but there's probably a good prop bet out there on whether the Rams will show the world a Hollywood Special.

I really like the Philly Special Play in Super Bowl 52 against the Patriots last year, how about the Hollywood Special by Jared Goff, and Todd Gurley @RamsNFL #SBLIII