A recap of the Eagles' injury-filled 2018 season, in stick figure form 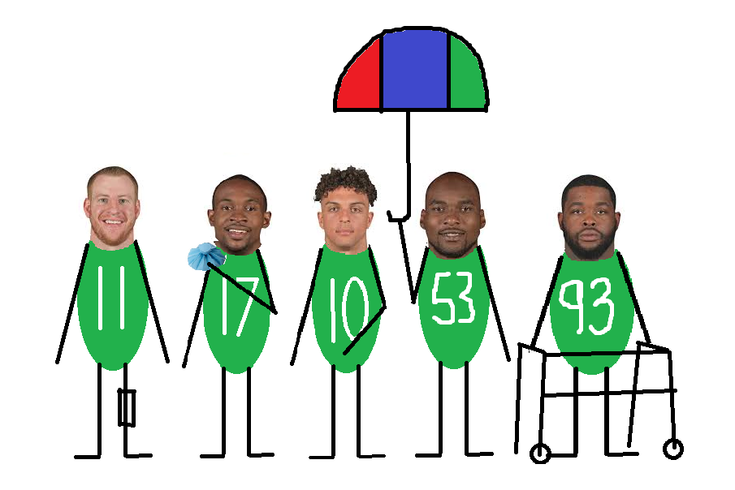 At no point during the 2018 NFL season were the Philadelphia Eagles ever a healthy football team. From Week 1 through the divisional round of the playoffs, the Birds played through a never-ending string of injuries, which we'll show in week-to-week form, with stick figures.

Usually when a new season begins, most teams around the league have a roster full of healthy players, ready to go for the upcoming season. The 2018 Eagles were an exception, as they were missing a whole slew of players for their opener against the Falcons:

• QB Carson Wentz: Still recovering from ACL/LCL surgery that was performed in December of 2017.

• WR Alshon Jeffery: Still recovering from rotator cuff surgery that was performed during the offseason.

• LB Nigel Bradham: Suspended for 1 game for being arrested for assaulting a cabana boy over an umbrella.

• DT Timmy Jernigan: We still don't know how Timmy hurt his back, but he won't be back until Week 12.

• TE Richard Rodgers: Injured his knee on a touchdown reception from Nate Sudfeld in the preseason, and went on IR. He'll eventually return later in the season. 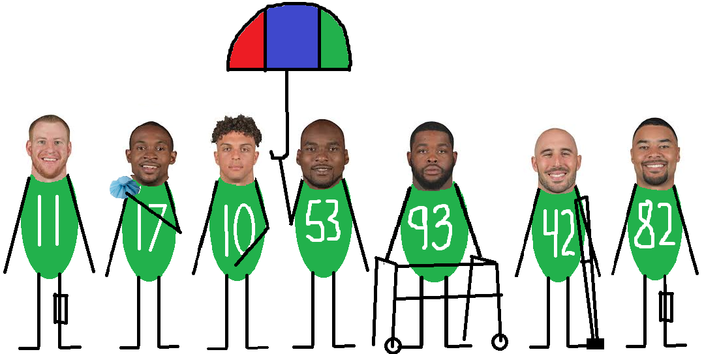 Losses: In the Eagles' win over the Falcons, they lost Darren Sproles. He'll be "day-to-day" for the next three months.

Losses: In the Eagles' loss to the Buccaneers, Jay Ajayi went down with a back injury (later revealed to be a fracture in his back), and Mike Wallace broke his fibula.

Losses: In the win over the Colts, Rodney McLeod was lost for the season with a torn ACL and MCL, while Corey Clement was a surprise inactive with a quad injury. Bad week for the blond tips faction of the locker room.

Gains: Jeffery made his season debut in this game, and Ajayi returned from his back injury.

Losses: Derek Barnett missed this game with a torn rotator cuff. Haloti Ngata is now also out with a calf injury.

Losses: Against the Vikings, the Eagles lost Ajayi for the season with a torn ACL. They also lost some more role players, in Corey Graham, Nate Gerry, and D.J. Alexander.

Losses: In the win over the Giants, Sidney Jones was lost with a hamstring injury that will bother him the rest of the season.

Gains: Barnett returned for this game, but his season will soon be coming to a close.

Losses: After trying to play through a torn rotator cuff, Barnett had surgery after the Panthers game. He's now done for the season.

Gains: The Eagles did get Ngata and Alexander back for this game. (Party emoji).

Losses: Jalen Mills suffered a foot injury in London that the Eagles tried to downplay, but his season is now over. Mills will go from walking around in a walking boot, to using crutches, to wheeling around in a Roll-A-Bout over the next few months. Oh and Lane Johnson is out (for just one week) with a knee injury.

Gains: The Eagles rushed Jones back for this game, which will end up being an ill-advised decision. Graham and Gerry will return as well.

Losses: Against the Cowboys, Ronald Darby tore an ACL, and Josh Perkins hurt his knee. They both go on IR.

Gains: Johnson returned to the lineup, and Rodgers was activated off of IR.

Losses: Aaaaaand the Timmy Jernigan return was short-lived. After warming up, he could not go in this game.

Gains: Jones is back (again, temporarily), and OMG, what's this?!? Darren Sproles is back after three months of being "day to day."

Losses: None. A first for the season. Maybe we'll just pick this as the time Mills went from a walking boot to also using crutches.

Losses: Oh boy. The big one. Carson Wentz is now out with a back injury, and he's done for the year, only nobody knows it yet.

I'll never forget the day Doug Pederson announced that Wentz was hurt. He started off the press conference by saying, "Good morning. So before you ask, I'm going to run down the injuries for you for today. That way I don't have to go through every single one of them."

Wait, what? If you've ever watched a Pederson press conference, you'll know that he never just volunteers that stuff without being asked, and even when he is asked, he'll often be very dodgy.

"Saves a lot of questions," Pederson continued. "So let's start with the defensive line: Tim Jernigan; he's doing better. Obviously, day-to-day. We'll evaluate him today and see where he is. You know about Corey, Josh, Jalen. Made those decisions to put them down. Avonte Maddox is improving. Again, he's day-to-day. See how he gets through today, and there is a chance he practices, but, again, we'll see where he is physically. Jordan Hicks, another one that's improving. Still day-to-day. See where he is again after today and tomorrow with a couple of workouts. A new one: Carson has a little bit of back soreness, a little tightness, so we're going to rest him today. Continue to evaluate him and make sure he's good. But we'll have more information on all these guys later in the week. Is there anybody else?"

Lol, what? Carson is hurt?!? And you're just going to pretend like you're giving us the list of injuries like it's Christmas or something, and you're just sliiiiiding Carson in there at the end?

Oh, and Isaac Seumalo is now out with a pectoral injury, and so is Jones for like the 12th time this season. Josh Sweat goes on IR and is done for the season, as does Jordan Mailata.

Gains: Maddox is back.

On a side note, the Eagles convincingly beat one of the teams playing in the Super Bowl while missing 16 players, including 11 starters.

Gains: Jernigan returns, as does Hicks.

Wildcard Round: Eagles vs. Bears

Division Round: Eagles vs. Saints

Losses: None from the previous week, though the Eagles lost a boatload of players during this game, including Brandon Brooks, Peters, Jeffery, Fletcher Cox, Brandon Graham, Michael Bennett, Chris Long, and Rasul Douglas.

It's amazing that the Eagles were one of the final eight teams standing this season.