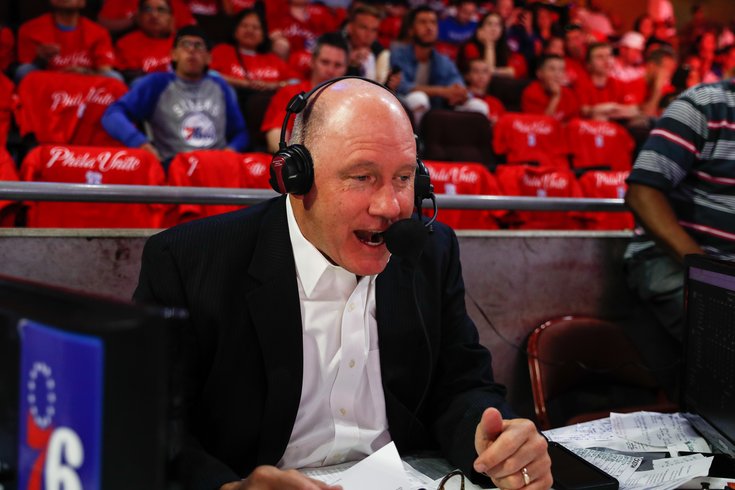 They all know him. He makes sure to shake every outstretched hand, and there are many, from the ushers, to the standing security that police courtside, to the players, to the coaches, to media asking to speak with him. Tom McGinnis, the man behind the booming voice that makes every car radio grill come alive each time the Philadelphia 76ers play, seamlessly wends his way through the Wells Fargo Center with a silver thermos of piping hot coffee in his right hand and a stack of stat sheets clutched in his left.

He’s walking toward his usual perch in Section 112, where he’ll broadcast the special Saturday matinee game in February between the Joel Embiid-less Sixers against the visiting Portland Trail Blazers.

He likes to meld in. For McGinnis, it works.

What can’t get lost, however, is how much of a treasure McGinnis is.

His trademark “Are You Kiddin’ Me!” has been echoing throughout the Delaware Valley for 24 years now. He’s debatably one of the most under-appreciated sports broadcasters in the rich history of Philadelphia sports radio, certainly deserving of being on the same broadcasting pantheon with Harry Kalas, Whitey Ashburn, Merrill Reese and Gene Hart.

McGinnis’ reservoir of energy is boundless. The shame of it is that fans are only able to absorb his brilliance and passion chunks at a time, since they’re catching McGinnis often when traveling from one place to another.

Half of the NBA play-by-play radio broadcasters fly solo. Though McGinnis is so full of vim, he actually doesn’t need a wingman. He’ll park his suit jacket on the seat beside him, literally roll up his sleeves and get to work.

You have to be able to paint a picture and tell the story of a game. You see it and you say it. Tell stories... That part is easy. For me, I’m describing what I see.

“I just love the game,” said McGinnis, 57, who started with the Sixers in 1995 and has been through some brutal times with this franchise before the team’s recent renaissance as NBA title contenders. “I know how hard it is for these guys to do what they do, and this is what I do — my take on the game. It’s kind of like being shot out of a cannon, where you have to communicate clearly and change your tone and speed. You can’t play at one speed all of the time and be able to tell stories.

“You have to be able to paint a picture and tell the story of a game. You see it and you say it. Tell stories. How often do we hear that? That part is easy. For me, I’m describing what I see.”

He knows how to break down a game. He possesses a supremely keen eye, and innate knowledge when to accentuate words. When you listen to him, you’re not only seeing the Sixers through McGinnis’ words, you’re also being educated.

Perhaps right now in Philadelphia, no one describes a game better than McGinnis. There’s certainly no one around today, whether it’s local or national, who can get more information out in 30 seconds than McGinnis. Of course, he doesn’t want to hear that. His Midwestern humility, emanating from Spring Valley, Ill., a tiny coal-mining town of roughly 5,400, and his late father, Phil, wouldn’t allow chest thumping.

Yet, on this Saturday in February, the only show is McGinnis.

The Sixers stayed close for a half, then were outscored 41-26 in the third quarter. The Sixers’ 130-115 loss to Portland on February 23 is their worst home setback this season.

The guy distributing it for those at home and on the road took it as hard as the fans around him. That’s because speaking into a mic, you would swear McGinnis is talking to you, or you, or you, or any number of imaginary people in front of him.

“I try to be a little more in tune with trying to describe everything, the colors, the action, the ebbs and flows of a game, there is a lot of stimuli out there,” said McGinnis, a high school basketball star at Saint Bede Academy, in Peru, Ill., who grew up watching the Chicago Bulls at the old Chicago Stadium. “Sometimes you have to condense that and leave things out on purpose in order to deliver a message with more clarity, so somebody who’s doing something else besides listening to the radio, they can understand what I’m saying because of the delivery.

“The pacing comes when you know you just went off three times on Embiid dunks and there’s still five-and-a-half minutes to go in the game, and J.J. Redick hits a three and it’s a big moment, a big-impact bucket, but you know if you blast it, your voice might crack and there’s still five-plus minutes left. That’s when you call the play. You always bring an intensity to the table.” 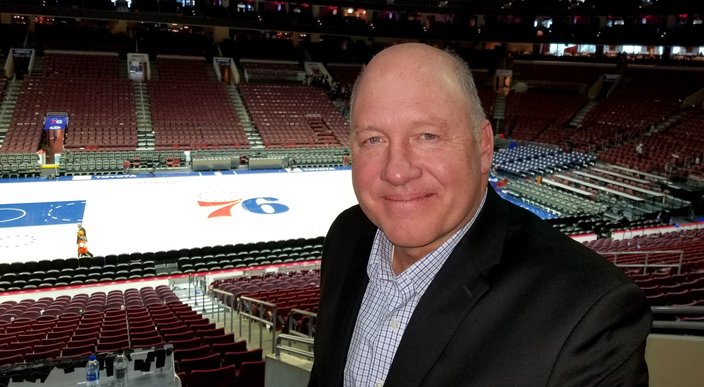 As the Portland game begins to unravel, it’s McGinnis who notes with 10:43 left in the third quarter that the Sixers have to do a better job on the defensive boards. The Trail Blazers would eventually outr-ebound the Sixers, 53-33, pulling down 19 offensive rebounds without Embiid there to stop them. With 9:24 left in the third, Boban Marjanovic misses a gimme’ eight-footer, to which McGinnis exclaims, “That, my friends, was not pretty!”

After a C.J. McCollum slam with 8:45 left in the third gives Portland a 70-60 lead, McGinnis begins motioning for a ‘TO,’ with his hands and seconds later, Sixers’ coach Brett Brown calls a timeout. About 13 seconds later, McGinnis explodes with that deep baritone voice, “You can clap your hands, you can pound the floor, but you can’t stop Jimmy Butler!” after a Butler slam pulls the Sixers to within 70-62. With less than six minutes in the third, McGinnis spots Embiid in the hallway behind the Sixers’ bench and lets the fans listening know it, almost wishing the 7-footer, out with a sore knee that game, were playing.

As the third quarter winds down, it’s McGinnis who exclaims, “Defensive rebounding is killing the Sixers,” then follows with, “The Sixers are standing around.”

As Portland builds a 111-89 lead with just over eight minutes to play, no Sixer is around to defend the Trail Blazers’ Enes Kanter, “The Sixers give Kanter all kinds of room and Kanter throws one up from the navy yard,” McGinnis tells the fans. After another Sixer turnover, the veteran broadcaster throws up his hands in frustration.

I still take games home and catalog them in my brain. I’m fortunate that I love what I do... It’s a pretty fun job. It’s why I bring the energy and the passion.

McGinnis concludes by letting everyone listening know “No Joel Embiid — and it shows.”

His candor, a relic by today’s sports broadcasting and sports journalism standards, is refreshing.

“I am a fan, and look who sits around me, season-ticket holders, they think the same things as me,” McGinnis said. “To me, it’s okay to be objective. You might get down on a certain player, provided you don’t pile on. You have to think about this game as in the past, and the next game is a new story.

“Now I deflate and don’t have to ratchet it up again until the next game.”

After high school, McGinnis realized quickly that his future playing days weren’t going to include the NBA. So after a few years of playing at Benedictine University, an NAIA school in Lisle, Ill., he transferred into Northern Illinois, in DeKalb, Ill., where McGinnis was one of 20 students accepted to the television program. By 22, McGinnis was the weekend sports anchor in Charleston, S.C., covering the Citadel, minor league baseball, and The Masters for three years.

From there, he got a gig in Florida, and used to drive back and forth from Florida to Atlanta, Ga., because he still had a hankering for basketball. He simulated calling an NBA game on Feb. 25, 1989, between the Dominique Wilkins’ Atlanta Hawks and Michael Jordan and the Chicago Bulls and sent a tape to the Continental Basketball Association. Soon after, he was hired to cover the Cedar Rapids Silver Bullets and John Starks.

Once again, he was on the bus with a basketball team, pouring over his homework on his knees sitting in the front of a dimly lit bus, making $75 a game. From Cedar Rapids, he went to La Crosse, Wisc. to become the voice of the CBA’s La Crosse Catbirds, where he met a dear friend and future NBA coach, the late Flip Saunders. McGinnis even did the laundry for an extra $75 a week.

“Being in the CBA was great training and it helped me establish my voice and get what I call at-bats, like a minor leaguers needs at-bats to hit a big-league curveball,” McGinnis recalled. “I got all of this experience and the CBA was a great experience, but I would always go back to Charleston, and I applied for a job covering hockey for the Charleston Stingrays.

“That led to a job covering the Cleveland Lumberjacks in the International Hockey League, which also played in the same arena as the Cleveland Cavaliers.”

While in Cleveland, McGinnis became acquainted with Dave Dombrowski, the Cavs’ Director of Broadcasting, and Tom Chestnut, the former President of the Cavs. When then-Sixers owner Harold Katz hired Chestnut as Sixers’ Executive Vice President, Chestnut, who played at Princeton and pick-up games with McGinnis in Cleveland, suggested they hire McGinnis as the team’s announcer in the summer of 1995.

“I still take games home and catalog them in my brain,” McGinnis said. “I’m fortunate that I love what I do. I still self-correct. It’s a pretty fun job. It’s why I bring the energy and the passion.”